Paris Attacks: If IS faces setbacks, may react with more terror 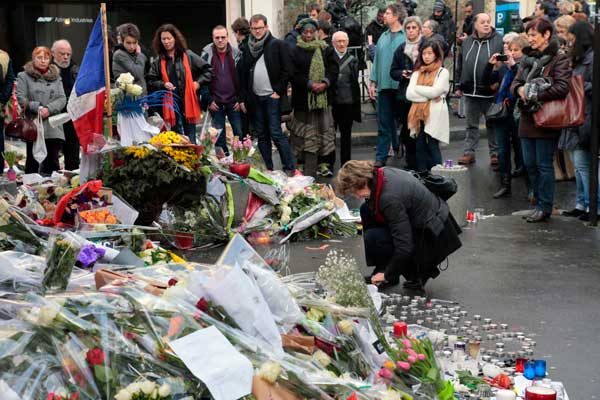 The serial terror attacks in Paris on Friday, which left more 127 dead and many more injured, was the third terror incident in recent times and by far the largest ever in France.

They were obviously meticulously planned. The attackers had chosen their targets with care. The attackers are dead and it will be sometime before their identities can be established.

The Charlie Hebdo attack in January was a warning from Islamic State terrorists indicating that cartoons about the Prophet Mohammed were not acceptable.

The Charlie Hebdo attack in January was a warning from Islamic State terrorists indicating that cartoons about the Prophet Mohammed were not acceptable.

They were more than that for those who wanted to read the signals. They were about establishing IS presence in Europe and a warning that France had been active in suppressing the Islamist movement in Libya, where they had established a “wilayat”.

The second attack on the Amsterdam-Paris Thalys super-fast express train in August was underplayed by some as a criminal attack, but many suspect it was an attempt by the IS to massively disrupt the transportation system.

The latest attacks, like the previous two, were more than just plain terror. They are attacks on the French (or Western) way of life and its values. The immediate provocation may be a reaction to French involvement in the air strikes against the Caliphate in Syria.

If Charlie Hebdo was an attack on French liberal values, the Thalys attack was an attack on European modernity and technological prowess. The latest attack can be seen to have carried several messages.

The attack near the Stade de France, where a France-Germany soccer match was being played and President Hollande was watching, was a message to him personally and to the French state. The three explosions outside the stadium were followed or accompanied by serial shootings in different parts of Paris.

A Cambodian restaurant, a French cafe and a McDonald’s outlet were attacked in the 10th district, while hundreds of people watching a concert at the Bataclan theatre in the 11th district were taken hostage. Ironically, the audience was watching an American rock band called Eagles of Death Metal.

The attacks were on the French or Western way of life, for its support to the US in Syria, and coming as it does one month before Christmas and a few weeks before the Climate Conference, they are meant to instil fear in the French and keep tourists away from France.

This is what my daughter, who lives in France and with whom I watched reports about the horror on TV, wrote on her Facebook page: “(Allah O Akbar) God is Great – True…but no God could possibly condone what happened in Paris yesterday. This not the work of a Great God but of cowardly men.”

…the international community has been unable to even define terrorism thereby weakening its response to this menace.

Hope is in the Twitter reactions from Parisians, who are not generally known for their friendliness or their hospitality. The most popular thread on Twitter in France last night was “fusillade” which means shooting. The second most popular was #PorteOuverte or Open Door, which gathered more than 550,000 tweets by Saturday.

As the metro shut down and the President declared a state of emergency, people were advised to stay indoors, offers poured in from unknown strangers to let stranded people stay the night in their homes, be it in their guest rooms or on sofas.

While certainly horrified at what is happening, this is not what “terrified” people do – invite strangers into their homes at night. A sign that the terrorists are not winning and a heart-warming reminder of humanity in a world gone crazy.

The response of the French state and the people has been commendable. In this day and age, the unfortunate truth is that despite all security measures, terror attacks will happen but a swift and positive response by the French government to an incident of this magnitude is clearly worth emulating.

Everyone, including the citizen, knew what was to be done. There was no panic in the stadium, there were no gory pictures of the dead or wounded, no TV clips showing grief, no ambulance chasers and no one scoring political points. It was depicted as it was – a national crisis that had to be dealt with nationally.

It is possible that in case the IS faces more setbacks in Syria, it may react with more terror in Europe. Reverberations could be felt further afield.

Recriminations were for later. All this in sharp contrast to how we react to terror or crime in India.

This horrible incident, similar to the Mumbai attacks of 2008, is bound to renew the debate about terrorism and ways of handling terror, where the international community has been unable to even define terrorism thereby weakening its response to this menace.

There will certainly be renewed interest about Western (US) policies in the Middle East and about Islam. Just last week, Ayaan Hirsi Ali and Manal Omar were debating in the Foreign Policy magazine in which Ali argued that Islam was a religion of violence while the Omar countered this.

It is possible that in case the IS faces more setbacks in Syria, it may react with more terror in Europe. Reverberations could be felt further afield. One extremism leads to another, and that is a measure of its success. This latest incident will exacerbate the debate and reaction to the refugee issue in Europe and the right wing in Europe will gain ground.