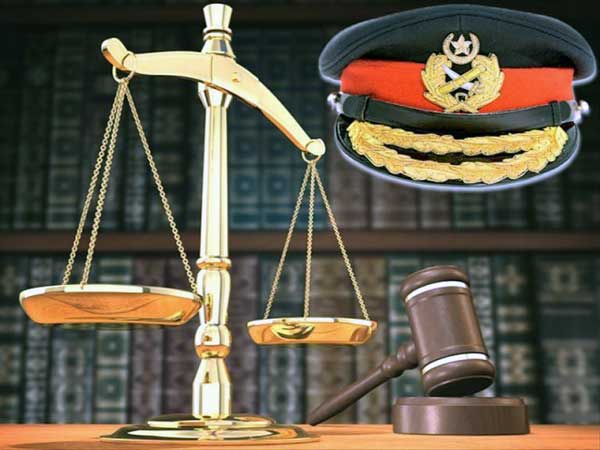 Pakistan is presently going through a judicial crisis of sorts! The Pakistan Army is refusing to let go of its Military Courts even though their instituted term including one extension is over. It may be recollected that Military Courts were instituted in Pakistan in January 2015, with a constitutional amendment, as a response to the terror attack on a school in Peshawar. The objective was to speed up trials of those suspected to be linked with terror related activities.

It was argued, at that stage, that the courts entailed a superimposition on the judicial framework of the nation while also breaching human rights guarantees. The move also amounted to an admission that the judicial system in the country was not performing satisfactorily.

It can be safely presumed that the Courts were set up due to pressure exerted by the Army which no political entity in Pakistan has ever been able to withstand. For the sake of political probity the courts were projected as a temporary measure. The Constitution amendment laid out a two year sunset period after which the amendment was to lapse.

Having got what it wanted, the Pakistan Army unleashed a rein of judicial terror! Hundreds were sentenced to death or to prison terms without releasing information about the trial, including names of the so-called convicts or the charges under which they were tried. Even the duration of the prison term awarded was not made public and there was no system of appeal instituted. The appeals lodged in civil courts by the lawyers of the so-called accused spoke of coercion to get confessions and lack of legal access being provided.

Many terrorists did meet their just end but the fact that many innocents were also taken into the dragnet cannot be denied; it is here that the fallacy in justice prevailed as the right to a fair trial was undermined.

On expiry of the denominated two year term in January 2017, a superficial exercise of handing over the pending cases to anti-terrorism courts was carried out, but soon enough the Nawaz Sharif government announced an extension for another two years.

Now that the extended term is also coming to an end the ball is in the court of the Imran Khan led government. The Pakistan People’s Party (PPP) has announced its opposition to any further extension of the term. “We have serious reservations about extending the tenure of the military courts.  Joint Investigation Teams have already been militarised, so we don’t want to (further) militarise our judicial system,” stated a spokesperson of the PPP.

The Pakistan Army has laid down its position with a tongue in cheek response. “Lawmakers can decide on the fate of military courts keeping in view the current [security] situation, and their impact. We will do what Parliament tells us,” says the Pakistan Army spokesperson. The key to the statement lies in the assessment of the “current security situation!” such an assessment is carried out solely by the Army with parliamentarians expected only to nod in unison. Hence, the Military Courts will be set aside only if the Army Chief so desires and there is no indication that he would desire any such thing.

Two relevant questions can be posed here. First, what have successive Governments in Pakistan done over the last four years to boost up the judicial and administrative process in a manner that would make it capable of taking on its responsibilities? The answer is – Nothing! Second, is it not proven without doubt that neither military courts nor the political leadership of the country has been successful in eliminating the cult of terror in the country, so why carry on with such overreaching powers to the Pakistan Army? At least the judiciary should be allowed to function in a manner that is in line with international norms.

On the one hand the Army looks for overreaching powers to deal with so-called terrorists and on the other it prevails upon the government to protect such militant organisation that it is nurturing as strategic assets. It is well known that Imran Khan has not extended the presidential ban on the well known terrorist organisation the Jamaat-ud-Dawa and its sham subsidiary the Falah-i-Insaniyat Foundation (FIF). No prizes to guess as to where the instructions to legitimise these organisations came from! Other militant leaders like Noor-ul-Haq Qadri and Syed Sallahuddin are given unhindered leeway to continue with their activities. So where are the military judges when all of this is going on?

It is quite amusing to note the manner in which the Pakistan Army is looked upon in the country as a guardian angel. Nawaz Sharif was prime minister under the blessings of the army as is Imran Khan now. The Army changes governments, runs the judiciary and lays down policy, all in the name of ensuring the security and well being of the people.

The reality is that the Pakistan Army likes to function with unhindered power! The Army Chief, General Qamar Bajwa, talks of giving priority to development over security but does nothing concrete in this direction. The lack of forward movement is attributed to the inefficiency of the government that is being changed with consistent regularity. With PPP and PML (N) having served their terms under the goodwill of the Army it is now the turn of the Imran Khan led Tehreek-e-Insaaf to play the puppet!

The world is quite aware of the sham that is being played out in Pakistan! It is no wonder then that nobody is coming forward to bail out the bankrupt country. It is fast losing whatever little self respect it ever had. If Pakistan has o survive then its government and its Army will need to show some respect for democratic institutions and processes. Subverting the same for vested interests is not going to help. A good way to start would be to abolish the military courts and give the judiciary the place that it deserves in all civilised countries.