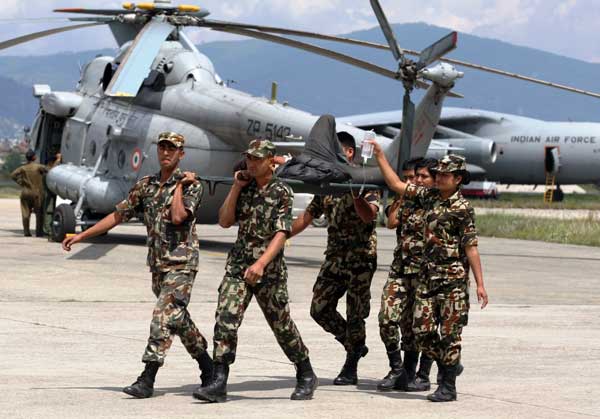 The former Army Chief, General Bikram Singh in one of his speech to a select gathering had said, “More often than not, the first responder to a national crisis, the Army’s professionalism was aptly demonstrated during the Uttarakhand tragedy”. Undoubtedly it holds true even in case of floods in Kashmir of September 2014 and recently this year in Yemen and now currently in Nepal.

We must continuously introspect and evolve for better. Latest natural calamity was witnessed in Kashmir and the “First Responders” did an excellent job. Surprisingly though some of those who had lost everything in the floods and stood at the verge of annihilation suddenly turned averse and started throwing stones at those who came to save them. This did not show up the very first day but a few days later as the intensity of media reporting increased day in and day out 24 x 7. Journalist going berserk while reporting and portraying military as if they were the saviours directly sent by the god himself. In doing so they overstepped the Kashmiri self-pride.

…the foreign ministry should take immediate measure to ensure that the Nepalese army appears in charge. Indian armed forces should seem to be standing in their support role rather than making them appear to be playing our second fiddle.

Off course the situation of Nepal cannot be compared to that of Kashmir. While the latter is suffering from secessionism bearing complex regional and political dimensions, such is not the case with Nepal. It is a sovereign country that has recently shed monarchy in favour of parliamentary democracy. We all know there was a Maoist led insurgency that toppled the monarchy. And India during the course of struggle did not find a favourable place in the new emerging ideology. There have been a large number of incidents of locals violently targeting Indians and their businesses in Nepal. The suspicions of India meddling into the internal affairs of that country run deep amongst the Nepalese, something that is not hidden from any one.

Under this backdrop our Indian television camera crews are busy capturing each moment of the tragedy. People sleeping on the streets, bodies showing themselves out of the rubble, terrified women and children and of course the Indian armed forces personnel leaving no stone unturned in helping out our neighbouring brethren.  All this definitely make a TRP perfect audio video bites. Unfortunately though they seem to have forgotten that they are not shooting in India but in a foreign country.

I feel it is unfortunate that all the military operations are being projected as if they were being conducted in one of the Indian states. It is imperative that the government of India take cognisance of this and issue an advisory to our journalist fraternity to exercise restraint and be sovereignty sensitive. And on its part the foreign ministry should take immediate measure to ensure that the Nepalese army appears in charge. Indian armed forces should seem to be standing in their support role rather than making them appear to be playing our second fiddle.

I am concerned of us losing the perception battle to an over exuberant media. It’s time for some self-regulation and media restraint.

7 thoughts on “Nepal Quake: Risk of Loosing the Perception Battle”