Nepal: China on a Rescue Mission 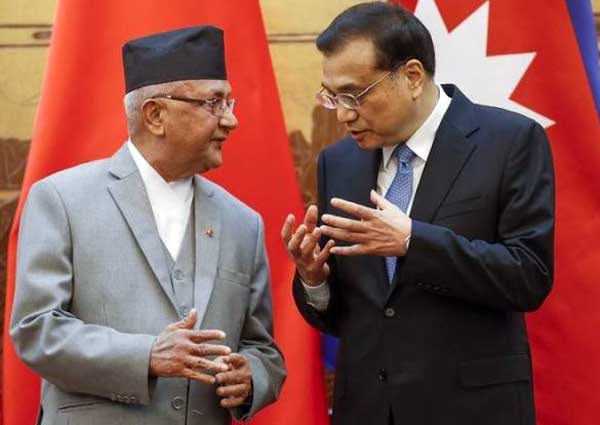 It looks that China has been taken by surprise on the developments in Nepal which culminated in Prime Minister Oli  convincing the President to immediately dissolve the Parliament giving no chance for an alternate government to be formed. Surprising, that Oli had not tendered his resignation though technically he becomes a Care Taker Head as he is no longer a member of the Parliament.

The Chinese Ambassador Hou Yanqi met President Bhandari soon after dissolution but significantly not PM Oli and we had reported this in our previous paper on the developments in Nepal.

The Chinese Ambassador met Dahal on the 24th December and on 25th Madhav Nepal who was appointed as the Co. Chairman of the Dahal faction as well as two other former Maoist leaders of the Dahal faction, Krishna Bahadur Mehra, former Speaker and Barshaman Pun.  It turns out that the ambassador had enquired whether there was still room for re uniting the Party leaders.  She was perhaps assessing the future course of action.

When the Chinese Ambassador failed to reunite the parties, China sent a four-member delegation led by Gao Yezhou, Vice Minister of International Department of CCPC on the 27th.  Gao is not new to Nepal and has been involved with Nepal for quite some time.  In 2018 he visited Kathmandu to oversee the merger of the Maoist Centre and the CPN UML into NCP (Nepal Communist Party) that subsequently swept the polls to form the Government.

The Spokesman of the Chinese Foreign Ministry Zhao Lijian in reply to a question said in Beijing that the Chinese Communist Party upholds the inter party relations of independence, complete equality, mutual respect, non interference to each other’s internal affairs.  He further added that the delegation had come to discuss issues like prevention and control of epidemic, governance, co-operation, development and deepening exchanges between Chinese and Nepali political parties. All lies!

If it was on the Wuhan virus and its management or about governance, where was the need for the delegation to meet leaders of the rival faction including Dahal, Madhav Nepal and Jhalanth Khanal?

This gives the impression that the task of the Gao delegation was mainly to patch up the differences between the two warring factions- that of Oli and Dahal and form an alternate government, thus  keeping the party intact.  Earlier, Gao called on the President and Prime Minster Oli.

Looking back, it looks that the sudden move of the Dahal faction to move a no confidence motion against Oli on 20th morning had the blessings of China.  At that point, Chins had decided to dump Oli but the latter  instead of meekly accepting the inevitable, chose to take the offensive and get the Parliament dissolved with the help of the President!

Gao’s first task was to get Oli  rescind the recommendation he made to the President  to dissolve the House.  An indication to this was seen in the statement made by Madhav Nepal who declared in one of the Public Meetings subsequently that they are “ready to forget everything if Oli accepts his mistakes and the dissolved Parliament is restored”.

Unconfirmed sources indicate that Oli refused to rescind the recommendation made to the President and thus oblige Gao and his delegation.

The matter is now left to the Supreme Court to decide on the legality of dissolving the House.  The Supreme Court Bench led by Chief Justice and four others took up the case on 25th of December.  The four other Judges were not chosen by seniority as two other senior ones were said to be Oli appointees.

The Court in one of its first orders wanted the Office of the President to give a written justification for the move to dissolve the House.

The Court also sought the original copy of the no confidence motion moved by the rival faction and the exact timing of the registration of the motion.  The timing is crucial.  If it was 10.30 A.M., as is amde out by some, Oli’s action was malafide in going to the President in getting the House dissolved.  If it was at 3.30 P.M., that is, after the President dissolved the House, then the  motion has validity.

The Full Bench of the Supreme Court has also appointed a seven member ‘Amicus Curiae’ to advise the Court on the legal provisions of the Constitution.

Some observations on the ongoing developments could be made.

The next date for hearing of the Case is on Jan. 7th and with so many legal Constitutional points to be decided it may take a while for the Supreme Court to decide on these issues. It is going to take a long time.  Henceforth until the issue of “dissolution” is decided, every action of Oli will be challenged in the Court.  Good Governance if there was any, will be the main causality.

The country is already suffering from the Wuhan Virus and the political turmoil now experienced will pull the country in further uncertainty.

The turmoil will also inflict a big economic cost and will also hold back economic development.

The country can hardly find funds for day to day governance let alone for conducting election within 120 days of the dissolution.  The voter’s list will have to be revised and according to the latest Court orders, the migrants are also to be listed and allowed to vote in the countries where they work.  This is going to be a stupendous task.  The political parties are against holding fresh Parliamentary elections.  A political consensus is necessary but is unlikely to happen.

The Chinese have been unusually active in openly meeting the political leaders and interfering in the internal politics of Nepal.  Earlier the valley politicians used to complain of Indian interference and now they are getting a taste of the meddling by the Chinese.   There have already been demonstrations in Kathmandu against Chinese interference.  Two reasons are being given for the brazen and open Chinese interference.  One is that it should be seen in the larger context in the World where the Chinese “Wolf Warriors” have been very aggressive.  One should look at the statements made by the Chinese Ambassador in Australia against the host Government.  The second could perhaps be that the active  involvement started soon after the Indian R&AW Chief visited Kathmandu openly some months ago and had a one to one meeting with Oli.  The details of the meeting are yet unknown to other politicians and Oli is suspect in the eyes of the rival faction.  For now, India has taken the right stand that it is an internal matter for Nepal to be sorted out by themselves.

It is very unlikely that the two factions of Oli and Dahal would patch up and allow another Government to be led by the Dahal faction.  Oli has so far remained adamant and is not likely to rescind his recommendation for the dissolution of the House.  The Party Split appears to be irreversible and reverberations are seen at the provincial levels already.  In three of the Provinces, no confidence motions against the Chief ministers have been moved and more splits are expected.  The Chinese attempt to patch up and keep the two factions united once again may not succeed, though the possibility of the Supreme Court cancelling the dissolution and allowing Dahal to take over may happen.  The possibility of the Nepali Congress and the JSP two other major opposition parties supporting one or other factions cannot also be ruled out.  But this may take a long time.

The tragedy is that a stable Government has fallen and the Ruling Party is headed for a split resulting in more uncertainty! It will  also be interesting to see how the Chinese are going to manage the Valley Politicians.