is a veteran who served in the NTRO as Chief Editor OSINT & Dy Director NTRO Training Centre and the NSCS as a Senior Defence Specialist. 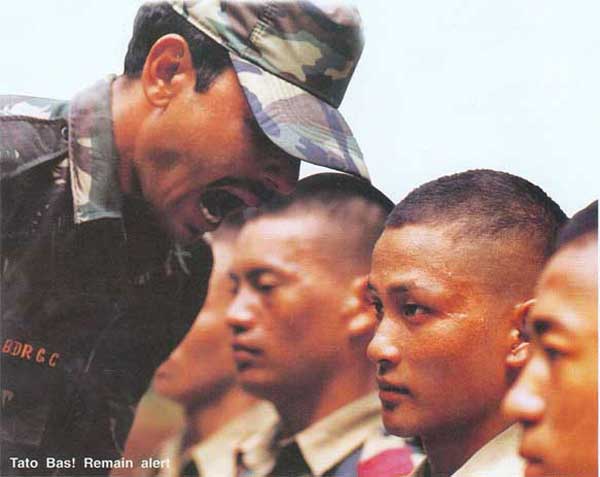 Indian military leadership over the period has matured into a real time ethical leadership. Credit goes to exemplary qualities possessed by some of our famous military leaders like General Zorawar Singh of Ladakh-Tibet fame, FM Carriapa, FM Sam Manekshaw, General Bhagat and Gen Sinha. The Chetwodian Credo of Conduct for army officers was followed in letter and spirit. Dictums and basic traits, required in ethical leaders and developing military leaders, were embossed in their blood, from the very first step taken by them at the time of commissioning.

The earliest recorded treatise on leadership is more than 5,000 years old. Lord Krishna, the strategic adviser took the Pandavas to pay homage to Bhishma and asked him to teach Yudhishtir, the art of leadership so that he could effectively govern the vast kingdom. Bhishma’s words of wisdom on leadership which hold good even today, were:

Character stands for self-discipline, loyalty, readiness to accept responsibility, and willingness to admit mistakes. It stands for selflessness and “Only a man of steady character and wisdom can carry out the task of leading and administering a kingdom effectively.”Kautilya’s Arthashastra has also highlighted the qualities of a military leader as that of ‘sharp intellect, strong memory, energetic, free from vices, dignity and foresight.’

Over a period of time the leadership style in the Indian Army today has eroded and, unfortunately, the current leadership appears to be ‘Positional’, short-term and a personal projection-oriented style of leadership. In simple words it means that it is by the virtue of being in command positions, and may not really be due to leadership qualities in some cases.  An ‘ethics crisis’ has crept into the army and, therefore, a clarion call for better ‘ethical leadership’  Core values of ethical leadership or military leadership, i.e., ‘character’ integrity, morality, courage and leading by example have been eroding. Ethical leaders embody the purpose, vision, and values of the organization and they connect to the goals of the organization.

To regain the erstwhile image soldiers must search into the soul and find out where they are going wrong? Deterioration in ethics and moral values has infiltrated in to our system to earn promotions and awards. Scams of all kinds like  ‘Sukhna Land Scam’, ‘Fake Encounters’, shadydefence deals and the like have provided the media enough fodder for Army bashing. Personal misconduct, moral and financial turpitude-related scams are on the rise. ‘Living off the land is becoming a culture by a few ‘climber officers’ who encourage this culture. The officer cadre in particular needs to share the blame for the present gloomy situation as some of them succumb to pressures, become spineless and fail to speak up, otherwise many of the current scandals could have been prevented. Damage has been done to the Army’s’ reputation and cannot be undone but certainly a mid-course correction can be initiated. On remaining Silent, Martin Luther said: “Our lives begin to end the day we remain silent on things that matter”.

Character communicates better than anything said or done. Interpersonal communication is directly proportional to the character of the leader. Therefore the crux of the problem is that interpersonal communication is reducing day by day due to the character factor and a constant effort is desired to be made in this direction to bridge the gap between the leader and the led. Leadership and knowing your men flow out of leadership qualities and how well one knows his men. ‘The leader should know his men better than their mothers do. Ethical leaders are open to others’ opinions and ideas.

Tact to differ is another important quality which is admired and those who possess it are held in high esteem. The qualities like courage of conviction, standing by the truth, tact to differ with seniors in the interest of the organization, loyalty to the organization are being forgotten. Those who blindly follow their seniors, a HMV(His Master’s Voice) tendancy or ‘Yes-Men’ in other words, find themselves on an upward career growth; they are climbers.  ‘Loyalty to the organisation’ and ‘Tact to Differ’ needs to be introduced for promotions to Colonels and above as potential for promotion in ACRs. Tact to differ is not being blunt and rude but is a quality which needs to be inculcated in our junior leaders so that they can express themselves freely without fear and with confidence.

In today’s materialistic world, ethics and values are varying and leaders have to be explicit about their own values and ethics. Some facets of ethicalleaders:

Give up Power to Empower by decentralization and delegation of responsibility through mutual faith and trust. If one cannot delegate, then one would keep oneself occupied all the while doing the smallest of the tasks.  If a leader cannot make others grown, he would no longer remain a leader. Never tell people how to do things.   Tell them what to do and they will surprise you with their ingenuity. True leadership lies in guiding others to success.

Integrity- Honesty. The supreme quality of a leader is his integrity and is most difficult to develop. Integrity is to be honest in personal and professional relationships, be trustworthy and inspire trust in people around you, be professional and be responsible for every action that you take. “If you have integrity, nothing else matters”.

A leader’s prime role is to lead people for a cause or a mission. A climber, on the other hand, uses people to succeed in his personal advancement.   An ethical leader, in the process of leading, injects pride, esprit-de-corps, cohesion, trust, confidence and happiness in the group he leads. A climber, on the other hand, generates distrust, disharmony, jealousies, stress and unhappiness.

“Real leaders make themselves accessible and available – the day soldiers stop bringing you their problems, is the day you have stopped leading them. – Colin Powell

We have to select the right leaders for the right job. The Indian Army’s institutional response has to be morally superior to that of the civilian society.  This can be achieved with an organisational climate and by espousing higher behavioural norms under exemplary leadership. Through this article a ‘Clarion Call’ is being given to the young future leaders charged with energy and enthusiasm to lead and win on the Road to Success towards ‘Onward and Upward Military Ethical Leadership’ through Character, Integrity, Morality, Courage and Leading by Example. ‘Military Ethical Leaders’ on their part must remember they still continue to carry the Nation’s Trust and must live up to the trust reposed upon them by its citizens.