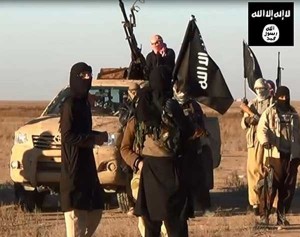 Anarchy is the best defined term to explain present violent Middle East. The actors in the current international system follow ‘the law of Jungle,’ [1] – either eat or to be eaten- which is the only principle of survival. In the past few years, the rapid shift in the violent conflicts in the different parts of the world and changing dynamics of the non-traditional  threats forcing the man kind to redefine the concept of security. At present, threats are not limited to the conventional wars, but it has moved further from the nuclear war to the chemical warfare.

According to CIA’s estimate, ISIS “can muster between 20,000 and 31,500 fighters across Iraq and Syria”. This new estimate highlights an increase in ISIS terrorists.

The emergence of extremist ideology based groups, that are technologically very rich and having a unified structure to rule a vast portion of territories which is under their control, has threatened the peace of international system. The emergence of Islamic state (Islamic State of Iraq and Syria) in the Middle Eastern region is the best suitable example of it, which is again challenging the sleeping peace of the region. There is an important reason to be threatened by this terrorist organization in the comparison to other organization. Namely, firstly unlike other terrorist groups, ISIS has unified structure of working, Secondly they are controlling a huge area which is bigger than even France, thirdly, they are not fighting from a room or a hidden place but fighting openly in the battlefield and receiving popular support from different parts of the world.

According to CIA’s estimate, ISIS “can muster between 20,000 and 31,500 fighters across Iraq and Syria”. [2] This new estimate highlights an increase in ISIS terrorists. There are also a huge number of those terrorist who are supporting it from outside. This shows that it is not going to be easy to ultimately overthrow ISIS. Till now, this ISIS named evil already has eaten Iraq and Syria, so who is next now? If all the pieces of puzzle would keep together it can understand easily that now clouds of ISIS’s attack is moving around the Jordan. The burning alive of Jordanian pilot in February authenticated this fact that ISIS is trying to involve Jordan in this conflict. In a response to immolation of Jordanian pilot by ISIS, Jordan joined the group of Arab states who are taking part in airstrike against ISIS. The surgerical operations by Jordan “may have hurt ISIS but Jordan’s retaliation has raised concerns that the country could be drawn into further confrontations”. [3]

…in February around 2,000-2,500 are known to have join Islamic State from Jordan. It is also fascinating to see how Jordan deals with its own citizens who joined ISIS.

It is also a fact that before the killing of their pilot, there was a sizable number in Jordan who did not want to participate in the American led anti ISIS coalition. According to a report by Guardian in February around 2,000-2,500 are known to have join Islamic State from Jordan. It is also fascinating to see how Jordan deals with its own citizens who joined ISIS. There were some voices in Washington who assumed that Jordan could take seat of the new leader of a Sunni Arab alliance against ISIS and send ground forces in the combat. On the other hand, the conservative Salafist leaders of Jordan and the Muslim Brotherhood openly opposed and criticised Jordan’s association in the anti Islamic State coalition, claiming it as a Western led endeavour against Islam. [4] According to Jonathan Broder “even moderates argued that Jordan’s involvement in the war would only provoke retaliation and draw the war into Jordan”. [5]

Meanwhile, Jordan is currently busy in handling the waves of refugees coming in from Syria. It forced Jordanian security services to mange food and shelter for refugees on one side and to prevent terror cells belonging to both ISIS and Al Qaeda’s Al-Nusra Front from springing up on the other side.[6] There are huge numbers of supporters of ISIS in Jordan and most of them are terrorists, who returned from Syria. In this situation, the most important concern emerged for the Jordanian security services to deal with these terrorist because they will try to expand their membership by creating splinter cells. The Jordan’s war against ISIS looks to be long and challenging because Jordan, a small country with fragile economy, “is already hosting more than 600,000 Syrians refugee”. [7] It has placed immense burden on Jordan which has limited resources.

…the increasing military power of ISIS is a warning call not only for the Middle Eastern countries but also for other countries of the world.

Therefore, the increasing military power of ISIS is a warning call not only for the Middle Eastern countries but also for other countries of the world. The way, in which ISIS is receiving support from other terrorist organizations like, Boko Haram (Nigeria), Tehrik-i-Taliban Pakistan, Jundallah, the Islamic Movement of Uzbekistan (Pakistan),The Islamic State of the Maldives (Maldives), Militants of the group Abu Sayyaf (Philippines, Malaysia) and Tehreek-e-Khilafat  highlights that now, it’s not time to discuss who did what? But need to form unity to deal with this monster.