Commissioned in the Executive Branch of the Indian Navy in July 1994, he is a specialist in Gunnery and Weapons Systems and has served on-board frontline ships. 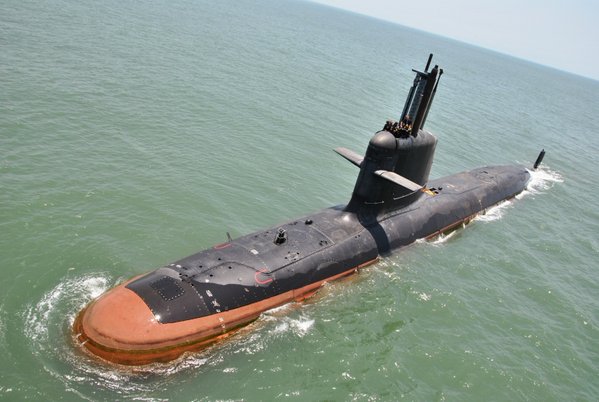 India’s submarine modernisation plans have long been a subject of conjecture and debate in the Indian strategic affairs community. After an August 2013 explosion gutted the INS Sindhurakshak – the Navy’s premier Kilo class submarine – there has been much introspection over the depleting status of its submarine arm. Unfortunately, with the Navy unable to stick to scheduled timelines in the Scorpene programme – its principal submarine project – all talk of revamping the submarine arm has sounded hollow.

Last week, however, brought some cheery news. As Kalvari, India’s first indigenous stealth submarine, commenced sea-trails outside Mumbai Harbour, there was renewed optimism among naval managers. The Kalvari is the first of six Scorpene-class submarines being built under the much-delayed Project-75. Its sail-around was widely seen as an important step forward in meeting the September 2016 target for the submarine’s commissioning.

Despite the absence of its “primary weapon” – ‘Black-Shark’ torpedoes – the Kalvari’s presence in the open seas emphasized India’s efforts at rejuvenating its indigenous submarine production programme. While the project has faced long delays, naval technicians and project-managers have worked tirelessly to meet construction deadlines. Kalvari’s appearance in the open seas last week consequently created new hope for India’s submarine ambitions.

The cheery tidings aren’t limited to the conventional submarine programme. Indian maritime watchers are pleased with the impending induction of the first indigenous nuclear-powered submarine, the Arihant. Having cleared its diving trials and missile tests, the Arihant could soon be commissioned into the fleet as India’s first nuclear ballistic missile platform (SSBN). At 6,000-tons of displacement, the new submarine is a unique technology demonstrator and showcases the best of Indian naval design capability. Even though it draws heavily from Russian technology and has a limited ballistic missile capability (its twelve indigenous K-15 Sagarika missiles have a range of only 700 kms) the Arihant’s commissioning is a milestone for Indian designers who have worked tirelessly for years to refine procedures for the submarine’s construction.

Needless to say, the prospects of the induction this year of two submarines – one conventional, the other nuclear ballistic – has caused a fair bit of curiosity about the Navy’s proposed submarine force structure, particularly in the wake of reports that India has been exploring the possibility of manufacturing nuclear attack (SSNs) submarines. At an international seminar in New Delhi a few days ago, a participant wondered why the Navy was continuing with its dependence on conventional submarines when most advanced navies have shifted to all-nuclear submarine forces.

Indeed, there has been a long-running debate in the Navy about the inherent attributes of an all-nuclear undersea arsenal. Notwithstanding the distinct advantages that nuclear submarines (SSNs) enjoy over their conventional counterparts (SSKs), an all-nuclear Indian submarine force, in the Indian context, is an essentially flawed idea. This is because a conventional submarine offers benefits in littoral waters that more than adequately offset its most glaring constraint – limited operating endurance. A diesel electric submarine’s biggest advantage is that it has a smaller hull that is easier to manoeuvre in shallow waters and harder to detect. The fact that it costs a fraction of the price for a typical nuclear submarine makes a diesel electric an irresistible proposition for a mid-sized navy. Its attractiveness is only enhanced by the ease of operation and the absence of the risk of dangerous nuclear leaks. Simply put, developing maritime states like India cannot afford to overlook the practical utility and effectiveness of an SSK in South Asia’s littoral spaces.

That said, nuclear submarines confer an edge to a fighting force that diesel electrics find difficult to match. The fact that SSNs are bigger, tougher, more heavily armed and longer-ranged than conventional submarines makes them indispensable assets. They can also perform functions that diesel-electric submarines generally cannot – like cross an ocean underwater and at high speed or remain submerged for weeks outside critical littoral spaces. The powerful weapons and sensors they host far outweigh the combat capabilities of conventional submarines.

In 1999, when the Navy first proposed a 30 year building plan for the construction of 24 submarines, it did not intend constructing nuclear attack submarines. The plan then was to construct six submarines each with Western and Eastern-stream technology in the initial phase, before undertaking the development of 12 conventional submarines of an indigenous design. Unfortunately, the plan failed to take off as intended. Many reasons have been attributed for the lack of success in its implementation: the apparent lack of funds, strong divisions within the Navy over the proposal for a mix of conventional and nuclear submarines, and the apparent absence of visionary leadership. Whatever be the reasons for its initial failure, New Delhi is now making up for lost time and opportunity by combining its ongoing construction of conventional submarines with a proposal to build six nuclear attack submarines.

Notably, barring some top-tier navies such as those of the US, UK and France, no other submarine operating force has completely done away with conventional submarines. While the SSK’s simple advantages like ease and quietness of operations have been a factor of interest, the past few years have seen technological advances that have helped diesel electrics overcome their traditional disadvantage of less submerged time before surfacing to charge batteries. Air independent Propulsion technology and fuel cells have made it possible for conventional submarines to remain underwater much longer than earlier.

Not surprisingly then, navies today prefer a combination of nuclear and conventional submarines, with each class filling in a specific role. Increasingly, modern maritime forces deploy advanced non-nuclear submarines like the German Type 214 for sensitive operations. Some European navies, like the Norwegian Navy, have prioritized procurement of non-nuclear submarines to carry out specific tasks, such as protecting the Arctic’s fringes. Expectedly, there have been offers to partner the Indian Navy in developing the design of the new class of nuclear-powered attack submarines. The US has made an expression of interest, though New Delhi is said to have its heart set on the new Baracuda SSN being developed by the French firm DCNS. Meanwhile, reports that New Delhi has approached Moscow for the lease of a second Akula class submarine (after the INS Chakra) has caused speculation of another India-Russia collaborative venture for the construction of SSNs.

India’s choice of partners for its tactical submarines, however, is independent of its efforts to develop a nuclear ballistic missile submarine. A cherished endeavour of the Indian defence scientific community for over two decades, New Delhi has invested a great deal of financial and political capital in making the dream a reality. After the Arihant, three more submarines in the same class are currently under construction at the shipyards in Visakhapatnam. There are plans for a fifth submarine that will incorporate improvements over the lead boat. While India’s “No first use” nuclear policy mandates the establishment of a “triad” of air, sea and land deterrence capabilities, policy makers and strategic experts appear convinced that the sea-based leg is the most survivable component.

Looking ahead, India’s future submarine fleet operations are likely to involve SSKs and SSNs operating in the littoral spaces, in a strategic environment sanitized and protected by SSBNs. If New Delhi can ensure compliance with present construction deadlines, it could put its submarine modernization plans back on track.