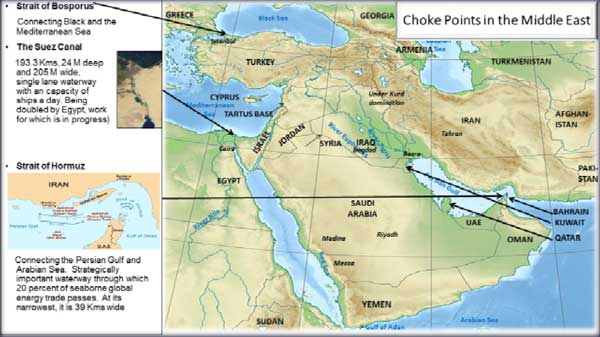 The Middle East today is witnessing both a direct strategic and military tussle between Iran, Saudi Arabia and Turkey as the regional powers in the Middle East and also proxy wars unleashed by them in the pursuance of their respective agendas for regional power predominance.

In terms of alignments of regional powers with external actors, the picture obtaining in 2016 is of Saudi Arabia and Turkey down- sliding into frayed and questionable ties with their erstwhile strategic patron i.e. the United States. Russia on the other hand continues with its strong security ties with Iran and Syria.

Iran in 2016, after belated recognition by the United States that it can no longer side-line Iran in the American strategic calculus and reaching recent accords, Iran has thrust itself as the naturally predominant Middle East regional power, much to the irritation and annoyance of Saudi Arabia and Turkey. In fact both Saudi Arabia and Turkey have been involved for the last couple of years in a proxy battle for regime change of the strongly pro-Iran Assad regime in Damascus, to limit Iran’s powerful strategic profile.

China as a major power has balanced its ties in the Middle East by synchronising a perceptibly equitable distribution of its strategic attention between Saudi Arabia and Iran. China’s distance from Turkey has perceptibly increased for some months from what emerged earlier as a robust strategic partnership.

India’s foreign policy challenges in the Middle East in 2016 need to be contextually viewed in the matrix of the above regional power-play and the interests of the United States and Russia.

Iran notably from the last stages of the Shah Regime and upto 2016 can be said to have been more circumspect in its dealings with Pakistan. In fact Iran which enjoys a Strategic Partnership of some substance with India has respected India’s strategic sensitivities.  Iran has creditably facilitated India’s transport linkages with Afghanistan via the Chah Bahar Port and onward transportation linkages for India into Afghanistan.

Complicating the Indian foreign policy challenges in the Middle East is Pakistan’s insidious propaganda against India’s increase in diplomatic interaction with the region is that India is a doubtful entity when it comes to providing security guarantees for the region.

India’s foreign policy challenges in the Middle East in 2016 need to be viewed on two different planes, namely, the diplomatic plane and the more significant politico-strategic plane.  On the diplomatic plane one has no quibbles in terms of Indian foreign policy initiatives for enlargement of the scope and intensity of diplomatic engagements with all the countries in the Middle East, big or small.

These two planes need to be borne in mind as Prime Minister Modi prepares for his forthcoming visit to Saudi Arabia. Some in Indian policy establishment would advocate stronger ties with Saudi Arabia over Iran going solely by trade figures. But then it has to be remembered that Indian trade figures with Iran suffered due to US sanctions. Has Saudi Arabia as Pakistan’s most ardent and powerful patron ever used its influence to moderate Pakistan’s brinkmanship with India?

On the strategic and politico-strategic plane of India’s foreign policy towards the Middle East powers in 2016, a lot needs to be said.

India’s foreign policy in the Middle East in 2016 must reflect India’s strategic preferences in terms of India’s national security interests based on the past demonstrated record of Iran, Saudi Arabia and Turkey, the respect that these three countries have accorded to India’s strategic sensitivities and lastly any current indicators available in 2016 which could prompt India to revise the order of its strategic preferences.

In a dispassionate analysis of all the three criteria stated above Iran clearly emerges on all counts as the “Strategic Most Favoured Nation” in the strategic calculus of India’s foreign policy challenges in 2016.Both Iran and India have strong strategic convergences in the past and if the Indian foreign policy establishment imaginatively manages the Iran-India Strategic Partnership, India could be said to be on the right side of history as far as its embedment in the Middle East is concerned.