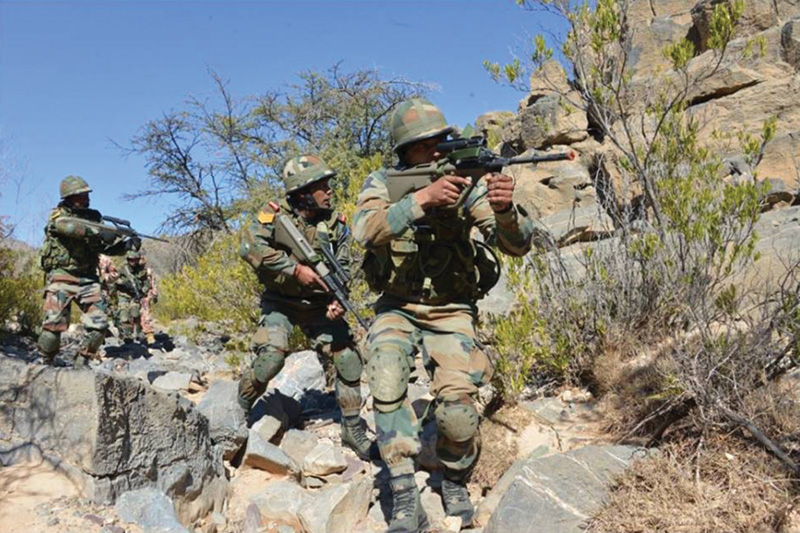 Timed with Chinese forces’ aggressive moves/misadventures against the Indian Army in Eastern Ladakh since May, Pakistani forces stepped up the ceasefire violations/unprovoked firing and bombardment, including targeting civilians in the border belt and induction of terrorists across both the International Boundary (IB) and the Line of Control (LoC) in Jammu and Kashmir (J & K). India shares a 3,323-km-long border with Pakistan, of which 221 km of the IB and 740 km of the LoC fall in J&K.

After the Indian Army’s surprise move on August 29-30 to occupy commanding positions on the Kailash Range on the south bank of Pangong Tso, in Eastern Ladakh (while Chinese have been shocked and frustrated), Pakistani forces went into an overdrive targeting India’s border-belt villages, particularly so in the run-up to Diwali. This overdrive meant many more incidents in many sectors of both cross-border firing and bombings and induction of terrorists to attack soft targets well inside the Kashmir Valley.  And with the abrogation of Article 370 in J&K and its status changed to Union Territory also being played up by released Kashmiri political leaders for the election, Pakistan’s desperation drove its forces to try to derail the democratic process by unabated frequent terror attacks, resulting in attrition of over 250 terrorists in 2020, till mid-November.

Over a period of at least a week in the run-up to Diwali (Nov 14), there were many incidents of the firing of small arms and mortar bombs in Uri, Poonch, Gurez and Machil, Dawar, Keran and Naugam sectors, causing deaths and injuries to many civilians, Army and Border Security Force (BSF) personnel. Both Army and BSF have been responding fiercely causing substantial damage to Pakistan military assets, as seen in some videos released by the Army.

It is relevant to look back at the pattern of ceasefire violations almost all of which are related to Pakistan’s decades-old drive to continue its fourth war against India by the export of terrorism.

Earlier in June 2020, the Jammu-based Defence Public Relations Officer informed that there were more than 2,000 ceasefire violations along the LoC in less than six months in the year 2020. As many as 114 violations were in the first 10 days of June, as compared to 181 in the entire June 2019 and 14 instances in the same month in June 2018. He further remarked that the 2020 figure of ceasefire violations was astonishing because in less than six months there were more than 2,000 violations. The total violations of a number of years till 2017 were not as many as those in the entire 2018. In 2019, there were over 300 more such violations than in 2018 and over three times those of 2017, when 971 cases were reported. In 2017, 31 people – 12 civilians and 19 security forces personnel – were killed and 151 others suffered injuries.

No let down during pandemic too

Despite the ongoing pandemic, including the lockdown period, the LoC continued to remain a war zone as there was no let down in terror. Rather they increased and it’s highly likely, at China’s prodding.

In August, BSF personnel detected a 150 yards long tunnel stretching from the Pakistani side of the IB to the Indian side near Samba meant for the purpose of infiltrating terrorists. Digging such tunnels across the IB is an old stunt of the Pakistan army/rangers. The nine battalions of BSF deployed on the IB in Jammu, recorded from January till October in 2019 and 2020, 185, and 314 violations respectively by Pakistan forces.

Early morning on November 19, four Pakistani terrorists of Jaish-e-Mohammed, who are reported to have come from Shakargarh, crossed the IB near Samba and then boarded a vehicle bound for Srinagar. At Ban toll Plaza in Nagrota, on the Jammu and Kashmir highway, there was an encounter between them and the security forces, in which after an exchange of fire, all four terrorists were killed. Two special operations groups of the J&K police were injured in the gunfight, which began at 5 am and also led to the closure of the Jammu-Srinagar highway. Also on November 19, three suspected Lashkar-e-Taiba terrorists were arrested by the security forces from the Rajouri district of J&K with a large cache of arms and ammunition they had received through drones. All three belong to South Kashmir’s Pulwama district. Police said they had gone to Rajouri to receive the weapons sent by drones from Pakistan.

On November 18, in Pulwama district, at least 12 civilians were injured when suspected terrorists lobbed a grenade on security forces. The grenade intended for the joint team of Jammu and Kashmir Police and the Central Reserve Police Force (CRPF) in Kakapora area of the district, missed the target and exploded on the road.

Owing to a large number of incidents spread over a large area in J&K, many cases of induction of weapons, including by drones and reports of Pakistan’s plans to launch a major attack marking 26/11 (the 2008 Mumbai attack of Nov 26 by LeT) and to sabotage the local elections, Prime Minister Narendra Modi on November 20, held a significant meeting with Home Minister Amit Shah, National Security Adviser Ajit Doval, and others. PM Modi tweeted: “Our security forces have once again displayed utmost bravery and professionalism. Thanks to their alertness, they have defeated a nefarious plot to target grassroots level democratic exercises in Jammu and Kashmir……..Neutralising of 4 terrorists belonging to Pakistan-based terrorist organisation Jaish-e-Mohammed and the presence of a large cache of weapons and explosives with them indicate that their efforts to wreak major havoc and destruction have once again been thwarted.”

India’s Ministry of External Affairs also issued statements and summoned Pakistan High Commission officials to warn them that Pakistan must dismantle terror groups, failing which India will be constrained to take action.

While the Indian Army, BSF, CRPF, and J&K Police are very alert and have been responding swiftly and sternly, the option of a rerun of 2016 surgical strikes on the ground and the 2019 airstrike on terrorist camps may indeed be considered.