India must speak up for oppressed people of Gilgit- Baltistan 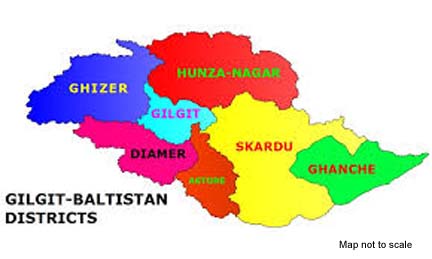 Recent video footage shown on televisions across the globe highlighted the atrocities being committed by the brutal armed forces on the natives of this erstwhile part of the Jammu & Kashmir state and now under Pakistan’s illegal occupation. It reminded of the gory tales of atrocities committed in the erstwhile East Pakistan now Bangladesh.

The global community is now evincing keen interest in the area, its people and their plight. The fact is that the people of this area have been leading a life of subjugation ever since 1947 but there was no media to highlight their miserable plight.

The print media occasionally tried to portray their problems, but very little heed was paid by the global community. Even we did not take much notice of the same despite the fact that they were citizens of the Dogra kingdom of Jammu & Kashmir that acceded to the Indian Union in October 1947.

At the time of partition, Gilgit and Baltistan were legal and integral part of the state of Jammu & Kashmir. In a treacherous conspiracy, Major Brown, a British, commander of Gilgit Scouts, mutinied against the Maharaja and brought the area under illegal administrative control of Pakistan in November 1947 after the Maharaja had signed the Instrument of Accession with India.

Many military historians wonder as to why India did not occupy the area despite the opportunity available during the final days of the war. After the ceasefire, in 1949, Pakistan in a master stroke kept Gilgit, Baltistan, Hunza and Nagar under its direct control rather than including them in Pakistan-occupied Kashmir (POK), or so called Azad Kashmir.

For reasons unknown, the government of India turned a blind eye to this legal and historic blunder by Pakistan. Thus, the people of these areas, mainly Shias, were left at the mercy of the Sunni–dominated Pakistan which has through a well-executed plan changed the demography of the region.

In 1970, the area was named as “Northern Areas”. The nadir was reached in 1974 when then prime minister Zulfiqar Ali Bhutto scrapped the Citizenship Act allowing outsiders to freely buy property and settle in the region. Terror camps were also established in the area much against the wishes of the locals.

Pakistan ever since continues to be the illegal occupier of Gilgit-Baltistan, exploiting its mineral and hydraulic wealth and denying the people the basic human and fundamental rights.

There are no legal institutions, no medical facilities and no professional colleges. The revenue generated from tourism and other assets in the area is not utilised for the development of the area /welfare of the local residents.

The Government of India made no effort to reach out the people of this area. Pakistan, on the other hand, played the religion card to its advantage by creating hatred against Hindus and India through the state-controlled media and school text books. India was portrayed as an enemy of Muslims and Islam and Pakistan as citadel of Islam.

The reality dawned on the people in 1988, when more than 100,000 Pakistani troopers and militants under the command of the then Brigadier Pervez Musharraf brutally attacked them and subjected them to rape, loot, arson and forced conversion. Musharraf was given the title of “Butcher of Shias”.

It compelled them to realise the actualities and have a re-think about their adopted country. They were also cautious of joining hands with POK, fearing Kashmiri domination. They continued to live like slaves and subjugated people. The area also became victim of terrorism.

To compound their miseries the footfall of Chinese soldiers and natives also increased manifold with the active collaboration of the Pakistani establishment. The Chinese investment in the area is illegal since the entire area is disputed.

In brazen contempt of international conventions, Pakistan has also illegally ceded part of the area to China. Senge Sering, a scholar-activist from the area, has expressed surprise that nobody in India talks about Gilgit- Baltistan and Chinese illegal investment there.

Pakistan uses the people of Gilgit-Baltistan as cannon fodder to achieve its politico-strategic interests in the region, particularly in Kashmir. In 1998, Musharraf once again was the architect of a meaningless Kargil War that not only led to the loss of about 4000 innocent natives but also to the displacement of hundreds of thousands people who till date remain internally displaced and economically deprived.

Pakistan continues to hold hostage the innocent people of the region for its economic and strategic reasons. The status of the area though disputed has been kept ambiguous by Pakistan. Through a sham ordinance in 2009 the area was re-designated as Gilgit-Baltistan and made a province of Pakistan with its own governor and chief minister but without representation in the parliament and senate of Pakistan.

A Gilgit-Baltistan Council headed by the Prime Minister of Pakistan was also formed as a supreme body. Gilgit-Baltistan Assembly has 24 elected and nine nominated members. It has an elected chief minister.

The arrangement has been termed by the natives as “colonial”. Thus, the subjugation, exploitation, discrimination and federal domination continues unabated on the hapless residents of the area.

The people want freedom from the oppressive Pakistani regime. They now look up to India and seek its support. India must provide moral, psychological and financial support to the natives of the area. After all they are our people living under illegal Pakistani occupation.

People to people contact and local trade should be encouraged through opening of trade routes across the LOC. India must object to Chinese investment and presence in the area. Whenever, Pakistan rants the ‘K issue’ it should be sternly reminded that Kashmir issue is not confined to the Sunni-dominated Valley, that comprises 11% of the geographical area of the state and is inhabited by only 22% of its total population, but also other areas and ethnic groups that form the majority in Jammu & Kashmir state, including Gilgit-Baltistan and POK. The State Subject Act should be restored and the people of Gilgit-Baltistan should have complete control over their land and resources.