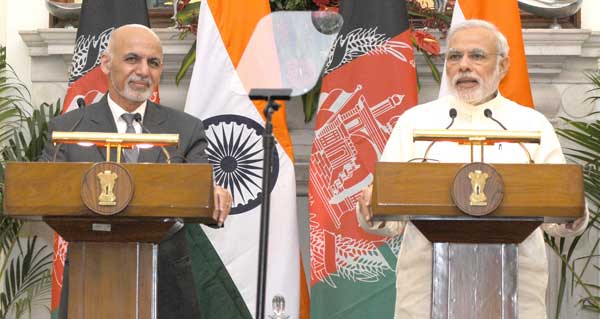 At the India Today Conclave 2015 on March 14, the evening theme was ‘The New Afghanistan – Endless War or a Fresh Start’. Dr Abddullah Abdullah, CEO of Afghanistan holding centre stage had to face a barrage of posers about the perceived tilt towards Pakistan by President Ashraf Ghani, reasons attributed were Ghani visiting India seven months after becoming President, his first foreign visits to China and in Pakistan going to the army headquarters to meet the Pakistani army chief overlooking protocol, sending Afghan military personnel to Pakistan for training, refusing military hardware from India planned by the previous Afghan government and the like. But then, isn’t Ashraf Ghani justified considering Afghanistan has to face the brunt of the Pakistani army and her proxies post the thin out of US-NATO?

Ghani’s dilemma is what will happen if all foreign troops are out and Afghanistan is left completely to the mercy of the ISI.  Isn’t this the reason, Afghanistan had to request President Obama to delay the pullout of US-NATO troops?

His predecessor, President Hamid Karzai in his 13 year’s Presidency made 20 trips to Pakistan hoping to find a solution. Karzai perhaps knew Pakistan, ISI’s terror nexus and its devious ways better having lived in Pakistan as Afghan refugee in early 1980’s and having operated with anti-Soviet Mujahedeen. Yet as President, he even once said that if US attacked Pakistan, Afghanistan will side with Pakistan. Yet there was no change in Pakistan’s policy of generating terror in Afghanistan that mirrors her continuing policy towards India. So, Ashraf Ghani decided to change tack. He handed over Xinjiang separatists languishing in Afghan prisons to China and visited China asking for Chinese help in bringing Taliban into the reconciliation process of Afghanistan, plus more Chinese investments and economic assistance.

In this connection, visit of an Afghan Taliban delegation to Beijing last September is significant. But it is yet to be seen how China can help in this with the US having failed to do so, albeit China has enormous finances at its disposal and has had links with both Taliban for past several years. President Ghani wooing Pakistan is no different from Prime Minister Vajpayee travelling all the way by bus to Lahore and more recently Prime Minister Narendra Modi sending the Foreign Secretary to Pakistan.

But what of the aftermath of President Ghani’s visit to Afghanistan? Immediately post this visit Maulana Fazal Rehman, Chief of Jamiat e Ulama Islam Pakistan, who is a member of National Assembly stated, “Afghan peace is linked to the presence of foreign forces in Afghanistan. Until foreigners withdraw Afghanistan, peace won’t restore to the Afghans motherland.” This was reiterated by ISI’s Public Relations Director General and linked the Afghan insurgency a cause of foreign forces presence in Afghanistan, while talking to Voice of America Deewa Radio [Pashto service]. Then was the interview of Sartaj Aziz, Advisor on Foreign Affairs to the Pakistani Prime Minister to BBC saying, “Pakistan should not engage in a war with those [insurgents/militants] whose target is not Pakistan.”

While the last statement clearly indicates Pakistan will continue to sponsor terrorism from its soil, the excuse used at least against Afghanistan will be the presence of foreign troops. Ghani’s dilemma is what will happen if all foreign troops are out and Afghanistan is left completely to the mercy of the ISI.  Isn’t this the reason, Afghanistan had to request President Obama to delay the pullout of US-NATO troops? In the same context, Ghani made strong plea during his recent trip to the US for long-term military cooperation between the US and Afghanistan.

There is clear understanding and mutual agreement between the two Taliban. Both will not lay down arms and shun violence, want all foreign troops out, do not believe in democracy and the Afghan Constitution and want the rule of Sharia.

Looking at the ground situation, violence is on the rise in Afghanistan. The fact that President Ghani had to delay his departure for India because of the Taliban attack at Kunduz indicates the shape of things to come. Taliban has already launched the summer offensive. Atiqullah Amarkhel, a Afghan military analyst in Kabul has predicted that “considering the influx of foreign fighters in Afghanistan, this fighting season will be the bloodiest fighting season.” There is clear understanding and mutual agreement between the two Taliban. Both will not lay down arms and shun violence, want all foreign troops out, do not believe in democracy and the Afghan Constitution and want the rule of Sharia.

Some of their factions have declared allegiance to the ISIS and the latter is establishing itself speedily in the Af-Pak border region. According to a recent report in the Washington Post, hundreds of foreign fighters are flowing into Afghanistan from Pakistan bolstering the Taliban and increasing the brutality and level of violence in the conflict.  Ahmad Nawid Froutan, a spokesman for the Badakhshan provincial governor, attributes the beheading of Afghan National Army soldiers in the province to foreign Pakistani fighters, but are these fighters not linked to the ISI and how are they different from the summer offensive of the Taliban which obviously has Pakistani support. They can hardly be classified non-state actors if they have been living in Pakistan for years and are sallying forth on purpose.

There have been other reports of Taliban having consolidated in the Badshah Khan Province quite well, ISIS cadres having been sighted along the Afghanistan-Turkmeininstn border, abduction of some 20 Hazaras by unknown radicals and now the village of Marchak in Afghanistan’s northern province of Baghdis habituated by Afghan Turkmen having been surrounded from three sides by the Taliban for past several months, fourth direction to the north being the Murghab River and the border with Turkmenistan, and that fighting between the Taliban and government troops already having entered the sixth day on April 21.

Nawaz Sharif as Prime Minister of Pakistan shook hands with Prime Minister Vajpayee when the latter travelled by bus to Lahore. He feigned ignorance of the Kargil intrusions which is highly doubtful. If he was unaware, he did not deserve to be the Prime Minister considering the scale of the operation. In all probability, he knew about the operation (as Musharraf contended) but either was for it or wouldn’t dare defy his military. He is again the Prime Minister of Pakistan today and as mentioned above, his Advisor on Foreign Affairs, Sartaj Aziz publicly says that Pakistan should not engage in a war with those terrorists whose target is not Pakistan. So, the ISI is free to launch its proxies against Afghanistan and India. That is why individuals like Hafeez Saeed and Lakhvi have the red carpet in Pakistan. In Ghani’s deck of cards Pakistan is the joker but the problem is that this joker has mostly played villain.

The irony of the situation is that Pakistan has successfully sold the “good” and “bad” Taliban theory to the US and has as successfully played the double game with both America and China – running with the hares and hunting with the hounds. The fact that despite continuously exporting terror and even proliferating nuclear technology, the US has gifted some US$ 50 billion since 1950 ( 70 percent in military aid) including the recent largesse of US$ 2 billion. And now is the US$ 47 billion China-Pakistan Economic Corridor, sale of 110 x JF 17 fighter aircraft from China and 8 x nuclear tipped missile firing Quing class conventional submarines at a cost of US$ 5 billion. Why should this not buoy the ISI to export terror more viciously?

As per a report in Pajhwok Afghan News dated 18 April 2015, the Afghan Governmemt is pessimistic about Pakistan’s lukewarm approach to restart the stalled peace process with the Taliban. Though the talks were expected to take place in March 2015, the National Security Council (NSC) has expressed grave concerns and resentment over Pakistan role for not being able to expedite the process. A source was quoted by the report to have said that Pakistan initially showed interest to bring Taliban to Kabul for peace parleys but Afghan government demanded that Islamabad should stop its support to the Taliban, which Pakistan is not ready to. President Ashraf Ghani had earlier stated that spring is a testing season for Pakistani claims; if there is increase in security incidents then it is an ample proof that Pakistani claims are not genuine. Well that proof has already arrived with the Taliban’s spring offensive in full sway.

India has been looking for a land link to Afghanistan and CAR through Pakistan over several decades, but latter has chosen to block it and is unlikely to change its stance.

The above developments are hardly surprising and it does not affect the India Afghanistan Strategic Partnership Agreement of 2011 in any way, which spans political and security cooperation, trade and economic cooperation, capacity development and education, and social, cultural, civil society and people-to-people relations formulated on the bedrock of the ancient links, friendship and common civilization goals. Foreign Minister Sushma Swaraj recently reiterated that “India is committed to assisting Afghanistan in its quest to become an independent, peaceful and prosperous country”. India has a shared interest in the success of an Afghan-led and Afghan-owned process of reconciliation.

Prime Minister Modi said “this should be conducted within the framework of the Constitution of Afghanistan, without the shadow of violence.  It should reinforce the political, economic and social progress of the last fourteen years. And, it should protect the rights and aspirations of all sections of the society, including Afghan women.” But then Mr Modi also added that the success of this process requires a positive and constructive approach from neighbours, including an end to support for violence. The question here is will Pakistan play ball. Present indications do not indicate such possibility. Therefore, very rightly India is fast-tracking development of the Chabahar route that will allow access to Afghanistan as well as Central Asia, also permitting tapping of energy resources.

India has been looking for a land link to Afghanistan and CAR through Pakistan over several decades, but latter has chosen to block it and is unlikely to change its stance. China too despite her tremendous influence over Pakistan does not appear to be conducive to such prospect. To this end, India’s willingness to join the successor agreement to Afghan-Pakistan Trade and Transit Agreement also appears utopian for even if such impossibility happens, any Afghan goods coming by road to India will have to pass through the highly volatile regions of Pakistan controlled by ISI proxies. Therefore, their arriving at the Attari border, if at all, without incident or without paying enormous transit safety money to Pakistani proxies is highly questionable. With reference to terrorism, President Ghani re-emphasized on his visit to India what India has been saying, in that; terrorism should not be classified into “good” and “bad”. So we are back to how the joker acts in Ghani’s deck of cards.

4 thoughts on “Ghani’s Deck of Cards – joker is Pakistan”