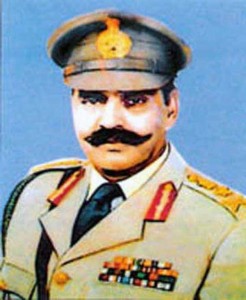 After he took over as the Army Chief in June 1978, as a proud Gunner, General O P Malhotra’s first visit was quite naturally to Devlali – the home of the Gunners. On the evening of his arrival, the Gunners Amateur Dramatics Society (GADS) put up a variety show comprising a couple of short plays and dances.

I was then a young Captain and had been posted as an Instructor-in-Gunnery (IG) at the Field Wing, School of Artillery, only a few weeks ago. It was a privilege to have been asked to compere the show.

When the General and his wife came on stage to compliment the participants, the General asked for the microphone. He was very appreciative of the show and thanked us for the effort put in. He said that almost 40 years ago, as a young captain in Devlali, he was a member of GADS and used to compere such shows. He then said he had no hesitation in admitting that the evening’s compere had done far better than he had ever done. He called me forward, asked for a special round of applause for the compere and gave me a warm hug.

During dinner that evening, he walked up to the corner where we youngsters were standing and regaled us with tales of his younger days in Devlali.

The next morning he visited the School of Artillery. My task was to brief the Chief about innovation in training aids and I was given a newly assembled ‘innovative’ training aid to introduce to him. He listened quite attentively and asked a number of questions, but none of them were about training aids.

He asked me about myself and my family. Which regiment are you from? Where have you served? How well have you done on your training courses? In which school did you study? What does your father do? How many brothers and sisters do you have?  It sounded as if a prospective groom was being interviewed!

A short while after he went away, his Liaison Officer came and said, “Congratulations! The Chief wants you as his ADC.” I was torn between the honour of serving with an Army Chief and making the most of the professional opportunity given to me as an IG in the Field Wing at the School of Artillery. I had said no to an ADC’s job to an Army Commander and to a GOC before coming to Devlali.

I met Brig (later Lt Gen) T P Singh, Commander, Field Wing, and told him that while it would be an honour to go to Delhi, I’d much rather stay on at Devlali as an IG and consolidating my learning. I requested him to convince the Chief. To his great credit and my everlasting gratitude, General Malhotra very gracefully conceded that I must not be denied the opportunity to learn the art and science of gunnery and that he would find another ADC.

General O P Malhotra – army chief, ambassador, governor – passed away recently. Besides his outstanding achievements as a COAS, his contribution to AGIF, AWHO and in the establishment of Army Public Schools shows his visionary approach as an administrator.

Farewell, General. May there be many more like you. Rest in peace.