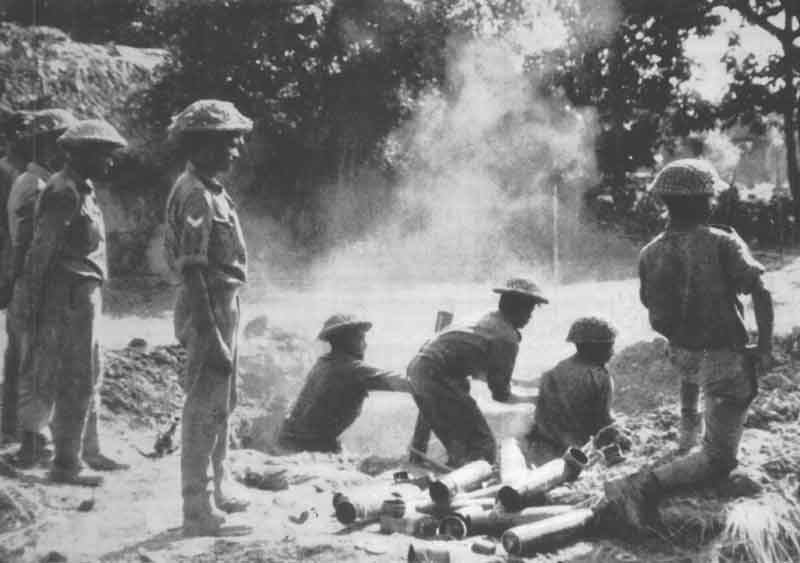 The lightning campaign launched by the Indian Army in Dec 1971 which resulted in the birth of a new nation — Bangladesh, is surely the greatest feat of arms in our history. As happens in any war, many issue become controversial with differing perceptions and opinions. 1971 war was no exception. It has its fairs share of issues which have retained their mystery over the years. With most of the participants dead, these mysteries will perhaps continue to remain so.

In his book Surrender at Dacca —Birth of a Nation Gen Jacob claims that in April ’71 Sam rang him up and said Eastern Command needs to march into East Pakistan immediately which Gen Jacob refused to do.

Did Sam actually tell Mrs. Gandhi what he claimed?

Sam is universally credited for withstanding pressure from Mrs. Gandhi and her cabinet colleagues to March into Bangladesh in April ’71 itself. In an interview to Quarter Deck, a publication of The Ex servicemen’s Affairs Cell of the Indian Navy in 1996. Sam recounts verbatim, what transpired at the Cabinet Meeting. Gen Jacob, who was Chief of Staff, Eastern Command in 71′ puts it differently. In his book Surrender at Dacca —Birth of a Nation he claims that in April ’71 Sam rang him up and said Eastern Command needs to march into East Pakistan immediately which Gen Jacob refused to do. Gen Jacob, however gives credit to Sam for standing up to Mrs. Gandhi and not marching into East Pakistan in April ’71.

Impression conveyed is that Sam was initially keen to march into East Pakistan in April as directed by the Govt. but later was apprised by Gen Jacob of the disastrous consequences such an action will have and then changed his stance in the famous cabinet meeting. Gen Jacob also claims that knowing Mrs. Gandhi, nobody dares to talk to her in the manner Sam describes in his interview to Quarter Deck. As to why Sam would by-pass the chain of command and tell Gen Jacob, who was Chief of Staff that Eastern Command should march into East Pakistan and not speak to Lt. Gen Jaggi Aurora, the Army Commander is a little farfetched.

Was Dacca the terminal objective at any stage of the War?

Gen Jacob, in his book claims that he always maintained that Dacca, being the geo political and geo strategic heart of East Pakistan must be the terminal objective of the Indian offensive while Sam felt that by capturing the entry ports of Chittagong and Khulna, Dacca would automatically fall. Army HQ Operation instruction for ’71 war in the East issued in Aug ’71 did not mentioned Dacca as the terminal objective. In this context what late Lt. Gen Inder Gill, then DMO, has to say may be relevant.

Did Mrs. Gandhi really tell BSF to march into East Pakistan in April ’71 after Army indicated its unwillingness to do so?

Operational Instructions issued to Eastern Command specified capture of areas up to main river lines. Dacca was not included as the terminal objective. This was because it was considered at the time planning was done that Eastern Command would not have the capability of capturing the whole of East Pakistan before a ceasefire was forced on us. It is the great credit of Indian Army leadership that once Pakistani defences started crumbling, they were able to quickly switch gears and head for Dacca with dash and élan. Did Mrs. Gandhi really tell BSF to march into East Pakistan in April ’71 after Army indicated its unwillingness to do so?

Gen Jacob, in his book “Surrender at Dacca” recounts an interesting tale. According to him, sometimes in April ’71 Mr. K. Rustomji, then Director General Border Security Force (BSF) came to meet him. Mr. Rustomji told Gen Jacob that since Army was reluctant to move into East Pakistan, govt had ordered BSF to do it. Mr. Rustomji said he would be able to do it in two to three weeks and wanted Gen Jacob to keep an Army contingent ready for the victory parade. This sounds most incredulous. In the event BSF’s plans of a victorious march into East Pakistan were doomed to failure. Since apart from Gen Jacob, all other participants are not longer alive, it shall remain a mystery.

Why was Northern Axis from Shilling to Dacca not exploited?

As would be seen from the map, the shortest axis to Dacca is the Northern Axis from Shillong to Dacca. The biggest advantage of this axis is the fact that no river crossing was involved while in all the other three axes a major river crossing was involved. It is indeed a mystery that allocation of forces to the Northern Axis was just HQ 101 Communication Zone Area with one brigade. In the event they had the last laugh since they were the first to reach Dacca.

It appears rather farfetched that Army Chief can be kept in dark about move of three brigades.

The Govt. permits the Army Chief to move a certain number of Divisions from one theatre to another in a war situation without reference to the Govt. Gen Jacob in his book “Surrender at Dacca” has mentioned that between him and Maj Gen (later Lt. Gen) Inder Gill, the DMO, they ordered move of three brigades from the Chinese front without even informing Sam. It appears rather farfetched that Army Chief can be kept in dark about move of three brigades. The only other person who could verify this was late Lt. Gen Inder Gill who is no more. So this intriguing aspect would also remain a mystery forever.

Did Sam really decline to be part of Indian delegation to Shimla?

A story does the round from time to time that Mrs. Gandhi wanted Sam to be a part of India delegation for Shimla conference in June 1972. Sam felt that an Army Chief was too high an appointment for such a delegation. He accordingly earmarked a Lt Col from Military Operations Directorate as a member of delegation which was turned down by the Govt. It is a matter of conjecture whether deliberations at would have taken a different turn had Sam been a part of the delegation. One thing is sure. He would not have agreed to return all captured territory and all prisoners without getting something substantial in return — perhaps solutions of J & K problem. Alas we would never know.

Why was the line of Control not delineated North of Pt NJ 9842 after ’71 War?

The 1949 Karachi Agreement between Indian and Pakistan mentioned the delineation of the Ceasefire Line upto map reference NJ 9842. Thereafter the Ceasefire line was to run Northward to Glaciers. This was vague enough but was accepted by both India and Pakistan because no one could visualize any armed conflict in this high attitude wilderness. However, not to mention specifically the alignment of Ceasefire Line / Line of Control right till the India — Tiber border is an act of omission which has cost us dear.

Pakistan launched cartographic warfare after ’71 war and showed the line of control joining Point NJ 9842 to Karakoram Pass. Soon many world Atlases started showing this line on their maps. We had not shown any line on our maps and it is only after our occupation of Siachen Glacier that we stared showing a line from Point NJ 9842 to Indra Col and calling it the Actual Ground Position Line (AGPL) to distinguish it from the Line of Control (LC).

Since all dramatis personae are no longer alive, the reason for this costly mistake will forever remain wrapped in mystery. And finally the biggest mystery of all why did Gen Jaggi Aurora, the Eastern Army Commander abdicate his operational responsibility and allow Gen Jacob, his Chief of Staff to not only plan but also conduct operations in East Pakistan?