Dealing with the US always tests our diplomacy 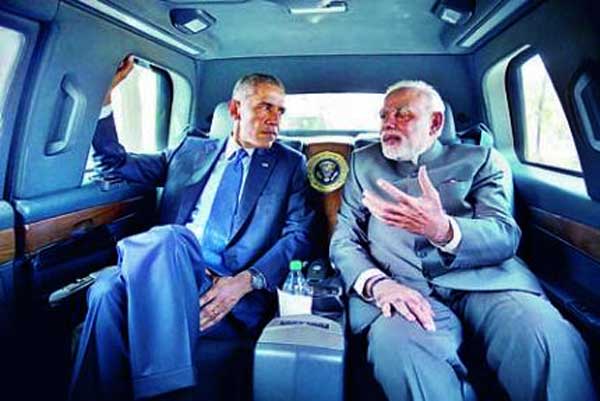 Prime Minister Narendra Modi’s US visit presented him with a difficult challenge. At the rhetorical level, projecting the India-US relationship as between two democracies is easy. The US calls its relationship with India a defining one in the 21st century, though actual US policies belie such rhetoric. Our hype about the US being our ‘natural partner’ is not justified by the record of our relations with it since Independence. And so, the general perception continues to be that the rhetoric is disconnected from reality.

Will the US develop industrial corridors like Japan or competitively build highways, ports and airports? India has “offered” US industry lead partnership in developing three Smart Cities…

America’s grouse is that India has not adequately requited Washington’s decision to lift nuclear sanctions on it. American nuclear firms expect to get business in India and want the Indian nuclear liability law amended. They eye a big share of the Indian Defence procurement pie as another reward. On the economic side, US corporations have launched a campaign against India’s intellectual property, trade and investment policies, especially in the pharmaceutical sector. On WTO issues, the US government turns differences at a multilateral forum into bilateral pressure points against India. Modi and US President Barack Obama have not announced any closing of differences on these issues. In the joint press briefing, Modi simply said that he “believes” that with the change in Indian policies and processes, the India-US economic partnership will grow rapidly. On IT-related issues, Modi said he sought Obama’s support “for continued openness and ease of access for Indian services companies in the US market”, without in
dicating the latter’s response. On the “candid discussion” on the WTO stand-off, he maintained that while India supports trade facilitation, he expected a solution “that takes care of our concern on food security”.

The joint statement was not more elucidative. Both sides, it says, “will facilitate” actions to increase trade five-fold, unachievable in any realistic time-frame. They “pledged” to establish an Indo-US Investment Initiative and an Infrastructure Collaboration Platform to develop and finance infrastructure. Will the US develop industrial corridors like Japan or competitively build highways, ports and airports? India has “offered” US industry lead partnership in developing three Smart Cities, while offering similar cooperation to Japan, Singapore and even China in this area.

On the WTO stand-off, the officials were “directed to consult urgently” on the next steps. The two leaders “committed to work” through the Trade Policy Forum to promote an “attractive” business environment (how and what are the metrics?) and to establish an annual high-level Intellectual Property (IP) Working Group with appropriate decision-making and technical-level meetings (will this bridge real differences, when the US is too demanding and India insists that our policies are TRIPS-compliant?). They “reaffirmed their commitment to “implement fully the US-India civil nuclear cooperation agreement” and establish a Contact Group to advance this (will we revise the liability law?). They “stated their intention” to expand Defence cooperation to bolster national, regional, and global security. It’s unrealistic when, even in the case of “regional security”, the US-Pakistan military ties and its talks with the Taliban stick in our craw. While deciding to renew for 10 more years the 2005 Framework for US-India Defe
nce Relations, they directed their Defence teams “to develop plans” for more ambitious programmes.

…but one sees little US pressure on Pakistan to curb Hafiz Saeed or flush out al-Qaeda’s Ayman al Zawahiri.

The mere mention of IS in the joint statement is being applauded by some as a decisive step by India to shed its non-aligned inhibitions and assume international responsibility. They forget that Modi did not mention IS in his speech at the UN – where, in fact, he expressed reservations about the combat against terror not being inclusive — or in his speech at the Council on Foreign Relations. The stress on the need for joint efforts to dismantle safe havens for terrorist and criminal networks, to disrupt all financial and tactical support for networks such as al-Qaeda, Lashkar-e-Toiba, Jaish-e-Mohammed, the D-Company and the Haqqanis is welcome, but one sees little US pressure on Pakistan to curb Hafiz Saeed or flush out al-Qaeda’s Ayman al Zawahiri. The omission of the Taliban from the list is striking.

India should not act irresponsibly about its own interests to prove to the US that it is a responsible power.

Obama notably affirmed that India meets Missile Technology Control Regime requirements and is ready for membership in the Nuclear Suppliers’ Group and supported India’s early application and eventual membership in all four regimes, without setting any time-table. He merely repeated the formulation he used in 2010 on India’s permanent membership of the UN Security Council.

On Asia-Pacific, the joint statement shows a more substantial convergence of interests. The joint commitment to work more closely with other Asia-Pacific countries, including through joint exercises, points towards Japan and potentially Australia. The concern expressed about rising tensions over maritime territorial disputes, and affirmation of the importance of safeguarding maritime security and ensuring freedom of navigation and overflight throughout the region, especially in the South China Sea, are significant in the context of China’s disruptive policies in this area. The trilateral dialogue with Japan and the decision to consider raising it to Foreign Ministers’ level assumes significance. Also significant is the stated intent to consider enhanced technology cooperation for the Indian Navy.

Overall, though, Modi’s visit to the US has been a huge publicity success, both for him and for India. Modi conducted himself with confidence, projecting in the process a new and confident India. He spoke to Obama as an equal and did not feel compelled to earn the latter’s goodwill by yielding on essentials. At the end of the day, India and the US have to find common ground that protects their respective interests. The US as a global power should not force India to support it in its geopolitical mistakes. India should not act irresponsibly about its own interests to prove to the US that it is a responsible power. Dealing with the US will always test our diplomacy.