Countering Future 'Pathankots' on the Ground

The author is a retired Army officer. 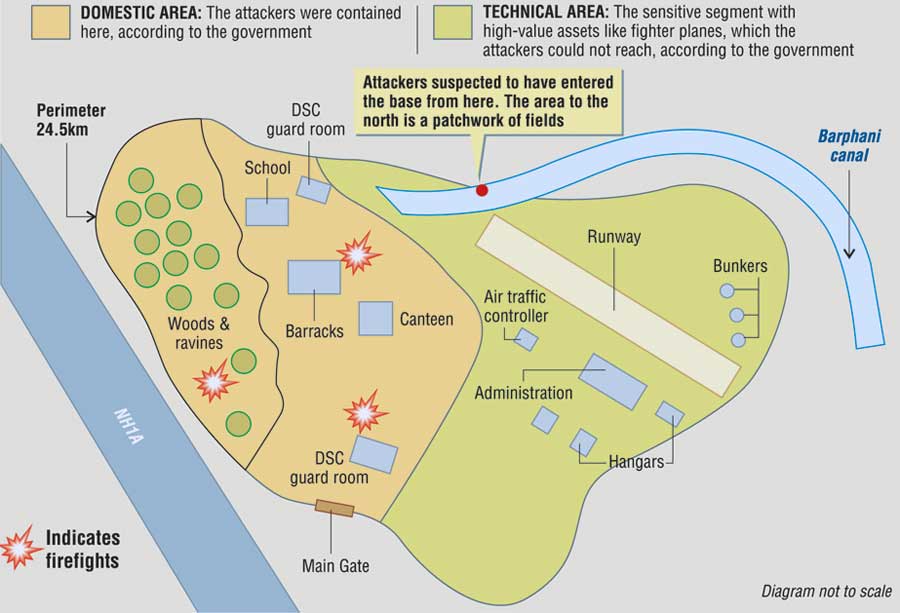 ‘Pathankot’ has now become a synonym for the hybrid warfare unleashed by our adversary. A great deal has been written about the incident and even more debated on electronic media. While post mortems by participants and planners will doubtless lead to important outcomes affecting the entire canvas of such operations, the requirement to have a fresh look at our concept of garrison security once again emerges as a recurring narrative.

India has over 60 cantonments and a large number of military stations. Since cantonments being akin to municipalities house a large numbers of civilians, they are totally open to the public, providing access to roads that pass by military offices, training areas, installations and residential accommodation. In large cantonments, link roads and even highways cut through the centre, bringing in heavy load carrying vehicles, with commercial shops abutting unit locations. Military stations are more secure with few civilians residing inside, restricted civilian traffic and perimeter security provided by barbed wire fencing, brick masonry or a combination of both. However, these stations too have been victims of terrorist strikes with the last major one being on an armoured regiment in the Pathankot / Mamun area.

The challenges before the local garrison commander in this regard are manifold. Ideally, he needs to be privy to timely intelligence about such attacks, something not always possible. He must then ensure speedy and effective reaction (in case it falls within the civilian areas of the cantonment, then after coordination with other agencies) with the appropriate mix of force to ensure that such an attack is either foiled or results in elimination of the adversary with minimum loss of life (civil and military) and material damage to oneself. He has to be equally prepared to ward off the stray ‘lone wolf’ attack which may occur without warning. Also, and most difficult of all since the threat is hybrid, he has to look beyond the use of just physical force by the terrorists and ready himself accordingly.

The immediate reaction after any such attack is to review existing station security schemes. This would then be followed by renewed demands for construction / extension of boundary walls and fencing in sensitive areas, tightened checks for entry and exit, heightened patrolling, more frequent rehearsals, improving communication, coordination with the civil police and such like measures. In addition, training in field-craft and skill-at-arms would receive greater emphasis. During all this however, commanders need to reconcile the likely dichotomy that might well arise wherein troops are asked to exercise due caution and vigilance at all times even though located in their own heartland, when their operational role instead mandates displays of boldness, offensive spirit and the highest levels of initiative for achieving success in battle. A corollary to all of the above is that with frequent turnover of units in a station, handing/taking over of such duties has assumed greater importance as compared to yesteryears and cannot be given lip service to. Finally, another fallout of the continued focus on such tasks in a peace station is the inevitable toll that it takes on the quality of life of a soldier, who has arrived here after a gruelling stint in a difficult field area and looks towards spending time with his near and dear ones.

Conceptually, the requirement boils down to upgrading our security infrastructure so that it can match up to the current (hybrid) threat perception. Modernising our security mechanisms is inevitably a function of the funds available and it is here that station commanders have a role by ruthlessly slashing down on cosmetics. Certain steps such as establishing a station surveillance grid (wherein surveillance cameras covering important approaches such as tracks, junctions, sensitive installations and so on can be networked onto a station surveillance cell which could be manned 24/7 on the lines of the Military Police Desk Room, with optional linkages to the police surveillance network), or fitting important station duty vehicles with GPSs, improving radio communication with the police with issue of additional radio sets, executing works such as electronic barriers for physical prevention of movement, energising the MES and state water and electricity departments to ensure uninterrupted and contamination free supply of such services, and training specialist medical and engineer teams for central positioning are some of the mandatory steps which have to be taken forthwith by respective agencies. Equally important is the staffing and where necessary, internal reorganisation of Sub Area and Area HQs, so that there is a core element at all times to shoulder this enhanced role.

An issue worth examining is the allotment of dedicated troops drawn from one single unit to deal with such contingencies, instead of the current practice of having a sector wise distribution within the station wherein each unit contributes a certain percentage of its strength for such duties on as required basis. It is worth considering whether a single unit can be allocated such an internal security task as its operational role, so that it remains focussed on the same on a 24/7 basis.

Such a unit would be shown on a field/CI profile despite its location in a peace station. It would not be available for routine peace time tasks, or the conventional operational role of the formation ab initio, except possibly for providing some strength as escorts for various logistic columns when hostilities commence. Such a unit would naturally build up greater expertise and institutional knowledge to deal more effectively with such situation than what is feasible now.

Combating hybrid warfare is a full time task, more so when the enemy is known to look for soft targets. To ensure that we are never surprised, there is no option but to get more proactive and look for newer and more efficient mechanisms to subdue this threat. It is time that the priority given for the security of our peacetime garrisons is upgraded. While funds will always remain a constraint, available in-house measures coupled with innovative thinking must be exploited in full to rework the current paradigm.