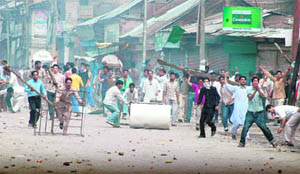 Islamabad is treating areas of Kashmir illegally occupied by them as a colony. Pakistan has not developed infrastructure in the area with an ulterior motive and the residents continue to lead their lives without the basic privileges the modern world of today can afford. There are no highways, no good roads, less educational institutions and age-old medical facilities.

These massive protests were not sporadic, but they were the result of colossal repression by security forces.

The areas of Kashmir illegitimately taken from India consist of POK, Gilgit-Baltistan and territories given to China. Domestic or international press is not free to cover Pakistan Occupied areas of Kashmir, hence world does not so much know about the pitiable and underdeveloped condition of the masses. But sometime back the residents of POK revolted against Islamabad.

These massive protests were not sporadic, but they were the result of colossal repression by security forces. The demonstrators shouted anti-Pakistan and pro-India slogans. They stated that Pakistan has no right to occupy the areas of Kashmir as legally they are part of India and that Kashmiris in India are enjoying much better amenities and democratic rights than Pakistan. They also desired to be a part of India.

The sinister ISI which helps separatists in J&K is worried as their influence is diminishing and people want peace.

Pakistani media which often write concocted stories about the human rights violations by Indian security forces in J&K were not allowed to cover these demonstrations and press has not given any publicity to the violent suppression by security forces.

Islamabad’s concern about the alleged human rights violations in J&K by Indian security forces and using brutal force in Kashmir under their illegitimate control indicates the double standards of Pakistan.

The sinister Inter Services Intelligence (ISI) which helps separatists in J&K is worried as their influence is diminishing and people want peace. The Pakistani High Commissioner in New Delhi gives importance to the leaders of All Parties Hurriyat Conference (APHC) despite it having lost credibility and popular support so that the separatist movement continues in the valley.

Pakistani Prime Minister Nawaz Sharif extended an invitation on October 10 to Syed Ali Shah Geelani Chairman of APHC to visit Pakistan. Geelani who always condemns Indian security forces had not uttered a word against oppression of Pakistani forces in POK instead while accepting the invitation, thanking Pakistan for helping Kashmiris instead.

The residents of POK pointed out that creation of Bangladesh is a proof of failure of the two nation theory; India has more Muslim population than Pakistan and that they have more rights than Shias do in Pakistan. They mention that Punjabis are exploiting all other nationalities in the country and their condition is worse than what it was under the British rule.

The Indians who visited POK mentioned that the residents are disillusioned from Islamabad and are impressed by the help rendered by Modi government during recent flood in J&K. They are also disheartened by growing extremism in Pakistan and appreciate democracy, rule of law and communal harmony in India.

Sunni dominated Pakistan is settling Sunnis from other provinces in Shia areas to change the demography of the region.

Pakistani authorities conducted phony elections for 24 out of 33 seats in Gilgit and Baltistan Legislative Assembly on June 8. The authorities have imposed section 144 and put several restrictions before and after elections in the region. Several Shias of the area revealed that they were not allowed to cast votes and ballot boxes were stuffed by bogus ballot papers.

Government of India made a protest on the conduct of election as it is an integral part of India, but Pakistan rejected the protest mentioning it as an intrusion in their domestic affairs.

Several parts of Pakistan controlled areas in Kashmir are Shia majority areas. Sunni dominated Pakistan is settling Sunnis from other provinces in Shia areas to change the demography of the region.

China and Islamabad would exploit the mineral resources of the region and the benefits would go to them and the region would remain under developed. China besides minerals would also exploit water resources of the area. They cite the example of mineral rich Baluchistan which is the poorest province of the country.

India which has the second largest Muslim population in the world must try to check the unwarranted growth of Islamic extremism in the region as it would be dangerous for the communal harmony of the country.

Ministry of External Affairs and Indian diplomatic missions abroad must launch a full scale campaign against the carnage and atrocities committed by Pakistani forces in the areas of Kashmir illegally captured by them. First of all it will mitigate Pakistani false propaganda against Indian security forces and secondly it will also get Pakistan on defensive.

Indian Foreign Secretary should summon Pakistani High Commissioner in India and should convey strongly that the residents of Pakistan Occupied Kashmir have revolted against the suppression hence Pakistani government must take remedial measures as they all are Indian citizens.

The area which is adjacent to Xinjiang Autonomous Region is facing Islamic onslaught is strategically important. China which is helping various separatist outfits in India especially in North East can be reciprocated.

India which has the second largest Muslim population in the world must try to check the unwarranted growth of Islamic extremism in the region as it would be dangerous for the communal harmony of the country.

Government of India should assist the residents of POK who are legally Indian citizens and want to merge in India so that they are liberated from the draconian rule of Islamabad.  India should not forget that in the past India had not assisted Khan Abdul Gaffar Khan and his party, and now ISI maintains training camps in Khyber Pakhtunkhwa.

India must give a strong message to Pakistan that several nationalities including Balooch, Pathans, Sindhis, Muhajiris etc are not only demanding more autonomy they want to secede from Pakistan. The terrorism and extremism has increased manifold in the country and the economy is in shambles hence instead of abetting terrorism in India Pakistan should keep its house in order.