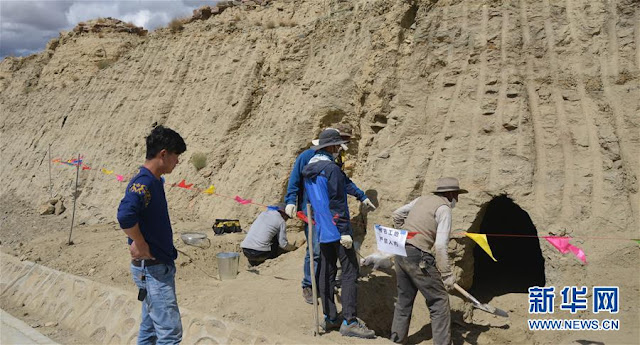 China has lately become very fond of archaeology though it is mainly a ‘political’ archaeology. On December 1, Xinhua published an article titled: ‘Qinghai-Tibet Plateau first conquered by humans at least 30,000 years ago.’ Does this mean that China conquered Tibet much earlier than thought? History books tell us that the People’s Liberation Army (PLA) entered Eastern Tibet on October 7, 1950.

The news agency explained the earlier ‘occupation’: “Thousands of stone artifacts recovered from a paleolithic site in the Tibet Autonomous Region (TAR) in southwest China indicate that humans might have conquered one of the highest and most ecologically-challenging places on the globe.”

A total of 3,683 stone artifacts have been discovered from the 30,000-40,000-year-old site, including blades, flakes, chunks and tools, the last of which range from scrapers, awls, choppers, notches and burins. Though the environment then was much warmer and more humid, Gao, a researcher from the Institute of Vertebrate Paleontology and Paleoanthropology, Chinese Academy of Sciences (CAS), admitted that humans did not settle down permanently on the plateau at that time.

Xinhua concluded: “Most agree that the discovery enormously prolonged human history on the Qinghai-Tibet Plateau with indisputable archaeological evidence.”

Another article in Science mentioned a location where the CAS team found pieces of stone artifacts, pottery shards as well as animal bones. It was in a village in Nyingchi in the TAR. What is interesting (and worrying) is that these researches come close to the disputed Indian border. The same phenomenon is happening elsewhere on the Indo-Tibet border. For example, in Ngari Prefecture of Western Tibet. China is probably trying to establish its political bonafide in the region.

Last month, Xinhua reported: “Chinese archaeologists have excavated more than 20 tombs thought to be around 2,000-year-old in southwest China’s TAR”. The conclusion was: “ancient tombs provide clues to mysterious civilisation in Tibet.”

The idea is to prove that Tibet has not always been Buddhist (which is true), sidelining the importance of the religious Buddhist hierarchy, particularly the Dalai Lama.  In early July, a project was launched by Sichuan University — Huo Wei, head of the School of History and Culture of the university announced that “more than 70 artifacts have been found in these tombs in Peyang Tunggar [Dungkar] ruins [near Tholing, the capital of the former Guge Kingdom], including bronze mirrors, fabric, pottery, and accessories. We found millet in a pottery cup and tea in a wooden box, which are believed to date back between the Han Dynasty and Jin Dynasty.”

Huo explained: “The discoveries showed that there was a long stage of civilisation in the Peyang Tunggar region, and the civilisation had close ties with the surrounding areas. Before Buddhism was introduced to Tibet in the seventh century, there was a period called Shangshung culture according to historical recordings.”

Why is it important for India? It appears that Beijing is going to duplicate in Ngari what it did in Nyingchi area and the excavations give China a political legitimacy — it is the first theoretical step, the road infrastructure leading to the border and a string of model villages are the next practical stages.

Moreover, three new airports will soon be constructed in these frontier areas — Lhuntse (in Lhoka prefecture, north of Arunachal), Tingri (in Shigatse City, close to the Nepal border) and Purang — which is located at the tri-junction with Nepal and India on way to the Kailash-Manasarowar yatra in Ngari prefecture. But that is not all.

A few days ago, China Tibet News reported that the TAR’s Preserving Institution of Cultural Relics had completed some archaeological work on Relics of the Qing (Manchu) Dynasty at Yatung in the Chumbi Valley, near Sikkim, an area which witnessed the Doklam incident last year.

The so-called occupation of the Chumbi Valley by the Manchus is a new way to rewrite history and show that these areas close to the Indian border have always belonged to China …and are part of the Silk Road, dear to Chinese President Xi Jinping.

The website speaks of “an irreplaceable section of South Asian corridor on the Silk Road, Yatung Custom Relics has been recognised as the witness of the Central Government’s [Beijing] valid ruling over Tibet and China’s claim on sovereignty.”

‘Valid’ ruling is a new term, at a time when nobody disputes China’s occupation of Tibet any longer. The TAR ordered the ‘repairing-for-salvage work’ of the relics and the TAR Cultural Relics Bureau set up a joint expert group and conducted a field research, “during which six buildings and roads linking the buildings have been discovered.”

The press release mentioned: “The whole relics were filled with collapse piles, and a large number of porcelains, iron and bronzes were unearthed, too. Analysis on layout, scale and interior structure of these buildings has preliminarily shown that they have been used as working offices, dormitories for workers and garrison, the Temple of Guan Yu, customs clearance place, as well as daily goods trading center.”

Did the Manchus ever occupy the Chumbi Valley? Nobody has heard of this before. China now wants to preserve the ‘evidence’ and conserve the relics. The Yatung County’s Communist Party committee and the Yatung County Government jointly formulated an Emergency Protective Repair Plan with working priorities for the preservation.

Chinese ‘experts’ affirmed that the Yatung Custom Relics “carries a lot of historical memory. Preserving the relics has significant practical and historical significance to study border culture, develop patriotism, carry forward fine traditions, safeguard national unity, as well as develop local tourism and economy.” A good preparation to bring millions of tourists (soon by train) to India’s border! But there is another angle omitted by Xinhua and its other associate websites.

India had a beautiful Trade Agency in Yatung. The building belonged to the Government of India. It was visited by the Prime Minister of India in September 1958. It was destroyed by the Chinese PLA after the 1962 war. Did not the Yatung Relics Committee look for the vestige of Indian presence in Tibet? Their approach then seems rather selective!  The Yatung Relics Department should be asked to excavate the area and open it to pilgrims, passing through the Chumbi Valley on their way to the Kailash Yatra. But perhaps the Wuhan consensus does not allow such requests. Rules of engagement should be fair.

This article Archaeology and politics appeared in the Edit Page of The Pioneer.