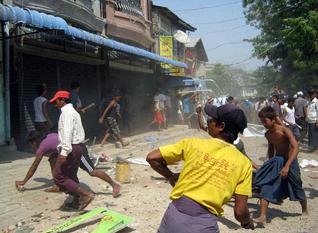 Anti-Muslim rumours projecting Muslims negatively have spread to Rangoon from Meikhtila which has been placed under a State of Emergency following three days of Buddhist-Muslim clashes last week.

There have been reports of fear among the Muslima of Rangoon, many of them of Indian origin, following circulation of rumours regarding possible attacks on Muslims and their properties there. The Myanmar Government has placed security forces in Rangoon in a state of alert. There have been no violent incidents so far.

Muslims suspect that the attacks on Muslims and the rumours are being instigated by anti-reform elements in the Army to discredit President TheinSein and Aung San SuuKyi.

Muslims suspect that the attacks on Muslims and the rumours are being instigated by anti-reform elements in the Army to discredit President TheinSein and Aung San SuuKyi.

The privately-owned Irrawaddy Journal has reported as follows:  “ Fear gripped Rangoon’s Muslim communities on Sunday night after reports and rumors began to emerge that groups of rioters were planning to attack their neighborhoods. Muslim residents reacted by closing shops and holding nighttime patrols, but eventually there were few incidents in Burma’s biggest city.

“Over the weekend the violence directed at Islamic communities spread southward through Mandalay Division from Meikhtila Township, where 8,000 Muslims were displaced and dozens of people were killed after violence erupted last Wednesday.

“Some Islamic leaders and Burmese activists now allege that the rapidly spreading communal violence—which appears to pit Buddhists against Muslims—is in fact being incited by outside interests.

“On Sunday night, reports and rumors that groups of anti-Muslim rioters were on their way to Muslim neighborhoods in central Rangoon first began to appear. Around midnight an unidentified group allegedly tried to set fire to buildings in Ma U Gone, a Muslim quarter in Tamwe Township, according to local resident Tha Aye.

Some Muslim leaders believed that the violence directed at their communities was being orchestrated by outsiders. “In my opinion, a group of people is trying to instigate public unrest by targeting Muslim people,” said Aye Lwin – a Muslim representative from Burma’s Interfaith Friendship Organization.

“It was near midnight, around seven or eight people came in a van and tried to set buildings on fire. When people tried to catch them they ran away,” said Tha Aye, who is also chairman of the Union National Development Party, an Islamic political organization.

“They threw [Molotov cocktails] at a mosque but it was in vain,” he said, adding that the attackers revisited the area more than one hour later, but they were chased away by residents who carried knives and sticks.

‘News of the incident quickly reached other Islamic communities who formed vigilante groups to patrol the streets, according to Aye Lwin, a Muslim representative from Burma’s Interfaith Friendship Organization.

‘At around 3 am Monday morning Muslim crowds could be heard chanting ‘God is Great’ as they marched through central Rangoon’s Pabedan Township.

‘Residents of MingalarTaungNyunt Township, a predominantly Muslim market area, were also on alert after they received repeated anonymous phone calls on Sunday night, saying that the area would be the target of mobs.

‘Businesses in the area remained closed during a visit by a reporter on Monday. “We want the government to help stop these rumors and reassure the community’s safety,” local community leader KhinHlaing said.

‘Some Muslim leaders believed that the violence directed at their communities was being orchestrated by outsiders. “In my opinion, a group of people is trying to instigate public unrest by targeting Muslim people,” Aye Lwin said.

‘”Tha Aye alleged that elements in the ruling Union Solidarity and Development Party were involved in the supposed organization of the anti-Muslim riots, adding that they wanted to hinder President TheinSein’s political and socio-economic reform agenda.”

Our security agencies should step up online monitoring to prevent dissemination of morphed images of the violence by extremist elements as happened last year after the violent incidents in the Rakhine State.