A Soldier with Two Wives 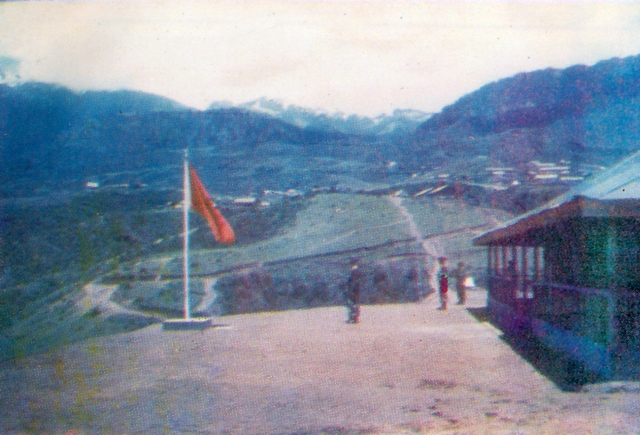 Lakshman Singh, a slim young captain had two wives when, in May 1962, he was told to join the ill-fated 7 Infantry Brigade on the Namkha chu (river) of the then North East Frontier Agency (NEFA); clouds had been gathering on the Indo-China border.

Many officers and jawans must have been in his case. One wife was the ‘regular’ one; the other one was the Indian Army.

Many decades later, after retiring as a Brigadier, Lakshman Singh wrote his memoirs A Soldier’s journey through life with two wives.

The young Captain was in love with Rosy, his life partner, but could not refuse the tough assignment. He was to man the communications of Brig. John Dalvi’s Brigade in the inaccessible terrain of Western NEFA, then known as Kameng FD (Frontier Division), today Tawang district of Arunachal Pradesh.

Torn between his two loves, Lakshman decided that the least he could do was to write a daily letter to his other wife Rosy (he calls her ‘Jeet’) who was left alone in Dehra Dun.

Fifty years later, Lakshman Singh still remembers his journey to the unknown, from the hot plains to the mountainous land, far away from his ‘first’ wife: “After a couple of days stay at Misamari (Assam), the Brigade rear was moving higher and higher and farther away from Jeet.”

A place known as Foothills was the entry point to Kameng FD. To reach the Tenga Valley, today’s main Army garrison in the area, it took a six-hour torturous drive.

Driving through the tiny village of Chako, the jeep driver suddenly stopped. Lakshman thought that the engine needed a bit of rest after the first hours of steep climb. Two young good-looking girls appeared on the scene: “Sir, would you like a good tea”. To show his own importance, the driver told the girls: “Yes, give tea to our Captain Sahib, he is joining his regiment in Tawang as a signal in-charge”. Lakshman still remembers the “two pretty girls of indeterminate race.”

Today he admits: “It was later discovered that they were Chinese spies, complete with a wireless transmitter; the antenna was cunningly hidden and well camouflaged in the tall bamboo, replete with the ubiquitous prayer flags fluttering gently in the cold mountain breeze spreading the message of peace around.”

This incident resumes the state of intelligence and counter-intelligence of the Indian side on the eve of the Chinese attack. The teashop was located at a very strategic location ‘with the girls in attendance’, explains Lakshman: “it was the proverbial magnet which worked like a dream. The chitchats by the girls with the soldiers, hungry for and denied of female company for long, only too willing to open up during the halts, provided them with all the intelligence they required on the movement and deployment of troops.”

This explains how Mao Zedong had the intelligence required to prepare his attack on the Indian positions on October 20.

The Great Helmsman told his colleagues of the Standing Committee of the Politburo on October 6: “It seems like armed coexistence won’t work. It’s just as we expected. Nehru really wants to use force. This isn’t strange. He has always wanted to seize Aksai Chin and Thagla Ridge. He thinks he can get everything he desires.”

Mao had been ‘informed’ that Lt. Gen. Kaul to decided to take back the Thagla ridge from the Chinese during an ‘Operation Leghorn’ which was to start on October 10.

Today Lakshman realizes: “my arrival would been reported to those concerned even before I reached Tawang.”

Unfortunately it was not only him; every officer remembers the ‘chai’ with the sweet girls.

The jeep continued its uneventful journey through grandiose scenery passing the small towns of Bomdila and Dirang on the way to the majestic Sela Pass; here they had to break their journey. The Signaler started writing to Jeet: “The journey till now had been incredible, mostly a roller-coaster ride. The road climbing to dizzy heights, as it wound up the mountains, disappearing into moist fog and mist, the overworked engine whining as the jeep climbed uphill and then it rushed back down the valley with the driver’s foot on the brake pedle, the brakes making a screeching sound, to emerge from the whiteout.”

After finally crossing the pass, they rushed down to Jang, the village at the bottom of Sela and a couple of hours later, they finally had the darshan of the majestic Tawang monastery: “Out of breath and struggling after having come straight from the plains of Assam, totally unacclimatized to the height, the cold and the rarefied atmosphere, I huffed and puffed up the steep trail making slow progress. Completely exhausted, I somehow made it to the Brigade Officers living area just as it was getting dark.”

During the first months in Tawang the young officer could relax, “life was boring and of routine nature… We were like prisoners albeit prisoners of peace.” They were told from the ‘highest intelligence sources’ that the Chinese were not in a position to take any offensive action… till the railway line to Lhasa was ready.” Everybody believed it.

But things changed after September 8. It was a Saturday.

That day, Lakshman was on leave; when he returned to the HQ, he felt a tension in the air. He quickened his pace. He remembers “unease in the atmosphere. Something was wrong, very wrong.”

He soon discovered that some 600 Chinese soldiers had surrounded the Dhola Post on the Namkha chu.

They would later realize that the Chinese always attacked on Saturday, when Indian senior officers would have a well-deserved beer in the mess or were attending an important dancing party at an Army’s club of Delhi, Lucknow (Command HQ) or Tezpur (Corps HQ).

In the morning of September 8, 1962, Chinese launched their first offensive. The Official Report of the Ministry of Indian Defence says: “troops were noticed moving across the Namkha Chu in the Tawang sector. In a few hours about forty of them crossed the river, virtually surrounded Dhola and threatened the small post manned by troops from 9 Punjab.” There was panic in the Indian camp.

The retired Brigadier is today bitter. He speaks about the lack of proper of appreciation: “The Commanders are supposed to prepare an appreciation of the situation, what is the threat, who is the enemy, etc”. At that time the appreciation was that the Chinese were not ready, unless they bring a railway line from Beijing to Lhasa. When asked who is to blame, Lakshman Singh bluntly says; “B.N. Mullik, the IB Director was a dope. He is responsible for the debacle. He kept saying that the Chinese won’t attack but China attacked us; unfortunately intelligence did not come from God, but from Mullik”.

Lakshman recalls: “The scene would have definitely appeared a bit comical to an outsider, ideal for a sequence in the war movies being produced in Bombay. Suddenly Hindi Chini Bhai Bhai became Hindi Chini bye bye”.

Everything suddenly changed; from its “well entrenched position for the protection of Tawang”, the Brigade was tasked to relieve the Dhola post and drive the Chinese out of the Indian territory. Poor Lakshman, he would not see Rosy soon: “And there went my holiday plans flying out of the window. What a disappointment!”.

It was a particularly painful for the signalers who had to work over long distances (from Army HQ in Delhi to Dhola post on the Namkha chu) through the most difficult terrain with antiquated equipment.

Maj. Gen. Niranjan Prasad, the GOC himself was getting frantic calls from the Corps Commander: ‘go to Tawang’; once in Tawang, he was told: ‘What are you doing here, go to Lumpu’, and so on, to the Namkha chu.

Then the new Corps Commander (Lt. Gen. B.M. Kaul) arrived one day at 4 pm, things then changed for the worse: “I am the GOC 4 Corps,” Kaul introduced himself. Nobody had heard of this 4 Corps; it was an adhoc creation to kick the Chinese out. Kaul was shouting: “move forward, I will sack whoever does not immediately move forward” There was total chaos. But the officers and soldiers had been trained to obey and not to question; and they all obeyed.

On October 19, the day before the attack, Lakshman was on the Namkha chu; he remembers Brig. Dalvi being told by the 4 Division’s GOC to send a platoon of Gorkhas to Tsangle (north of the river). Dalvi told his boss: “No, Sir, the Chinese will attack tomorrow, let me withdraw to a safer place. If you don’t agree, Sir, I am prepared to resign”. But it was too late.

The next morning, the Chinese attacked. At 4:30 am, after the shelling had started, Lakshman managed to speak for a few minutes to his CO, Lt. Col. K.K. Tewari, who himself was in the bunker further ahead on the banks of the Namkha chu. The Chinese had come down the ridge opposite the river a couple of days earlier (though the Indian troops were still told that China won’t attack). For a few minutes Tewari, gave a vivid running commentary about the Chinese surrounding him when suddenly all communications were cut. That was the end of Nehru’s grandiose plans to throw the Chinese out and the beginning of the most harrowing experience for the hapless 7 Brigade and India.

During the few next hours and days chaos prevailed. Some units fought heroically, more that 500 jawans and officers lost their lives on the Namkha chu alone; some managed to escape.

Lakshman trekked his way back to India via Bhutan. Rosy did not get any letters for a few days.

Fifty years later, he strongly feels that “at the time of duty, when the country is calling, personal issues should be set aside; one should totally concentrate on one’s profession. My profession (of soldier) always came first; this has been my Philosophy of Life”.

He was madly in love with his true wife, but duty came first when he had to serve his country.

One thought on “A Soldier with Two Wives”