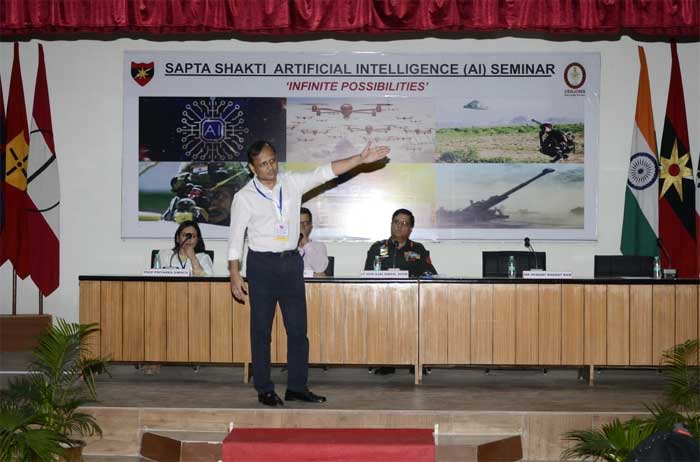 The Indian Army is set to incorporate artificial intelligence into its formations in constructive, protective and destructive purposes in the next three to four years, said commander of the Jaipur based South Western Command Lt Gen Alok Kler adding it would first be used in mechanised forces.

“We are a highly network enabled Army. We will see some constructive, protective and destructive use of artificial intelligence in Indian Army in 3 to 4 years. Mechanised forces will be the first to use it. AI will assist every force,” said the Commander.

The Indian Army, for the first time, has conducted a brainstorming session in which large number of domain experts, intellectuals, academia and representatives of the industry interacted at the field formation level.

One of the objectives of the seminar was to create an AI system that reduces dependence on manpower.

“The use of artificial intelligence will speed up our decision making process,” said Lt Gen Alok Kler.

“The seminar is an important step forward where all have put the thoughts into words, the gaps that existed in military requirement and civilian intelligensia have been discussed in detail,” adds he.

When asked about the threats posed by drones entering into Indian territory from rival neighbouring countries, Gen Kler said: “We don’t have to be worried about it as we have enough systems and capabilities. Their capacity for carriage is very low, their capacity is very small. Whichever drone enters our territory will be shot down by Army or IAF.”

However, experts believe that drones are an eminent threat for border security and India require to prepare a long term border strategy  to deal with it. Experts also feel that the policy to invest huge money to implement the Comprehensive Integrated Border Management System (CIBMS) needs to be reconsidered keeping in mind technical problems faced by advanced countries.

It is important to note that US and China have been leading the globe in AI technologies having specialised AI taskforces to incorporate robots and machines into 21 centuary warfare.

On the contrary, India first need to have a clear cut vision on AI as the middle income country cannot afford to invest heavily in the sector, experts opine. Army Chief Gen Bipin Rawat too said in January this year that if the armed forces don’t embrace Artificial Intelligence, India would be too late.

The Ministry of Defence, in its bid to augment use of Artificial Intelligence in defence forces, had established in February this year a high level Defence AI Council (DAIC) under defence minister Rajnath Singh which was assigned to provide strategic direction to induct AI in defence forces.

Later, the minister announced that 25 defence specific artificial intelligence products would be developed by 2024.

“In next three to four years you would find Artificial Intelligence assisted equipment with every Indian soldier,” claimed one of the experts to this defence journalist.