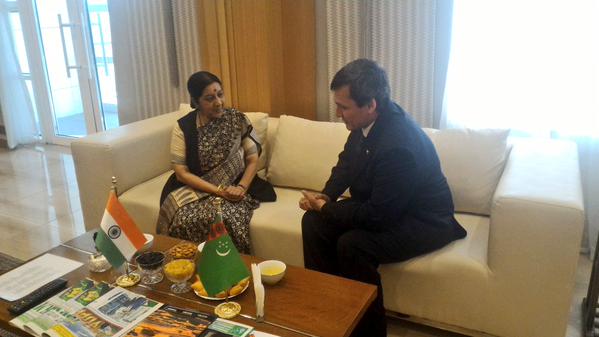 Indian External Affairs Minister (EAM) Sushma Swaraj had a stopover in Ashgabat, the capital of Turkmenistan, on October 19, 2015 while on her way to Moscow, where she co-chaired the annual India-Russia Inter-Governmental Commission. This was EAM’s second visit in last six months to Ashgabat; a period which  also saw Prime Minister Modi’s visit to Turkmenistan in July. The common issues that came up during the discussions held by both the Indian leaders with their respective counter-parts were TAPI gas pipeline and Ashgabat Agreement on trade and transit. The first matter concerns India’s energy security while the second pertains to regional connectivity.

The inclusion of Kazakhstan has increased the significance of the agreement by extending it further into Central Asia to the borders of Russia and China.

An agreement between five countries on establishing a new international transport and transit corridor (Uzbekistan – Turkmenistan – Iran – Oman– Qatar) was signed on 25 April, 2011 in Ashgabat. This agreement, known as “Ashgabat Agreement”, forms the basis for developing the shortest trade route/corridor between the Central Asian countries and Iranian and Omani ports.

The Memorandum of Understanding (MoU) on various aspects (legal, procedural, infrastructure ect) of the trade and transit agreement was signed five years later on 06 August, 2014 in Muscat. Oman has called for early completion of the legal, technical and basic requirements to ensure that the international trade corridor becomes operational by 2015.

While Qatar had withdrawn from the agreement in 2013, Kazakhstan will join-in this year, as its membership was approved during the first session of Coordination Council Meeting of the Ashgabat Agreement in Tehran on 15 Feb 2015. The inclusion of Kazakhstan has increased the significance of the agreement by extending it further into Central Asia to the borders of Russia and China.

…the leaders of the three countries had signed a MoU to construct a 250-mile railroad linking Afghanistan’s Akina-Andkhoy to Turkmenistan’s Atamurat-Ymamnazar via Pyandzh in Tajikistan.

To service the Ashgabat Agreement, Oman has earmarked a number of major and international ports such as Salalah Port, Duqm Port and Sohar Port. Iran is expected to nominate is ports at Chahbahar, Jask and Bandar Abbas.

Turkmenistan has been using some of its hydrocarbon revenues to leverage its geographical location by upgrading and expanding its railway network while linking it to those of its neighbours. Besides the ITK rail link, the other rail project is the Turkmenistan-Afghanistan-Tajikistan (TAT) rail line.

…initiatives such as the ITK rail link and India’s proposed investment in Chahbahar Port in Iran will strengthen connectivity between the two countries.

Turkmenistan also participates in TRACECA (Transport Corridor Europe-Caucasus-Asia), an international transport programme which includes the EU and 14 Eastern European, South Caucasus and Central Asian states. Turkmenistan expects its involvement in TRACECA to significantly reduce cargo delivery times compared to the traditional route from the ports of East and Southeast Asia to European ports, consolidating Turkmenistan’s position as an important regional and continental transit and transport hub.

The Inidan foreign minister’s first visit to Ashgabat was in April, 2015 when she co-chaired the Fifth Meeting of the India-Turkmenistan Inter-Governmental Joint Commission on Trade, Economic, Scientific and Technological Cooperation.  During consultations with Turkmenistan’s Foreign Minister Rashid Meredov efforts to deepen cooperation in transport sector for regional connectivity were discussed.

Prime Minister Modi during his visit to Turkmenistan in July expressed gratitude for Turkmenistan’s support to India in joining the Ashgabat Agreement. The joint statement on the visit proposed that Turkmenistan becomes a member of the INSTC as connectivity is an area of priority for both the countries. It was felt that initiatives such as the ITK rail link and India’s proposed investment in Chahbahar Port in Iran will strengthen connectivity between the two countries.

Swaraj during her visit in October was assured by the Turkmenistan Foreign Minister that Turkmenistan will soon be sending a copy of the Ashgabat Agreement to India for further discussion.

India’s strategy appears to be to participate in all regional connectivity arrangements that exist outside China’s the One Belt One Road (OBOR) or Belt and Road Initiatives (BRI). Second, be involved in connectivity initiatives that supplement and complement the INSTC. Thirdly, to diminish the leverage being exercised by Pakistan in curtailing India’s connectivity to Central Asian countries, who at the same time is promoting its own transit arrangements in the region. Lastly to optimise India’s trade routes to the EEU and the EU, both in terms of costs and time.

While Afghan President Mohammad Ashraf Ghani’s dream of making Afghanistan the ‘Asian Roundabout’ continues to be threatened by the Taliban insurgency, Turkmenistan is engaging its neighbours to establish itself as the regional transportation and transit hub. This places it prominently in India’s ‘Connect Central Asia’ initiative.