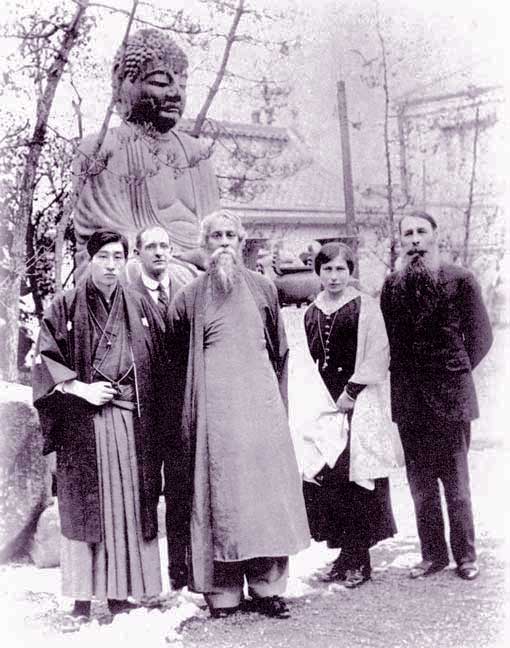 Rabindranath Tagore with The Mother (right) in Japan in 1916

Prime Minister Narendra Modi is soon leaving for Japan. For several reasons, his visit will not be an ordinary one. In a statement issued by the PMO, Modi explains: “I will visit Tokyo and Kyoto, and will interact with all sections of Japanese society from students, political leaders to captains of industry.”

Though Modi could not make it in early July (due to the ongoing Parliament session), the visit will undoubtedly be special as it will be the Prime Minister’s first bilateral meet outside the subcontinent, further Japan is an important strategic partner for India.

But there is more. Apart from the first ever defence cooperation agreement between Japan and India which is expected to be signed, there is a cultural and spiritual dimension to the visit as well.

Whether it is Swami Vivekananda, Rabindranath Tagore or Netaji Subhas Chandra Bose, many great Indians have been associated with Japan and have become admirers of the Land of the Rising Sun.

Whether it is Swami Vivekananda, Rabindranath Tagore or Netaji Subhas Chandra Bose, many great Indians have been associated with Japan and have become admirers of the Land of the Rising Sun. There is a reciprocity too and it is not a coincidence that the Japan-India Association was set up 111 years ago in 1903. It is today the oldest international friendship body in Japan.

A Ministry of External Affairs’ backgrounder points out:

Throughout the various phases of history, since civilisational contacts between India and Japan began some 1400 years ago, the two countries have never been adversaries. Bilateral ties have been singularly free of any kind of dispute – ideological, cultural or territorial.

Soon after Independence, Prime Minister Jawaharlal Nehru gifted an Indian elephant to the Ueno Zoo in Tokyo. This special gift brought light into the lives of thousands of Japanese children who had suffered the trauma of the War. The elephant, named Indira after Nehru’s daughter, lived till 1983.

Officially, the first cultural agreement between India and Japan was signed in October 1956, establishing a scholarship system for young Japanese scholars to study in India. A year later, Japanese Prime Minister Nobusuke Kishi travelled to India, and Jawaharlal Nehru visited Tokyo later in the year.

But the relations between India and Japan are much older and deeper.

India’s earliest documented direct contact with Japan dates from 752 CE when the Todaiji Temple in Nara was consecrated by an Indian monk, Bodhisena, who performed the eye-opening of a statue the Buddha Sakyamuni.

Jinnutsuke Sano, a student of Keio University, eventually came to Tagore’s school,  where he stayed from 1905 to 1908. It is how judo was first introduced to India.

Buddhism had been introduced to Japan in 538 CE. The king of Baekje, a Korean principality, gifted a shiny image of the Buddha along with some scripture-scrolls and ornaments to the Japanese Emperor Kimmei.

Though some traditionalist clans opposed the new faith, considering their Shinto indigenous tradition as far more adapted to Japan, the influential Soga clan adopted Buddhism as a State religion.

Fervently respect the Three Treasures (the Buddha, Dharma, and Sangha).

Prince Shotoku ordered the Government to start building Buddhist temples. The most famous of them, the Horyu-ji temple, the world’s oldest wooden structure, still stands near the former capital of Nara.

It was because of this prince’s patronage and devotion to the Three Jewels that Buddhism was firmly established on Japanese soil.

During a lecture in Tokyo in 1916, the Great Poet Rabindranath told a Japanese audience:

While travelling in a railway train I met, at a wayside station, some Buddhist priests and devotees. They brought their basket of fruits to me and held their lighted incense before my face, wishing to pay homage to a man who had come from the land of Buddha. The dignified serenity of their bearing, the simplicity of their devoutness, seemed to fill the atmosphere of the busy railway station with a golden light of peace. Their language of silence drowned the noisy effusion of the newspapers. I felt that I saw something which was at the root of Japan’s greatness.

The Japanese are taught from their infancy that life is duty and not pleasure.

Tagore said he reached the conclusion that the welcome…

…which flowed towards me, with such outburst of sincerity, was owing to the fact that Japan felt the nearness of India to herself, and realised that her own heart has room to expand beyond her boundaries and the boundaries of the modern time.

The Nobel Laureate was a great admirer of traditional Japanese martial arts, particularly of jujutsu, the original form of judo.

Gurudev was determined to bring this art to India. In 1902 in Kolkata, during a meeting with Tenshin Okakura, the Japanese eminent writer and art critic, Tagore requested him to send judo instructors to Shantiniketan. Jinnutsuke Sano, a student of Keio University, eventually came to Tagore’s school,  where he stayed from 1905 to 1908. It is how judo was first introduced to India. An interesting aspect of the training was that girls took part along with boys. Quite a revolution!

Father had brought a jujutsu expert from Japan. We took lessons from him in order to prepare ourselves to fight the British! Had not the spirit and training of judo helped the Japanese to win the war?

Remembering the deep connection between Tagore and Japan, Visva-Bharati established a Japanese department in 1954 under the guidance of Probodh Chanda Bagchi. This made Visva-Bharati the first Indian university to introduce Japanese language courses.

Narendra Modi rightly noted, “The scale of innovation and level of precision among the people of Japan is admirable. Both our nations can learn a lot from each other.”

Another eminent person who served as a bridge between India and Japan is the Mother, Sri Aurobindo’s French-born collaborator. She spent 5 years in Japan between 1915 and 1920. She beautifully described the Japanese genius, she wrote:

If you have — as we have had — the privilege of coming in contact with the true Japanese, those who kept untouched the righteousness and bravery of the ancient Samurai, then you can understand what in truth is Japan, you can seize the secret of her force. They know how to remain silent; and though they are possessed of the most acute sensitiveness, they are, among the people I have met, those who express it the least.

The Mother, who settled in Pondicherry and worked with Sri Aurobindo to create the Ashram, later recalled:

A friend here can give his life with the greatest simplicity to save yours, though he never told you before he loved you in such a profound and unselfish way. Indeed he had not even told you that he had loved you at all.

She spoke of the Japanese unselfishness which…

is not the privilege of the well-educated, the learned or the religious people; in all social ranks you may find it.  …The Japanese are taught from their infancy that life is duty and not pleasure.

This sense of unselfishness, of beauty, of love for nature, along the martial aspect of the Mahayana Buddhism touched many Indian souls.

Narendra Modi rightly noted, “The scale of innovation and level of precision among the people of Japan is admirable. Both our nations can learn a lot from each other.”

India has certainly a lot to learn from Japan, though cricket fans cleaning the stadium after a test may not happen just yet.