India: A Continental and Maritime Power

is a student at the NALSAR University of Law and a freelance writer on geopolitical and international affairs. 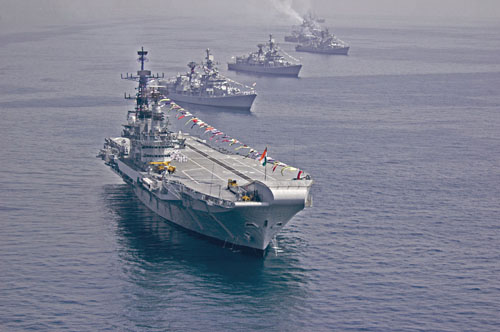 “The Chinese annexation of Tibet as a buffer state then presents India with a landward dilemma on two fronts as it has never experienced before. And this is the reason than even today the Army is the biggest stakeholder in the defence budget…”[2]

As highlighted by me in my response to Daanish Inder Gill’s article,[3] India’s foremost concerns are to be found on its land borders; a fact that escapes Daanish’s attention in his diatribe[4] where he in any case fails to see the wood for the trees. As the International Fleet Review 2016 (only the second one in Indian history) just concluded, apparently Daanish was party to some information that eluded the collective Indian establishment (ranging from its political leadership, to the defence services (including the Army) and even the bureaucracy). As noted by Admiral Arun Prakash:

“While the IN had, no doubt, always nurtured a lofty vision of itself as a blue water force at some future point of time, this vision was shared neither by the politicians nor the bureaucracy. It is only during the last two decades that the key factors enumerated above have combined to convince India’s politicians, diplomats, bureaucrats and others that India’s security as well as destiny are heavily dependent on the oceans.”[5]

Since Mr Daanish pleads ignorance as to the facts necessitating the fulfillment of functions that maritime power enables its user to fulfill, a quick education about the distinctive features of the Indian Ocean region is in order. The following are some of the points enunciated superbly in the previous (2007) edition of India’s Maritime Military Strategy[6]:

Given the existence of “extreme diversities of economies” with some of the “richest countries…fastest growing economies…(and) poorest countries in the world” the region has but naturally seen the outbreak of a large number of conflicts in the post Cold War period along with enhancements in maritime capabilities. Being the region with a third of the world’s population and only a fourth of the landmass it is not surprising that some of the worst hit areas when it comes to “piracy, gun-running, human and drug trafficking” are located in the Indian Ocean Region. The Indian Ocean Region is clearly identified as being “the de facto home of global terrorism” and the “locus for 70% of the worlds disasters“. As if these factors internal to the region were not sufficient to justify the pursuit of a strong navy there is the factor of external involvement to be considered as well. With the region possessing “65% of the known reserves of strategic raw materials, 31% of the gas and…more than half of the world’s oil exports“, the area continues to attract the attention of extra-regional navies.

No one has advanced that as things stand India must prioritize its naval development over its land forces. This does not mean though that India can afford to make unbalanced force modernization decisions that ignore the maritime component. Daanish seems to have missed the train when India committed itself to attaining a “Blue Water Navy”[7] and becoming a “net provider of security” in the Indian Ocean region.[8]

The first point Daanish fails to appreciate in his response relates to the nuances of the direct deployment of military power through naval means. The second point which Daanish chooses not to engage with relates to the non-kinetic application of maritime power that is so inherent to the concept of being a net provider of security.

The third point which Daanish has failed to engage with is India’s sea dependence for oil and trade and how those interests can possibly be served by not cultivating a maritime outlook.

Daanish confines himself to saying that India should hope that everyone will follow international law and that India shall therefore not require a navy to protect its interests. In fourth point I address historical factors, factors which are of minimal relevance in the present exchange of views and yet this is the portion which Daanish has devoted his maximum attention to in his response.

On the first point, I place reliance upon Zorawer Daulet Singh’s piece since I agree with him that a naval expansion does not mean that India must discard its continental focus.[9]  Gerson & Whiteneck’s piece[10] as also observed (mercifully) by Gill is about the role of naval forces in conflict deterrence – a vital maritime role identified by Zorawer Daulet as well.[11]

Deterrence has a twofold understanding – conventional and nuclear. The superiority of naval forces to contribute to the same vis a vis  a specific Army arm- the artillery is beyond question. The Indian nuclear deterrent being based on a credible nuclear deterrent with the assurance of massive retaliation depends critically upon the survivability of one’s own nuclear forces. Nothing speaks for dispersed nuclear forces with high survivability against surprise attacks than the sea-based component of a nuclear triad.[12]

Conventional deterrence is based upon having the requisite combat power to exercise deterrence by denial and deterrence by punishment. The reason one requires naval units to strike targets in place of land units is not rooted primarily in how effectively they can do so in as much as the range of targets that they can strike. The artillery arm is useful against land based targets. A naval task force by contrast can strike not only on land but also targets on the seas whether they be near our shores of half a world away.

Daanish correctly notes that on land the Chinese have immense logistical and geographical advantages that India does not. While India should respond to this situation, it would be impractical for India to focus upon an exclusively land based response against an adversary whose resources far outstrip our own. This is so because while the landward geography favours China, at sea it is India which is favourably located. China’s extended sea lines of communication which need to pass through the Indian Ocean can be easily exploited by India to not only match but best China in the maritime domain.  The possibility of India using the Andaman Islands as a metal chain so as to impede Chinese access to the Straits of Malacca[13] is something that worries the Chinese to no end. That the Chinese hope to have increasing influence in the Indian Ocean Region is also well known. The PLA Navy (PLAN) is undergoing a historic shift from concentrating not just on “offshore waters defense” but also “open seas protection” and hence focusing on Far Seas Operations.[14]

The tyranny of distance however severely curtails the stronger powers advantages against a weaker opponent that has the home ground advantage (India in this case).[15]

Daanish’s point that SLOC’s are ‘international common’s’ blockading which will antagonize neutral powers is on shaky ground given that he does not recognize the distinction between International Shipping Lanes (ISL) (which are the internationally used sea trade routes) and Sea Lines of Communication (alternate routes that need not necessarily coincide with ISL’s).[17]

The second point relates to the non-kinetic application of maritime power activities. This involves the shaping of a favourable and positive maritime environment to enhance net security therein.[18]

This encompasses activities like deployments and exercises in areas of interest to India, maritime capacity building and enhancement, cooperative development of regional Maritime Domain Awareness and conducting maritime security operations.[19]

The third point flows from my previous observation that  India’s ‘sea dependence’ for oil is about 93% and over 70% of its trade by value and 90% by volume is carried by sea.[20].

Daanish has quite conveniently chosen to ignore this point and address how such interests can be secured absent investments in maritime power.

Furthermore, it beggars belief that in a serious academic discussion it has been suggested that a nation renounce the means to pursue its legitimate right of self defence in the hope that observance of international law by all other nations shall keep it secure.

There are two glaring problems with this assumption. One, is that even in a perfect world where this was the case, there would still exist  a host of disruptive non-state actors and naturally occurring disaster events which necessitate investments in the maritime domain to deal with them. Second and more important is that strategic planning is not undertaken based on cheery & hopeful appraisals of what the future may hold.

This especially cannot be done where a territorial neighbour (China) is challenging the very foundational assumptions of the ‘international commons’ regime in the South China Sea.

There are a wide variety incidents that can be recounted to demonstrate the flagrant and repetitive violation of international law in cases involving peripheral state interests, let alone matters involving conflict that generally involve core interests. No example though quite measures up to that of the Second World War. It is widely known that a direct outcome of World War I was the adoption of the Covenant of the League of Nations following the Paris Peace Conference. What is not as widely appreciated is the wider movement which continued even after that to regulate a state’s recourse to use force.

The fourth point sees Daanish cursorily mention (without any supporting evidence) how the French, the Dutch & the Soviets supposedly plunged to their ruin due to over-investment in their navies (an overly simplistic claim in any event). Daanish’s claim of major economies having risen to the fore without the need for a blue water navy is hogwash. All the world’s major economies today have either directly pursued the development of their maritime power or have sought to secure the benefits of the same indirectly through alliances and related political arrangements. The link between wealth and military power as a symbiotic one with wealth underpinning military power even as military power is required to acquire and protect wealth has been sufficiently well documented by Paul Kennedy.[23] That in India’s case this military power must translate into naval might as well has been demonstrated in the preceding sections.

History has been clear that no power strong enough to reign over all India ever emerged till the control of Indian waters remained in its hands which was until the mid 13th century (Initially the supremacy fell to the Arabs who being commercial navigators and not acting as instruments of a ‘national’ policy did not exploit this. This was begun by the Portuguese). Even the Mughals were powerless at sea during the zenith of their own power. [24]

As Pannikar ultimately notes, “While to other countries the Indian Ocean is only one of the important oceanic areas, to India it is the vital sea. Her life lines are concentrated in that area. Her future is dependent on the freedom of that vast water surface. No industrial development, no commercial growth, no stable political structure is possible for her unless the Indian Ocean is free and her own shores fully protected. The Indian Ocean must therefore remain truly Indian.“[25]

[21] This Pact had 63 state parties with only four states in existence before World War II who were not bound by its provisions, indicating its near unanimous acceptance

[24]KM Pannikar, “An Essay on the Significance of Sea Power on Indian History,” 8, Printed in Great Britain    by William Brothers & CO Ltd, Birkenhead (1945)

[25]KM Pannikar, “An Essay on the Significance of Sea Power on Indian History,” 84, Printed in Great Britain by William Brothers & CO Ltd, Birkenhead (1945)

2 thoughts on “India: A Continental and Maritime Power”