During WWI, the regiment was in North West Frontier & remained there to take part in Third Afghan War in 1919. 1st & 3rd Regiments of Skinner Horse were amalgamated in 1921 to form 1st/3rd Cavalry.

3rd Regiment: 3rd Regiment was raised at Hansi on December 7th 1814 by Capt. James Skinners as the “Second Corps” & was commanded by his younger brother Robert Skinner till his death in 1821. Capt. William Clinton Baddeley, an officer of 24th Bengal Native Infantry, assumed the command & the unit got the title “Baddeley’s Frontier Horse”, which changed to “4th (Baddeley’s) Local Horse” two years later. Regiment took part in capture of Khetal & Ghazni during 1st Afghan War, the Gwalior Campaign where they captured a standard of Maratha Army during the Battle of Maharajpore. Regiment fought all the battles of First Sikh War.

During WWI, the regiment went to France as a part of the Meerut Cavalry Brigade & took part in all the battles fought by 2nd Indian Cavalry Division till 1916 when it came back to India on North West Frontier where 80 men of the regiment fought so well in the defence of Gumbaz Post that the action merited inclusion in the official list of battles of WWI. 1st& 3rd regiments of Skinner Horse were amalgamated in 1921 to form 1st/3rd Cavalry.

1st/3rd Cavalry: In May 1921, during the reorganization of the Indian Army after WWI, 1st& 3rd regiments of Skinner’s Horse were amalgamated to form 1st/3rd Cavalry. The regiment got its more appropriate title “Skinner’s Horse (1st Duke of York’s own Cavalry)” in 1927. The regiment bade farewell to its horses in 1939 to become a motorized unit and moved to Sudan as 5th Indian Division’s reconnaissance regiment.  Regiment began operating with Gazelle Force & fought, most certainly second last horse mounted battle³when in early 1941, it was attacked by an Italian officered local cavalry unit. After beating back the Italian attack, sowars of the Skinner’s Horse regiment rounded up the abandoned horses of the Italian unit & rode them triumphantly. Commander of the Italian unit, Capt. Baron Amedeo Guiller, became a lifelong diehard fan of the Indian cavalry. When he became Italian Ambassador to Indian in 1970, he was made an honorary member of the 5th Indian Division.

The regiment then served in Egypt, Cyprus & Italy before coming home to serve in North West Frontier. After independence, regiment took part in Hyderabad Police Action in September 1948 to clear Bidar axis. In 1960, Lt. Col. Michael Alexandria Robert Skinner, great great grandson of the founder James Skinner, assumed command of the regiment. After 120 years, Skinner’s Horse regiment was commanded by a Skinner!

1st Regiment: During the early years (around 1803), 1st Skinner’s Horse recruited men from Haryana & Doab (area between Sutlej & Bias river) district. Most recruiters were Muslims (Moghuls &Syeds) with a few Rajput & Brahmins. But as there was space for any adventurer, Pathans&Baluchis also joined the regiment. At the end of the World War I, regiment had four squadrons of Hindustani Muslims each of Moghuls, Ranghars, Syeds & localized Pathans recruited from Delhi, Haryana & Western UP. It was a class muslim regiment.

3rd Regiment: In the beginning, just like 1st Regiment, majority of the men of 3rd Regiment were muslims but in 1864, the composition of the regiment changed & it had one troop each of Muslim, Dogra, Sikh, Jat, Rajput & Brahman (in total, 3 squadrons). In 1885, a squadron (2 troops) of Sikhs were added & two years later, in 1887the regiment had one squadron each of Sikhs, Jats, Ranghar and half a squadron each of Rajputs& Hindustani Muslims. Later the composition was changed to one squadron each of Sikhs, Jats, Rajputs (from Eastern Punjab & Jodhpur) and Muslim Rajputs.

Skinner’s Horse (1st Horse): After independence, the regiment stayed with India as Skinner’s Horse (1st Duke of York’s own Cavalry) & then in 1950, its title was changed to Skinner’s Horse (1st Horse). In August 1947, the unit was posted in Dera Ismail Khan from where it moved to Ahmedabad. The painful part of that era was the division of the regiment. As per the settlement between two nations, irrespective of the feelings or willingness of the muslim squadrons of the cavalry, they were to be transferred to Pakistan, so Hindustani Muslim &Ranghar squadrons of the Skinner’s Horse were given to Pakistan Armoured Corp in exchange of a Sikh Squadron from 19th King George V’s own Lancers. Muslim &Ranghar squadrons of the Skinner’s horse did not want to leave their ancestral home where they have been serving the regiment since 1803. This hesitation proved costly to them as Pakistani authorities, suspicious that their loyalty was divided, broke up those squadrons into small segments & allotted them to 19th K.G. V. O. Lancers, 11th P.A.V.O. Cavalry & other units. After independence, the regiment started recruiting Jat, Rajputs & Sikhs.

Skinner’s Horse had one of the most fascinating uniforms in the entire British Commonwealth forces. Selection of the bright yellow colour added a unique flavor to the ceremonial uniform. During the second half of the 19th century, British officers were so fond of traditional ceremonial dress that they can be seen in those dresses in most of the photographs. Here are few painting / illustrations showing different ceremonial uniforms worn by different ranks at different occasions. 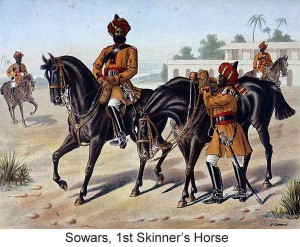 Sowars, 1st Skinner’s Horse: Uniform consists of red coloured pugri with yellow stripes wrapped around red khulla tied right over left with a paloo at the rear. Kurta is yellow in colour with 3 buttons opening on the front. Black coloured belt is worn on red cummerbund. Shoulders chains are bastion ended with small links and are supported by red coloured cloth. Breeches are white and boots seem to have detachable calf section. The spurs are steel with leather strap & foot chain. 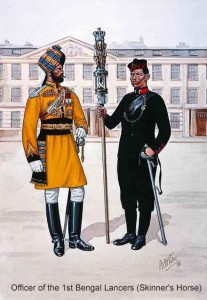 Officer of 1st Bengal Lancer: This native officer wears the full regimental dress. Pugri is yellow or golden with blue stripes wrapped around gold khulla tied left over right with a paloo at the back. Yellow kurta has black velvet facing. Front, chest, collars & cuffs are gold laced backed by red cloth. Cummerbund is black with gold & blue stripes on it. Officer is wearing a leather belt covered with black velvet with two rows of gold lace over the cummerbund. The sword was slung from two straps similar to the belt but slimmer than the belt, suspended on rings fixed to the belt. As per 1913 Army Dress regulations, the Pouch & Belt worn by this officer should have a silver star with monogram DYO & a scroll inscribed “Himmat I Mardan, Madad I khuda”; over the monogram, a mounted lancer & a scroll bearing the same motto in urdu; above the star, a Tudor crown & above that a scroll inscribed “Skinner’s Horse”; below the star, scrolls bearing regiment’s battle honours ‘BHURTPORE’, ‘CANDHAHAR 1842’, ‘ AFGHANISTAN 1879-80’ & ‘PEKIN 1900’. The Pouch should have a design of two crossed lances with a monogram DYO in center with ‘1’ above & a York rose below the monogram.

Major 1st Skinner’s Horse, 1914*: This British officer wears full Regimental uniform. Black coloured pugri with golden stripes is tied left over right around gold & red khulla with a paloo at the back. Bright yellow kurta opens all the way down at the front & has a slit opening from the waist down, at the back. Front is secured by three buttons & collar by hooks & eyes. Buttons bear the design of crossed lances with York Rose at the intersection point. Facing are black velvet & front, chest, collar & cuffs are decorated by gold lace backed by red cloth. Cummerbund is black with its end, having black & golden stripes, is falling up to the length of the kurta. Belt plate has a design raised in silver consisting of crossed lances with monogram DYO in the center with ‘1’ above & York Rose below. Shoulder chain bastion ended with small links backed by black cloth. Boots are black with steel spurs, straps & chains. Breeches & gauntlets are while.  Design of the belt has already been explained above. This dress was retained as Regimental ceremonial uniform after the amalgamation of 1st& 3rd regiment.

Risaldar Major, 3rd Skinner’s Horse, 1912*: This beautiful ceremonial dress was worn by British & Indian officers. Pugri is dark blue with golden, white & blue stripes tied right over left around gold embroidered khulla. Pug is red in colour. Dark blue kurta opens all the way down the front & secured by 4 buttons (4th button is hidden by the cummerbund). Facing colour is Primrose Yellow & can be seen around the neck & below the buttons. Cummerbund is scarlet with Kashmiri embroidered end. Cuffs & chest area are decorated with gold braid forming a pattern of alternating loops & Austrian Knots. The pouch belt, waist belt & sword sling are gold laced. Waist belt has a raised silver design of a monogram E.R.I. surmounted by a Tudor crown encircled with a wreath of laurels & a motto “Dieu et monDroit”. White breeches, white gauntlets & black boots with steel spurs & foot chains complete the uniform.

Lt. Colonel, 3rd Skinner’s Horse 1910*: This British officer wears a European pattern full dress which is mentioned as optional in 1913 Dress Regulations. The helmet is white Wolsley pattern with brass fittings. The dark blue tunic has a primrose yellow collars & cuffs. Cuffs are decorated with Bengali knots. Chest is decorated with five plaited swags of gold cord each terminating in gold worked olivets. Base & front opening of the tunic also edged in gold cord. The twisted shoulder cords carry embroidered rank badge of a Lt. Colonel. The dark blue pantaloons had a 1.5 inch gold lace stripes down each leg. Black boots & white gloves complete the uniform.

Major, Winter Mess Dress, 3rd Skinner’s Horse, 1903*: This is a painting of a Major of 3rd Skinner’s Horse wearing a beautiful mess dress. The jacket is dark blue with primrose yellow facing on collars & cuffs. The garment is edged all round with 1 inch gold braid. Base of the collar is decorated with gold cord. Shoulder cord is gold gimp & carry embroidered rank badge of a major. The front of the jacket is decorated with small gilt studs & secured at collar with loop of tracing braid. The beautiful waistcoat is primrose yellow coloured with the front & collar being decorated with intricate patterns of gold lace. Dark blue pantaloons with 1.5 inch gold lace stripes down each leg complete the uniform.

Sowar, 3rd Regiment of Bengal Cavalry, 1900*: The sowar wears a dark blue pagri with golden, light blue & white stripes wrapped around a red khulla tied right over left with an embroidered paloo at the back reaching the waist. Dark blue kurta has 3 buttons opening; the collar is low & rounded at the front; three gold lace chevrons indicate long service & good conduct. Shoulder chains are large linked bastion ended backed with dark blue cloth. A broad scarlet cummerbund is worn under a sambrowne kind of leather belt that has an ammunition pouch on right & a sword is suspended from leather sword sling on the left. White breeches & black shoes complete the uniform.

Lieutenant, cold weather mess dress, 1st Skinner’s Horse, 1908*: This illustration shows British officer in cold weather mess dress.The jacket is bright yellow in colour with Collars & cuffs in black velvet. Thick gold lace decorates the collar, front opening, waist & the pointed cuffs. The front opening has a row of gilt studs but the jacket is secured at the throat by a loop of tracing braid. The interior is lined with drab silk & epaulettes are of gold wire lined with black with the rank stars embroidered in silver. The mess waist coat is of black velvet with five gold lace olivets fastening down the front, edged in gold gimp & finished in finer gold braid. The overalls had double gold stripes which was changed to yellow in 1913 Dress Regulations.

*  Photos have been taken from the book ‘Skinner’s Horse’ by Christopher Rothero.