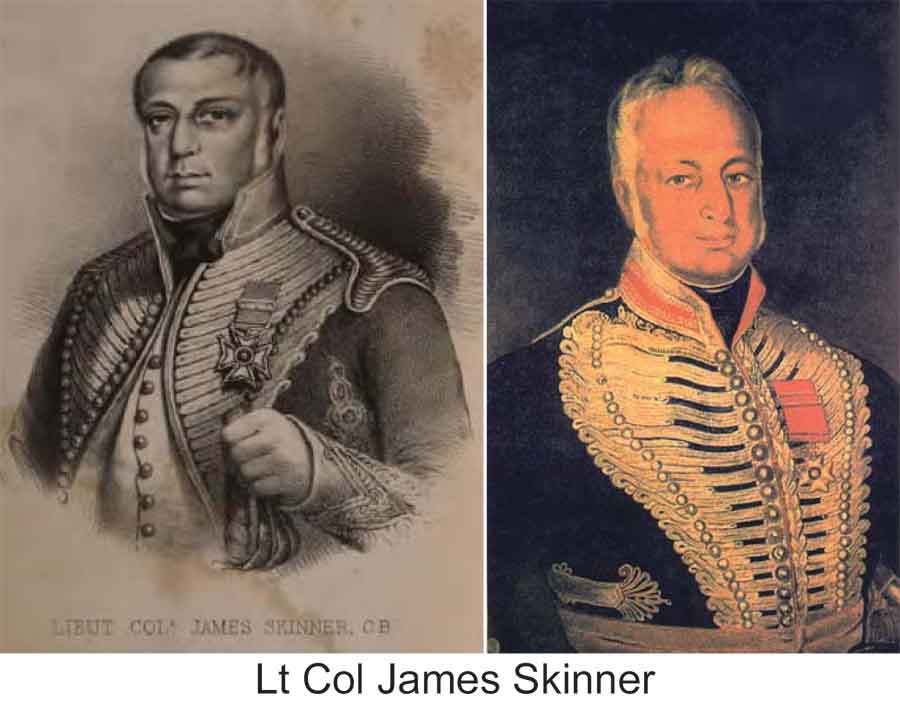 Skinner’s Horse: – One of the most distinguished cavalry regiments of the Indian Army was raised by legendary Lt. Col. James Skinner in 1803 at Hansi. Regiment was raised as Local Horse, became an irregular unit in 1840 but due to its outstanding performance and defection of the entire Bengal regular cavalry during the Great Mutiny of 1857, it became a regular regiment in 1861.

The Founder: – James Skinner was born in 1778 in India to Lt. Col. Hercules Skinner, a Scottish and an officer in Honourable East India Company’s Army. His mother was a Rajputani, daughter of a Zamindar who was taken prisoner at an age of 14 & since then she was with Lt. Col. Skinner who later marry her. The couple had 6 children – 3 girls & 3 boys; David, James & Robert. Hercules wanted to educate her daughters but his wife, who had strong belief in Rajput traditions & culture, was against it. She felt so strongly about it that she committed suicide when she could not do anything about it.

James Skinner was first educated in a charity school & at a boarding school. His first job was in a printing press in Calcutta as an apprentice. He did not like the job & ran away, surviving with some odd jobs in bazaar. Soon he was found & taken back home. Then he worked in a law firm. He did not like that job either because he wanted to become a soldier in HEIC’s army but he was denied commission as he was a country born. He was then suggested to join Maratha Army.

A Frenchman Benoit de Boigne was the commander of forces of Maharaja Scindia of Gwalior state. James joined Scindia’s Army in 1805 & served for 8 years , first under de Boigne& after his retirement, under Perron. After de Boigne’s retirement, Perron became commander of Scindia’s forces & had a body of 5000 native horsemen, called Perron’s Horse¹. In Jan, 1800 in a battle of Unaira, Skinner was shot in the groin & considered dead was left in the battlefield where without food or water, he fought for his life for almost 24 hours, from early afternoon until the dawn next day. This is where he vowed to make a church if he survives. His prayers were heard & an untouchable woman found him in the battlefield. She gave him food & water. He was taken to the enemy camp where he was treated well & was released as soon as he recovered. James sent Rs. 1000/- to the woman who saved his life & fulfilling his oath, he built St. James church near Kashmiri Gate, New Delhi.

During Angelo-Maratha war of 1803, Skinner decided to remain faithful to Scindia but he was dismissed from the service for being a British! Then Lord Lake invited him to raise a regiment of Irregular Cavalry. Skinner accepted the offer but on one condition that he & his regiment will never be asked to draw their swords against his former master – the Maharaja of Scindia. After Scindia’s defeat in 1803 at Aligarh, 800 men of Perron’s Horse offered to join British forces. When they were asked to choose their leader, they unanimously shouted “SikandarSahib” & finest regiment of Indian cavalry started taking shape.

Regiment saw continuous action for next 6 months& after the battle of Malagarh, Capt. Skinner was placed in general command of the area between Aligarh & Delhi. But in 1806, Skinner was asked to disband the unit for economic reasons. He was allowed to keep a nucleus of the regiment & was given a grant of land & an income of Rs. 20000/- per annum. But this income was later reduced to Rs. 300/- per month!

In 1809, he was again ordered to re-raise the regiment. Strength of the regiment kept on changing till 1825 when James had 3000 men under his command & surprisingly he was holding rank of a Major. In 1826, he was to be made Companion of Bath but then it was realized that his rank was not high enough for the honour. Finally it was decided to promote him to Lt. Col. , not because he was the ablest cavalry commander of the Indian army but because King George IV himself decided to confer an honour on him. Now James was a Lt. Col. & had reached limit of his promotion prospects. He was holding rank of Brigadier locally. He once wrote “I imagined myself to be serving a people who had no prejudices against caste & color but I find myself mistaken”.

He was more Indian then European & had a large family with 14 wives! He had a mention in Delhi & country houses in Hansi&Bilaspore where he used to take great interest in farming. He was fond of delicious Indian food & hookah. He was more comfortable with Persian then English & spoke the local dialect fluently. He knew names & village of origin of all his men & would often invite his men of all ranks to feast with him and lay an old spoon next to his plate to remind him of his humble beginning. Deep information of his men, their language, culture and his leadership qualities made him the ablest commander of Indian cavalry. He dies in Dec 1841 & was buried at Hansi. Two months later, his remains were brought to his final resting place – St. James Church, New Delhi that he built with GBP 20000 of his own money.

The Regiment: – When Lord Lake asked James Skinner to raise a unit of irregular cavalry, 800 men of Perron’s Horse unit of Scindia were readily available (after Lord Lake had defeated Scindia’s forces). These 800 men were willing to join British forces & when they were asked whom would they choose as their new commander, they unanimously shouted “Sikander Sahib”. That’s how the finest cavalry regiment of the Indian Army born on 23rd Feb, 1803 at Hansi. By 1814, the regiment grew to 1st, 2nd& 3rd regiments of Skinner’s Horse & each regiment was 1000 men strong. 2nd Regiment was commanded by James’ younger brother, Robert Skinner & the 3rd regiment was commanded by Major William Fraser till it was disbanded in 1819. In 1815, establishment of each regiment was as follows: –

In 1809, Galloper guns were attached to the regiments & 1 Havildar, 1 Naik& 50 Sowars were added to work with the guns. During the reorganization of 1861, 2nd regiment was renumbered as 3rd& it retained that number till 1921 when both the regiments were amalgamated to form 1st/3rdCavalry regiment. Titles of 1st& 3rd regiments of Skinner’s Horse kept on changing from 1803 till 1947. Here is a list of the titles: – 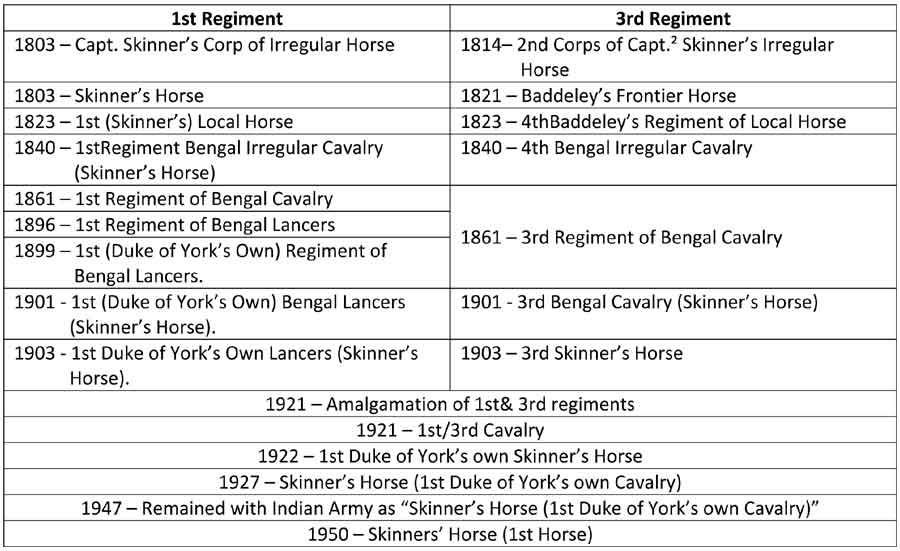 In 1823, 5 Corps of Irregular Horse in the Bengal Army were re-designated as Local Horse. Skinner’s regiment being the senior most got the numeral 1st and the regiment got its title “1st (Skinner’s) Local Horse”. The regiment worked as Local Horse unit till 1940 when, during the First Afghan War it was found that they were not entitled to draw ration from the commissariat. Just before the men & horses of the regiment started starving, they were reclassified as “1st Bengal Irregular cavalry”& commissariat started issuing ration to them. During the Great Mutiny of 1857, defection of the entire Bengal cavalry made Skinner’s Horse the senior most regiment & it became “1st Regiment Bengal Cavalry” in 1861. 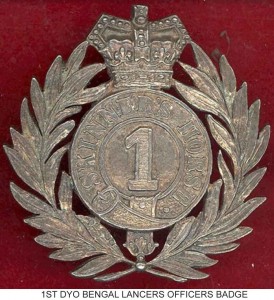 During the 1903 reorganization of the Indian Army, it was proposed to rename the regiment as “4th (Duke of York’s own) Mohammedan Regiment Of Indian Cavalry” but it was turned down. The unit retained its numerical superiority & founder’s title and became the “1st Duke of York’s Own Lancers (Skinner’s Horse)”.

The regiment was famous as ‘Yellow Boys’ because of the colour of their uniform. James Skinner, being half Rajput, selected this colour keeping the Rajput traditions in mind. It was said that a Rajput sardar going out to war would vow that either he will come back victorious or will die fighting. His men would honour his spirit & tie a yellow or saffron cloth around their heads & ride off into war to earn victory or martyrdom.

Right after its raising in 1803, one of the Skinner’s Horse regiment was present on any scene of action. Let it be Malagarh (near Meerut), the Anglo-Nepal war, Campaign against Pindaris, the second siege of Bhurtpore (Bharatpore), First Afghan War, Sikh Wars, 1857 Revolt, Second Afghan war, Boxer Rebellion, North West Frontier, Third Afghan War, World War I & II. 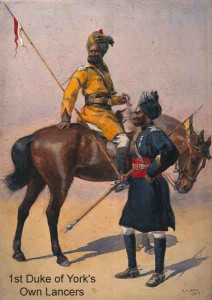 1st Regiment:  After the victory of Malagarhin 1803, Capt Skinners was placed in general command of the country between Allygurh (Aligarh) & Delhi. After Scindia was defeated, British turned towards Holkar& SH were part of the British forces. During this campaign, newly recruited sowars started deserting. James tried to persuade them but was unsuccessful. Finally James, in anger, called them cowards & several shots were fired upon him. Seeing this, his ‘Khas Rissala’ came rushing, shouting their battle cry, they cut 2/3rd of mutineers to pieces. Rest escaped to Raja of Hathras. All the shots fired by the mutineers had hit James horse & he himself had a narrow escape. Lord Lake was so impressed by James gallantry & SH’s service to British against the Raja of Hathras that he presented his own sword to James & Rs.20000/- for sowars. During the same campaign, for Skinner’s Horse service against Holkar, Lord Lake presented a fine horse with silver trapping and a pair of his own pistols to Capt. Skinners. Lord Lake inspected the regiment & appreciated them with the memorable words, “By your service, you have established a claim for life on the British Govt, which shall never be forgotten and your bread is made permanent.” 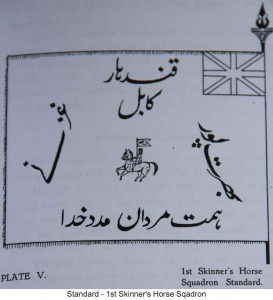 The regiment performed so well while guarding the construction of the Ganges canal that Irrigation Department of United Province adopted yellow as the colour of their uniform as a mark of their respect.

During the second Afghan War of 1879-1880, a sowar from 1st Regiment, Mazhir Ali Khan, saved life of Lord Roberts in the battle of KilaKazi. In 1900, the regiment went to China to suppress Boxer rebellion & made a brilliant charge cutting up the tartar cavalry, captured three standards & some cannons during their march up to Beijing. It also made a joint attack with a cavalry unit of United States, the first time when forces of India & the US served together on battle field.