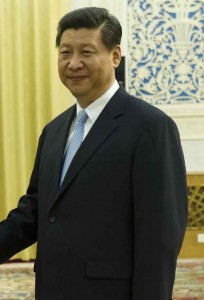 In his first visit abroad as the President of China since assuming office on March 14,2013, Mr.Xi Jinping is scheduled to visit Russia, Tanzania, South Africa and the Republic of Congo from March 22-30 and attend the fifth BRICS (Brazil, Russia, India, China and South Africa) summit on March 26-27 in Durban, South Africa. In the margins of the summit, he is scheduled to have bilateral talks with Prime Minister Dr.Manmohan Singh.

In addition to Xi’s views on the importance of BRICs as an economic co-operation organization, the Xinhua report as published by the PLA Daily highlights the views expressed by Xi on Sino-Indian relations.

…he talks of China’s “core concerns” vis-à-vis India and not core interests.

To quote from the Xinhua report as published by the PLA Daily:

“On Sino-Indian ties, Xi said, to jointly follow a path of peaceful development and development through cooperation not only meets the common interests of China and India, the two largest developing countries in the world, but also does a great service to Asia and the world at large.

“Speaking highly of the important headway in bilateral ties in recent years thanks to concerted efforts of the two sides, Xi urged both countries that are pursuing development at a faster pace to seize the opportunities and take solid steps to bolster cooperation and exchanges in all fields, accommodate each other’s core concerns and properly handle their problems and differences.

“On the boundary problem, Xi said it is a complex issue left from history, and solving the issue won’t be easy. But he said he believes “as long as we keep up our friendly consultations, we can eventually arrive at a fair, reasonable and mutually acceptable settlement.”

…the Chinese attitude on the border dispute with India has been less confrontational than their territorial sovereignty-related disputes with Japan and the ASEAN countries, particularly Vietnam.

Two significant points in his observations need to be underlined. Firstly, he talks of China’s “core concerns” vis-à-vis India and not core interests. Xi and other Chinese leaders talk of “core interests and major concerns” when they talk of China’s relations with the US, Japan and the ASEAN countries. When they talk of core interests and major concerns, they have in mind Taiwan and sovereignty issues relating to the islands in the South and East China Seas.

While Xi has not spelt out what are the core concerns of China vis-à-vis India, one could assess that these probably relate to the activities of the Government-in-exile of His Holiness the Dalai Lama from Indian territory, China’s sovereignty claims relating to Arunachal Pradesh and India’s strategic relations with Vietnam and Japan.

Of late, the Chinese have been accusing the Dalai Lama’s set-up of orchestrating the self-immolations in the Tibetan areas of China. It is likely that the reported revival of the activities of the Tibetan Youth League (TYC) and other pro-independence elements in the Tibetan diaspora in the West could be interpreted by Beijing as adding to its concerns.

Even though the Chinese have not openly taken up these issues, the likely impact of the Chinese concerns on this subject on our bilateral relations with China has to be continuously monitored and assessed.

On the question of China’s core concerns regarding India’s strategic relations with Vietnam and Japan, there is no reason for India to be defensive or apologetic about them.

China’s nuanced policy in matters relating to sovereignty disputes with India is evident from Xi’s recognition of the border issue as a complex problem on which the two countries should keep negotiating while maintaining peace and tranquility across the border and without allowing the dispute to affect the over-all development of the bilateral relations.

This is a formulation  with`  which India need have no quarrel. Neither India nor China has been transparent on the progress in the border talks. As a result, one does not know where the two countries are stuck up. The conventional belief is that the lack of progress is due to India’s opposition to China’s demand for the transfer of Tawang in Arunachal Pradesh to China.

In the absence of details regarding the present stage of the talks, there has been no contribution by the non-governmental community of analysts to the search for options to find a compromise solution. There is a need for the two Governments to be more forthcoming on the border talks so that the search for a compromise solution could be intensified. Ultimately, public and political opinion in India has to accept a border settlement .Keeping them in the picture will facilitate this. Since India too has accepted the principle of mutual accommodation, a compromise has to be found which will not seriously affect the national interests of the two countries. Why not the two Governments appoint a small core group of non-Governmental experts from the two countries to come up with alternate ideas that could be mutually acceptable?