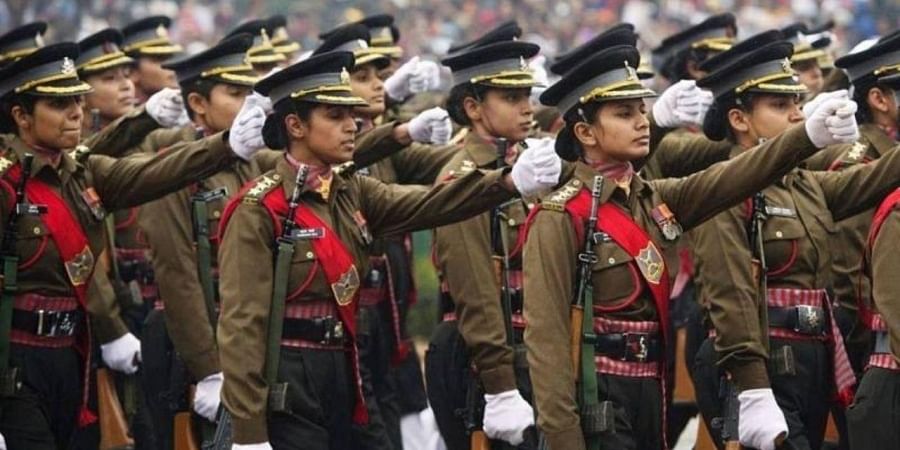 First time in history, six officers from the Indian army will attend the prestigious Defence Service Staff College (DSSC). Established in 1905, completing the course makes officers eligible for staff appointment in the higher formation of the Indian army and important foreign appointments.  It happens to be another positive development for women in the armed forces. Last year, Supreme Court in The Secretary, Ministry of Defence v. Babita Puniya & Others. Case granted a permanent commission for women officers in the armed forces. Also, in 2021, for the first time in history, the first batch of 83 women soldiers was inducted into the Corps of Military Police (CMP) in the Indian army. The attestation parade of newly recruited female soldiers held at CMP Centre and School at Bangalore after 61 weeks of intense training. Also, the army is planning to induct some 1700 in PBOR (Personnel Below Officer Rank) in CMP in a phased manner in the next 16-17 years.

Also, In August 2020, the women Officers of the Assam Rifles  were deployed in Kashmir.  Deployed at an altitude of 10,000 feet, at the Sadhana Pass, the women officers were tasked to search women passengers and check smuggling of narcotics, fake currency, and weapons through Sadhana Pass. The pass, 150 km northwest of Srinagar, connects the Tangdhar-Teetwal areas of North Kashmir to the rest of the Kashmir Valley.

History of Struggle, Implication of Development and Way Forward

Women have been long demanding gender equality in the armed forces. The nomination based on a merit list after a common competitive examination for Officers of the three Services these women officers will be adding another milestone for the full inclusion of women in the armed forces. Historically women were allowed in the armed forces only as Doctors Army Medical Corps (AMC) and Nurses in the Military Nursing Service (MNS). In fact, in 1958, the Army Medical Corps (AMC) became the first unit to grant regular commission to women. In 1992, women were allowed to serve in the armed forces as Short Service Commission (SCC) officers in various supporting branches. However, in 2008, the women officers in Judge Advocate General (JAG) and Army Education Corps (AEC) were given a permanent commission, and later in 2019, it was extended to eight more corps – Signals, Army Aviation, Army Air Defence, Army Service Corps, Electronics, Mechanical Engineers, Army Ordnance Corps, and Intelligence. Women are not allowed in any combat arms like Armoured Corps, Infantry, Mechanised Infantry, and Artillery.

The induction of women soldiers was a step closer to gender-inclusive armed forces and their inclusion in DSSC is a step closer for combat roles. The women in the Indian army have always been serving as commissioned officers, but with the coming of women soldiers, the force became more balanced than before. The women soldier has enhanced the capability of armed forces, especially in the areas of high insurgency like J&K and North East India. In such areas, women and children are often used to traffic drugs, narcotics, and weapons. Earlier, considering the sensitivity and religious sentiment of the local population, the women were generally exempted from frisking at check posts. With the deployment of women soldiers at checkpoints, the trafficking of drugs, narcotics, and weapons using women and children can be reduced drastically if not eliminated.

Further, the deployment of women soldiers is a big step in changing the stereotypical notion of society. Even the Supreme Court judgment in 2020 mentions ‘mindset’ four times and ‘Stereotype/Stereotypical’ five times. It indicates the impact of the patriarchal mindset on the induction of women in the armed forces.. Further, women in remote areas will gain confidence by seeing the women in uniform. It is crucial for germinating the morale of women, especially in rural areas.

Though the induction of women soldiers is a welcoming step, assigning the combat role to women is what the female fraternity is desiring. Many countries, including the USA, Britain, Canada, and Israel, assigned combat roles to women but considering them as complete combatants is still far from reality. Besides patriarchy and conservative mindset issues, other challenges need to be addressed before considering the induction of women in combat roles, particularly in the Indian Army. The induction of women in combat can not be an emotional decision for satisfying the aspiration of the women but shall be on the basis of merit. We need to understand the fact that male and female are physically different and imposing equality even in roles which are more suitable to males is nothing more than using the stage for photo opportunities. The scholar like Martin Van Creveld has emphasized the negative impact of inducting women into Israel defence forces (IDR) especially infantry.

First, it needs to understood that physical parameters are a genuine concern and need  to be factored in. Male, on average, is physically stronger than a female. An organization like the army, whose core requirement depends on physical parameters, cannot be compromised. Yes, in a sense, it is discriminatory that women are excluded from combat roles. They shall be given a chance on the same parameters and standards as that of men. If they can meet the standards, they shall be at the forefront of the battlefield. Also, it is a false notion that men soldiers are from rural backgrounds and are not schooled to accept female commanders. Male soldiers never hesitate to accept the female commander if she matches their physical standards. Thus, standards and capabilities are the real issues and not the induction of women in combat roles.

Here, the catchword is standards and shall not be compromised to meet the employment opportunities of some individual or group in any scenario. The combat operations are a matter of life and death, where national security is at stake. Only the best-suited soldiers shall be deployed, and if women are there, they shall be welcome with both arms. However, in a study conducted by the US Marine Corps examining women’s performance in the combat role. It was found that the male combatant group completely outperformed the mixed combatant group, including women in each aspect. Further, females have done exceptionally well in sports that require strict physical standards, but that is limited to competing against the fellow females only. In close intense duals, which is quite a possibility in India’s border with China and Pakistan, as happened during Galwan skirmish along LAC, the enemy will deploy female troops to maintain gender neutrality is quite negligible and less feasible.

Even if the woman meets the required qualification and standards, assigning the combat role to women will not lead to more freedom of equality but rather less equality. more violence and degradation of humanity. This is because both male and females are different and need to be understood rationally and not emotionally. By virtue of male’s mental and physical parameters they are best suited to be protectors whereas women are best suited to be policymakers and any other role that requires compassion and less aggression. Thus, women can be considered for non-kinetic, non-contact forms of conflicts.

Second, it is often argued that women have to deal with personal hygiene, motherhood, pregnancy, and gynaecological issues. An issue like this will affect the combat effectiveness of the army. True, these are genuine issues and can impact the operational readiness but can be resolved after the proper study and development of proper infrastructure. The aim of the army shall be of inclusion and not of exclusion. Some women choose not to go for motherhood and pregnancy. For those, the exclusion is discriminatory, and inclusion is a way to prove themself. However, during the combat operation, especially in the enemy territory, issues like hygiene and privacy for women can prove to be a liability. During peacetime, such infrastructure can be developed, but it can add further challenges to the already challenging environment during combat.

Third, the nature of warfare is changing, and future war will be less physical and more technological and psychological. In such scenarios, considering just a physical aspect of a soldier can be a dangerous trend. However, boots on the ground will always be a priority. Thus, considering the changing trend, women shall be allowed to serve as per operational requirements and suitability without compromising the standards at any cost. Women can contribute more in technology, intelligence, cyber, space, logistics, and training in the changing nature of warfare. The nature of future conflict can be the right stage for women to show their flair and grit as virtual combatants.

At last, two essential factors need to be considered before making any final commitment: first, ‘‘operational imperatives’ and second, ‘operational preparedness and individual aspiration’[1]. A comprehensive study on the subject involving these two parameters will translate into a more robust battle-ready force than just creating a ‘gender neutral’ but weak force.

In the 21st century, women are performing at par with their male counterparts. Even in some areas, females have outperformed males. However, combat operation is different and is a matter of life and death and has national security at stake. The challenges are there, but it does not mean they call for complete exemption of women from such roles. The objective shall be of inclusion, and the focus shall be on finding the way to utilize the women in combat that reflect their strength and not weakness. Also, we need to be more practical than emotional in imparting such a role to women.