Will Brutal repression by China in Tibet fail? 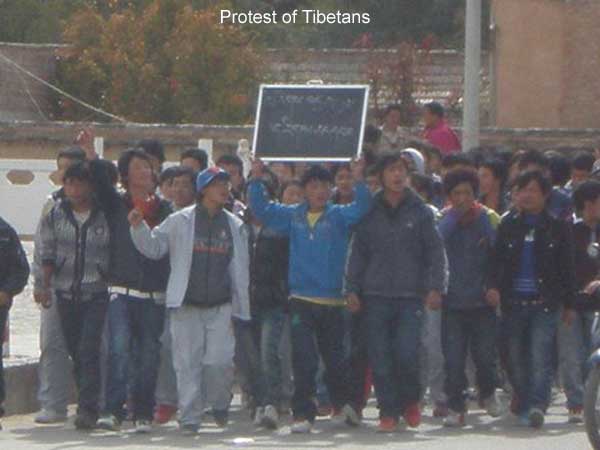 The Chinese recently took the CPC appointed Panchen Lama, who normally lives in Beijing under heavy security, on his annual one month, CPC-sponsored exposure to the Tibetan people. He camped in Lhasa under the protection of the PLA and was taken round the various monasteries where the influence of His Holiness the Dalai Lama continues to be strong.

…the Chinese have been trying to prevent news of the sermons and activities of His Holiness from reaching the Tibetans in China.

The Chinese hopes that the Tibetan people would start venerating the CPC-sponsored Panchen Lama were belied.His presence in the Tibet Autonomous Region (TAR) and his visits to the monasteries were tom-tomed by the Party and Government-controlled media. There was hardly any excitement in the Tibetan areas.

News of the sermons and travels of His Holiness the Dalai Lama outside Tibet in his political and religious exile evoke greater interest and greater excitement among the Tibetans in the TAR, Qinghai, Gansu, Sichuan and Yunnan than the sermons and activities of the Panchen Lama.

In desperation, the Chinese have been trying to prevent news of the sermons and activities of His Holiness from reaching the Tibetans in China. They have stopped allowing the re-entry of Tibetans who go to Nepal and India to attend the religious meetings of His Holiness.They are trying to find out how news about the happenings in the Tibetan areas travel to the outside world almost the same day and is broadcast by Radio Free Asia, the radio station funded by the US State Department.

The Internet has been censored and blocked.Mobile telephone services have been vigorously controlled. The Tibetans have been denied access to social media networks.Despite this, news continues to trickle out and trickle in. There is a two-way trickle which the Chinese intelligence agencies have not been able to identify and stop.

The recent arrests in the Lhasa region were meant to stifle the Lhakar movement. The Chinese have not succeeded.

The chain of self-immolations continues—mostly in the Tibetan areas of Sichuan, but increasingly in Qinghai and Gansu too. The total number of fatal self-immolations since March of last year crossed 50 last week.The Chinese do not know how to stop it. Their intelligence agencies have not been able to profile Tibetans who are likely to commit self-immolation.

There has been no flow of intelligence from the Tibetan community about plans for self-immolation. Arrests and severe punishments to Tibetan bystanders who do not stop the self-immolation attempts have not worked.

There have been more raids and more arrests.The Kirti monastery of Sichuan, where the self-immolations started last year, was raided once again last week and the monk inmates subjected to intimidatoryquestioning.The Zilkar monastery in the Qinghai province was raided on September 1 and four of the monks there were taken away for custodial interrogation.

The Chinese are confused. Despite their denying the Tibetans easy access to modern means of communication,news continues to travel and travel fast. There have been reports of large-scale preventive arrests in the Lhasa region. The trouble has till now been confined to the Tibetan areas of Sichuan, Qinghai and Gansu. The Tibetan areas of Sichuan continue to be the epicentre of the wave of self-immolations.

Despite their most brutal suppression, the Chinese have not been able to destroy the pride and hopes that continue to drive the movement.

Though the TAR has not yet been affected in a big way by the self-immolation movement,it is becoming the epi-centre of the Gandhian type satyagraha practised by the Lakhar movement, which is a Tibetan self-identity movement which tells the people: Be Tibetan,Eat Tibetan, Dress Tibetan, Speak Tibetan, Live Tibetan, venerate His Holiness the Dalai Lama.

The recent arrests in the Lhasa region were meant to stifle the Lhakar movement. The Chinese have not succeeded.

It is a new type of protest movement, the like of which Tibet has not seen before.Self-motivated, self-induced, self-driven with no identifiable leaders and organisational structure behind it. It is kept sustained not by anger but by the pride of the Tibetans in themselves, their culture, their religion, their traditions, their heritage, their guru.

Despite their most brutal suppression, the Chinese have not been able to destroy the pride and hopes that continue to drive the movement. Today, the odds seem heavily against the Tibetans.

So they did against Mahatma Gandhi in the 1920s and against Nelson Mandela in the 1970s and the early 1980s. And then the odds turned in their favour.Brutal suppression failed to prevail.

Can history repeat itself in the Tibetan areas of China?

2 thoughts on “Will Brutal repression by China in Tibet fail?”