Why our Bengal is so Important for The Indian Republic 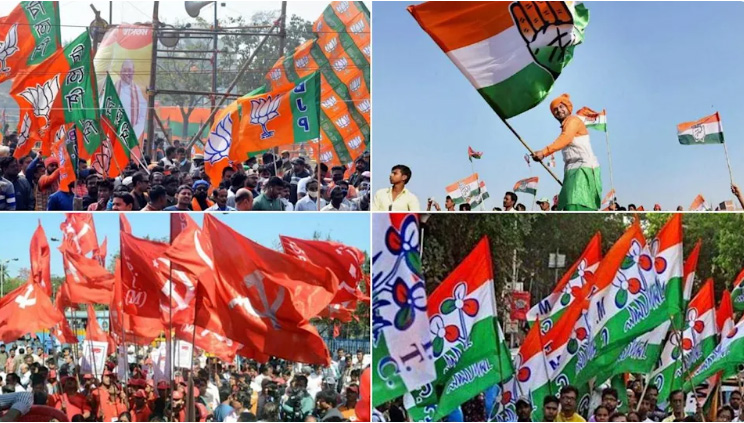 It is very likely that the final results of the latest State-level elections in West Bengal will be available soon after this essay is published. The actual election process lasted more than a month and was preceded of course, by almost a year of vigorous (and very often violent) campaigning by the two main electoral alliances. No quarter was asked and none given in this murderous interlude in Indian politics.

The statutory Central Election Commission (CEC), along with its local West Bengal subordinate affiliate, drew flak from all the contenders, and was indeed guilty of numerous sins of omission and commission. Some of them were undoubtedly grievous, although corrective action was taken in many cases. This was done largely because of the public nature of the elections and also because of the power and capability of contemporary information technology.

However, I must clarify that it is not part of the remit of this essay of mine to go into these contentious issues. What I propose to do is to study the critical importance of this election for the Indian Republic as a whole and also for our ancient Indic civilisation. Needless to say, I pen these thoughts not as a Bengali (even an expat one, or a probashi as they say in the Bangla language). To be a member of the homo sapiens group is a valid enough justification.

Good old Byron is the prototype of the person who justified this present intervention of mine when he penned his immortal lines in praise of a fallen and defeated Greece, the cradle of ancient European civilisation:

The mountains look on Marathon—
And Marathon looks on the sea;
And musing there an hour alone,
I dream’d that Greece might still be free;
For standing on the Persians’ grave,
I could not deem myself a slave.

In our shores also, we have had powerful and epic poems, songs and essays to honour our ancient and glorious past, that was nearly swept away from the human pantheon by successive hordes of invaders from our west. Many of these poems and songs were Bengal’s gift to the rest of India.

Apart from our two national songs, Vande Mataram and Jana Gana Mana, these immortal songs and poems are not even known to the vast majority of our fellow citizens. The one song that resonated with freedom fighters during the first four decades of the last century was Atul Prasad Sen’s moving paean to India’s revival.

Atul Prasad, like many of his fellow-Bangla professionals, lived for a number of  years in Lucknow, where he composed some of his memorable hymns. The main one was  “Bolo bolo bolo shobey, shoto beena benu robey”. Roughly translated into English, it asks the country’s populace to sing in the company of a hundred veenas about the impending rise of India and its return to the centre stage of the world assembly. This resurgent Bharat would be great in religion as well as in deeds,  and when the new day dawns, the old would also rise again.

The contribution of undivided Bengal to the Indian freedom struggle was unparalleled. The number of freedom-fighters and revolutionaries from Bengal who were imprisoned in the notorious Cellular Jail in the Andamans was disproportionately much  more than those from the Punjab, UP and Bombay Presidency. (http://db.and.nic.in/cellularjail/Stories/NameList.htm)

In a recent disclosure to the Rajya Sabha on the 9th July 2019, the Minister of State for Culture confirmed that 585 revolutionary prisoners were sent to the Andamans between 1909 and 1938, when the British shut down the Cellular Jail. Out of these 585 freedom fighters, no less than 398 were from undivided Bengal. This gives yet another indication of what Bengal gave to the rest of the nation(Government of India, Ministry of Culture, Unstarred Question no. 1756, answered in the Rajya Sabha by the Minister of State for Culture)

In the overall history of the Indian freedom movement, the contribution of undivided Bengal has been assessed in great depth in another study that I found to be most perceptive, because it contains a wealth of data and information. Authored by S. S. Shanmukh and Dikgaj, this piece of research published in 2019 is both empathetic and rigorous.(http://indiafacts.org/a-historical-defense-for-the-citizenship-amendment-bill-hindu-bengals-contribution-to-india/)

The readers will pardon me for providing this detailed historical canvas, since it shows how important Bengal (now dismembered as West Bengal) is for India, even after it has been reduced to a shadow of its former self. This is because Bengal’s intrinsic attributes will always be of immense value for the rest of the Indian Republic. The rest of this essay will concentrate on this theme.

The following are the parameters, not necessarily in any order of importance, that define the umbilical links between the two entities. The terms West Bengal and Bengal will be used interchangeably hereafter. Its eastern neighbour will (correctly) be referred to as Bangladesh. The first characteristic of our Bengal is its location. It is the gateway to India’s northern neighbours, a number of north-east Indian states, the Bay of Bengal and the Indian Ocean. The international country groupings of ASEAN and BIMSTEC are logically the strategic backyards of our Bengal.

We should now look at the major changes that have taken place in West Bengal in recent times under different political dispensations. The starkest change that this state has seen is in its demographic composition. The 2011 Census figures on religious affiliation of India’s population composition were not put up in the public domain till the 2104 national elections were concluded.  In the case of West Bengal, the figures were as follows :

The decennial changes in the Muslim population of our Bengal from 1961 was as follows:

The figures speak for themselves and the readers will be able to grasp the implications of these changes. The only observation that needs to be made is that this change took place under the Congress as well as the Left Front regimes. The TMC’s track-record will only be available after the 2021 Census results are disclosed and that may take another five years or so.

However, a quick summary of Bengal’s demographics will show that in three districts, namely, Murshidabad, Malda and North Dinajpur (all of which are border districts), Muslims outnumber Hindus. Also, in India as a whole, the growth in the Muslim population between 2001 and 2011 was 0.8%, but in West Bengal it was 1.76% (more than double).

On the economic and industrial front, West Bengal’s performance was equally dismal. According to the Economic Survey of 2020-2021, this was how the state performed in recent times.

It must be emphasised that the economic powerhouses like Maharashtra, Gujarat, Tamil Nadu and Karnataka notched up growth rates of 6.88, 9.83, 7.12 and 8.79 % respectively. We should also note that these States recorded these growth rates at base levels that were considerably higher than that of West Bengal. Readers will undoubtedly observe that the period 2012-2019 was one when West Bengal was continuously under the rule of the TMC and Ms. Mamata Banerjee.

What are the other legacies of the current ruling dispensation of our Bengal? The saga of overwhelming corruption and graft of this coterie during the last 10 years is something that all readers of this essay will recall. Scams and scandals like Saradha Chit Fund, the Coal Scam and other ignominious episodes need hardly be recounted in this essay, since they have been extensively documented in the national media. However, as a footnote one should also remember the hilarious episode when the TMC leader’s attempt to award herself a Ph.D. from a non-existent American “university” boomeranged a few years ago. (https://tfipost.com/2021/01/get-over-nidhi-razdans-fake-harvard-job-mamata-banerjee-has-a-phd-from-a-fake-american-university/)

To wrap up this essay, all of us should deeply introspect whether our Bengal, with all its heritage, immensely valuable patrimony and strategic importance, should be allowed to be ruled and misruled by  forces that are manifestly venal and dangerous. The Bengali psyche has been so corrupted and distorted by powerful and insidious elements in the last few decades that it should not be surprising to see the same viral elements being returned to power in the next few days.

Will India ever be able to repent appropriately if this happens?