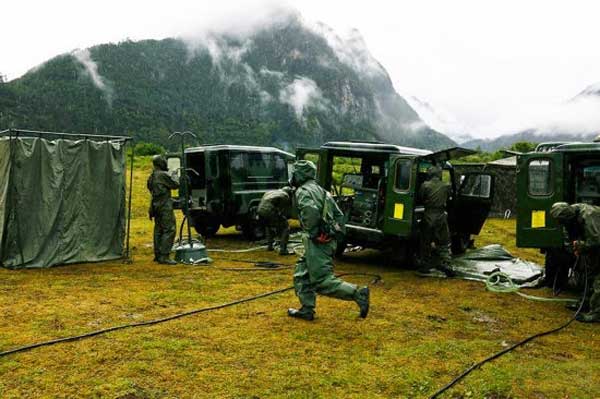 Despite the fact that the Chinese propaganda machinery is relentlessly working to make the world believe that the people in Tibet are the happiest on the planet, Beijing is nervous, very nervous.

Just a glance at the situation in Tibet and Xinjiang shows that Xi Jinping is not fully controlling ‘his minorities’ areas.

Looking at the situation in Tibet, one clearly see that Beijing fears a reaction from the Tibetan population, who are supposed to have been ‘liberated’ 70 years ago by Mao’s troops.

The fifteen activities prohibited at the border include ‘entering the border management zone without valid documents, evading border inspection, organising or helping others to be smuggled across the border, and hunting or collecting national protected rare animals and plants, etc.’

The circular added: ‘The bans also prohibit private small aircraft flight activities, damaging or moving of communications and water facilities, moving of markers that mark the location of the border, and damaging of military facilities. …Anyone who violates these prohibitions will be held accountable according to law.’

The message is clear.

The Global Times observed that at the Seventh Tibet Work Forum in August 2020, Beijing called for efforts ‘to ensure national security and enduring peace and stability, steadily improve people’s lives, maintain a good environment, solidify border defense and ensure frontier security. …the emphasis on the 15 border prohibitions can further implement this approach.’

It was stressed that carrying or disseminating newspapers, books or electronic products containing content that endangers national security and undermines ethnic unity is strictly prohibited.”

It is rather drastic. These measure will undoubtedly alienate the Tibetans further.

What is causing such fear?

China is supposed to be the second most powerful nation of the planet. Isn’t it? What does it fear so much from India?

The reason mentioned is the relation that the Himalayan populations in India could be having with the Tibetans in Tibet? This does not make sense, as there is presently hardly any contact between the two.

The Global Times also speaks of ‘criminal activities along the borders’.

Here too it does not make sense as the Himalayan states are not touched presently by the pandemic. Arunachal Pradesh and Sikkim are the safest states in India, with hardly any cases.

It is also said that in recent years, ‘the region has also been infiltrated by some foreign forces.’

With the monitoring system in place on the plateau, it is not easy for ‘foreign forces’ (read Indian) to infiltrate; it is in fact impossible.

She argues that it might be ‘to prevent exiled Tibetans trying to infiltrate Chinese borders. …More than 10,000 exiled Tibetan were being trained as ‘special operation troops’ by India.’

Here again it is not serious.

Last month, a notice from the Metok Border Management Brigade announced that from March 1, the Chinese authorities began ‘to check border pass, ID cards and other documents of people entering and exiting Metok.’

Metok is the last small, but strategic town located near the Great Bend of the Yarlung Tsangpo, north of the McMahon Line. Let us remember that the river becomes the Siang on entering Arunachal and later the Brahmaputra in Assam (and the Meghna in Bangladesh).

The notice says that the entire Metok county had been placed under ‘border management’ and the area was thereafter restricted: ‘People entering and leaving must comply with the relevant regulations of the border management area and need to show relevant documents at border checkpoints to be allowed to pass.’ Even the People’s Liberation Army was not exempted from these new restrictions.

This might have been due to the construction of a new access road, which comes dangerously close to the Indian border, via the Doshong-la tunnel.

The 70th anniversary of the 17-Point Agreement

The main reason is briefly mentioned by The Global Times: ‘Tibet is about to celebrate the 70th anniversary of its liberation, it is necessary to take appropriate precautions.’

The grandiose celebrations will take place on May 23 and in July, Tibet will ‘celebrate’ again, this time the 100th anniversary of the Communist Party of China. But each and every Tibetan knows that Tibet was not liberated in 1951. China fears that the propaganda will be busted like a balloon.

The truth is that seventy years ago, a Tibetan delegation led by Ngabo Ngawang Jigme, a prisoner of war and former governor of Kham, was forced to sign ‘under duress’ a Seventeen-Point Agreement in Beijing.

Since then, Tibet has become a colony of China and the Tibetans are second-class citizens in their own country.

In his memoirs Freedom in Exile, the Dalai Lama vividly recalls these dramatic events: ‘The idea of Tibet ‘returning to the Motherland’ was shameless invention. Tibet had never been part of China. In fact, Tibet has ancient claims to large parts of China. On top of which, our respective peoples are ethnically and racially distinct. We do not speak the same language, nor is our script anything like the Chinese script.’

The Dalai Lama concluded: ‘The details of the Seventeen-Point ‘Agreement’ were chilling all the same.’

The truth is that Tibet was not liberated; it was a free nation.

The Tibetan nation still lives under the yoke of the Chinese Communist Party, and Beijing today has a guilty conscience; this creates a great uneasiness for Xi Jinping and his colleagues; this explains the repressive measures on the border.

Also plausible is the fact that the PLA could be planning to open a new front against India to celebrate the ‘liberation’ of Tibet and the 100th anniversary of the Communist party. Having failed to make inroads in Ladakh, the PLA could try again on the Eastern front. The situation should be watched closely by the Indian government.

The Caixin, which broke the news, said: ‘The specific position is yet to be announced’, though he can only have become the XMD Commander.

Wang has now reached the capital of the restive province to take over his new job; it will give him over-all command over the Ladakh front against India, which reports to the South Xinjiang MD (or SXMD), based in Kashgar.

Wang Haijiang, a native of Anyue, Sichuan, born July 1963, must have pleased his bosses in Beijing (read Xi Jinping) during his tenure in the TMD.

This important change comes at a time when the 11th round of talks between the 14 Corps Commander based in Leh and Major General Liu Lin, the commander of the SXMD, was scheduled to take place on the banks of the Pangong lake.

While no significant progress was made on the disengagement on the front, the name the successor of Lieutenant General Wang Haijiang in the TMD popped up on some Chinese Web sites: it is Lieutenant General Wang Kai who previously served as one of the deputy commanders of the Western Theater Command. On his transfer to Lhasa, he was immediately promoted lieutenant general.

All this is ominous for the Indian northern borders and the people of Tibet.