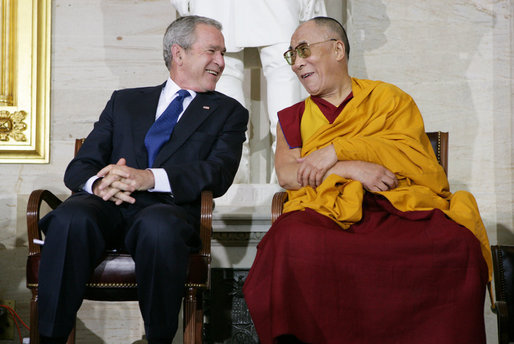 On 20 November, the Central Tibetan Administration (CTA) proudly announced that its Sikyong (president), Lobsang Sangay, had entered the White House. Dharamsala called it “a historic feat”, the first time that the CTA head was invited into the White House. In November, Sangay had already been invited to the State Department to meet Robert Destro, the Special Coordinator for Tibetan Issues. The fact that the building was not the White House, but the Eisenhower Executive Building next door is just a detail.

Whether it amounts to a virtual recognition of the Tibetan government or not can be argued. It is, however, certain that the outgoing US President, who will soon leave his job (and his house), is keen to put his successor in front of as many fait-accomplis as possible.

Whether the visit ‘next-door’ is a positive development for Tibet or not, only the future will tell. However, one wishes that the South Block would start meeting regularly with the Dalai Lama and the CTA officials. It would certainly be far more meaningful for the future of Tibet (even if Dharamsala does not realise this). Why was the visit of Foreign Secretary Harsh Vardhan Shringla to Dharamsala in July kept hush-hush and local journalists asked to not publish any photos? Why so much unnecessary discretion?

Interestingly, a few days before Sangay’s visit to the White House, the US House of Representatives passed a resolution (H. Res. 697): “Affirming the significance of the advocacy for genuine autonomy for Tibetans in the People’s Republic of China and the work His Holiness the 14th Dalai Lama has done to promote global peace, harmony, and understanding.” Among other things, the Resolution said that “it would be beneficial to convene a bipartisan, bicameral forum… between Members of Congress and His Holiness the Dalai Lama to discuss peaceful solutions to international conflicts”. On 18 November, during the debate, Representative Ted Yoho also strongly criticised Beijing for violating the Tibetans’ religious freedom: “the CCP sees Tibet culture and religious heritage as a threat to its control”.

Some parts of the US legislation should trigger a re-thinking of India’s Tibet policy (not sure if Delhi has one!). Take the example of the US Statement of Policy on Reincarnation of Dalai Lama: “The wishes of the 14th Dalai Lama, including any written instructions, should play a determinative role in the selection, education, and veneration of a future 15th Dalai Lama.” Why can’t South Block simply state that it will support all the decisions taken by the Dalai Lama in the matter of his reincarnation and will welcome the 15th Dalai Lama as an honoured guest of India, like the present pontiff has been since 1959. It is not necessary to go into details like the US Resolution does.

Then, regarding the preservation of the Tibetan plateau’s environment and water resources, the US bill “recognises the key role of Tibetan plateau as it contains glaciers, rivers, grasslands, and other geographical and ecological features that are crucial for supporting vegetation growth and biodiversity, regulating water flow and supply for an estimated 1.8 billion people.” America is far away, but it is India which will suffer the brunt of the climate change on the Third Pole and the intensive damming on the Roof of the World. It is a great pity that Delhi keeps mum on the subject.

The US appointment of a Special Coordinator for Tibetan Issues is worth thinking about for India, though the post should be more holistic in its definition and the officer should be able to deal with not only the Ministry of External Affairs, but also the Ministries of Home Affairs, Culture, Education or Defence in order to coordinate a new Tibetan policy.

Section 618 of the US legislation speaks of ‘Diplomatic representation relating to Tibet’: “The Secretary [of State] should seek to establish a United States consulate in Lhasa, Tibet”. The rationale is given: “(1) to provide consular services to United States citizens traveling in Tibet; and (2) to monitor political, economic, and cultural developments in Tibet.” It is crucial for India to have a similar policy.

In 1947, India inherited from the British a full-fledged mission in Lhasa. An ICS officer, Hugh Richardson, served as the first head of the Indian mission, but was replaced in August 1950 by a bright young Chinese-speaking IFS officer, Sumul Sinha. Unfortunately (and unwisely), the Prime Minister discreetly downgraded the Mission into a Consulate General in 1952. Thereafter, it remained so till December 1962, when, for unknown reasons, South Block decided to close it down. I have spent several years trying to find out why it was closed, but I have no answer till date. Maybe foolishness and panic were the causes for it.

The fact that the Ministry of External Affairs keeps the history of the crucial two years before the Sino-Indian conflict inaccessible to the Indian public does not help understand what really happened in the months preceding October 1962. For example, who in India knows that the Indian Consul General in Lhasa was practically kept under house-arrest for thirteen months before and during the border war and that there was no retaliation or even complaint from the Government of India? Another example is how the last Indian Consul could not even visit the Potala during his tenure in Lhasa. The reasons mentioned by Dr P.K. Banerjee — that the Chinese Consulates in Mumbai and Kolkata were causing problems — can’t be taken seriously.

The presence of an Indian Consul General in Lhasa could have helped to accelerate the process of the repatriation of the nearly 4,000 Indian PoWs, or, at least, put some pressure on the Chinese Government to release them. But was Delhi even interested?

Decades later, India tried to reopen the Lhasa Consulate, but in vain. In the 2000s, Shivshankar Menon, who served as Ambassador in Beijing and Foreign Secretary, is said to have played a pivotal role in this effort, but it is obvious that it was easier to hurriedly close the mission in December 1962, than to reopen it. Incidentally, Nepal still has a representative in Lhasa today.

Without copying the US, this is something that Delhi should insist on. It is India’s legitimate right due its old cultural, religious, sentimental affinity with the Land of Snows.

3 thoughts on “Why India needs to Rethink its Tibet Policy, if there’s one”