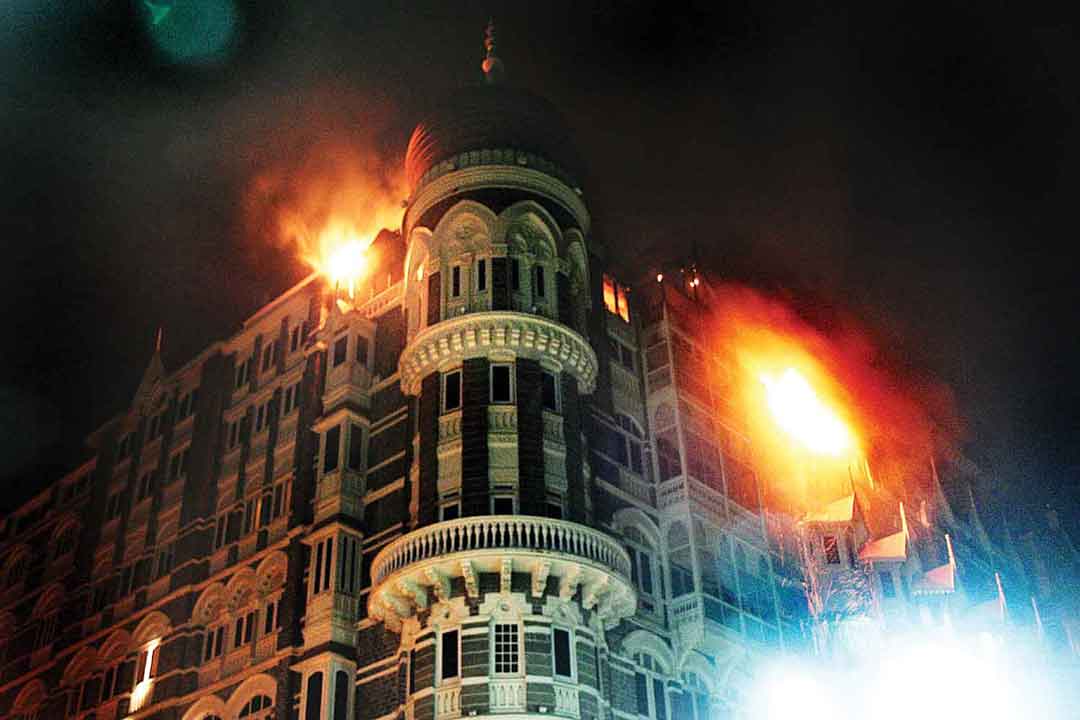 The 14th anniversary of the gruesome Mumbai terror attacks has gone by without its perpetrators being brought to justice. Those massacred belonged to many nationalities, including 6 Americans, yet Pakistan has escaped international pressure to try those involved in planning and committing this heinous crime. A Pakistani, Ajmal Kasab, was caught, tried and hanged, providing proof of Pakistani complicity. India was counselled, as usual, to show restraint and not retaliate by the US, the EU and Russia too, because of concerns of a conflict between two nuclear powers.

It is ironical that the nuclear overhang is not a matter of concern today when a proxy war in Ukraine is being openly conducted by the world’s pre-eminent nuclear war, the US, against Russia, a peer nuclear power, seemingly unmindful of it potentially escalating to a nuclear level. Ukraine’s leader has asked for a pre-emptive nuclear strike against Russia, without causing a public storm in the West. There is loose talk in the West about Russia using tactical nuclear weapons in Ukraine as a viable option.  The nuclear plant at Zaporizhzhia is being shelled, raising the possibility of nuclear contamination, but Ukraine is being sheltered from any responsibility by the West as not doing so would compel a change in the present narrative that paints Putin as the unqualified villain and Zelensky as the unvarnished hero.

Under the cloak of nuclear-related concerns the West has sought to dissuade India from reacting strongly to Pakistan’s terrorist attacks and give a protective cover to that country as a result of a historical bias in its favour and continuing geopolitical interests there. The West has always pushed for dialogue to resolve all outstanding issues between the two countries. For long, the West, without saying so too openly, has viewed Pakistan’s use of terrorism as a consequence of the unresolved Kashmir issue, implying that it had a cause. This was a way to obfuscate the terrorism issue, give it some “legitimacy” by linking it to the Kashmir issue, on which the West still equivocates.

This is apparent from the statements by German Foreign Minister Baerbok in June and October this year in the company of her Pakistani counterpart to the effect that the UN must ensure human rights in Kashmir and that Germany had a role and responsibility in addressing the Kashmir issue with the involvement of the UN. More recently, the UK Minister of State in the Foreign Office in a debate initiated by a Pakistani origin peer in the House of Lords said that the Kashmir issue should be resolved between India and Pakistan “taking into account the wishes of the Kashmiri people”. This are code words for self-determination, implying that the issue of sovereignty over Kashmir is still open. Aware that Pakistan Occupied Kashmir has been the staging ground for Pakistani terrorism against India, the US ambassador to Pakistan recently visited what he called “Azad Kashmir”.

– US Ambassador to Pakistan visited PoK on Oct 7.

– German FM says that Germany has a role with regard to Kashmir, calls for UN intervention & advises India to follow UN.

– West led by US is targeting India now for refusing to toe the line.pic.twitter.com/e34xGGw04Q

In the case of the US, its war on terror in our region has been full of contradictions and compromises. After the 9/11 terrorist attacks on its soil the US attacked Afghanistan and ousted the Taliban government. It acknowledged but overlooked the safe havens and support Pakistan gave to the Taliban in its bid to take over power in Afghanistan with the liberal use of the arm of terrorism. Eventually, with Pakistan’s assistance the Americans entered into negotiations with the very Taliban that they had ousted years earlier, unchanged in their Islamist ideology and practices. The US, despite its global combat against Al Qaida, preferred to overlook the fact that Pakistan had sheltered Osama bin Laden for several years. The US had called the Haqqani group as a veritable arm of the ISI and now that group is in charge of the security in Kabul. The decision by the US to grant $450 million to Pakistan to upgrade its F 16s for counter-terrorism purposes – which our External Affairs Minister has dismissed as a valid explanation- indicates the complexity of the challenge India faces from Pakistan’s terrorist affiliations.

The Indian government in power when 26/11 occurred not only shied away from imposing a deserving cost on Pakistan, it resumed the comprehensive dialogue with it after a few months, showing weakness in signaling that it saw no choice but to engage Pakistan. This emboldened Pakistan to conduct more terrorist attacks against India in the following years, which continued till the present government, which initially also explored the possibility of reaching some understanding with Pakistan on abjuring terrorism as a weapon against India, but then conducted surgical strikes inside Pok after the Uri attack and after Pulwama inside Pakistan as a warning that India would henceforth retaliate forcefully against any terrorist attacks.

A rickshaw puller convinced the militants that he was an ISI operative, who had been sent by Pakistan to help Khalistan cause.

Rickshaw puller was none other than Ajit Doval undercover.

He gathered all important info by entering inside Golden Temple pic.twitter.com/84wqdGjL3K

India has since then pursued a pro-active policy in raising its concerns about terrorism bilaterally with partners and in all multilateral forums, with some gains as the phrase “cross border terrorism” has figured in our joint statements with many countries, and LeT, JeM, HuM and other jihadi organisations have been identified as terrorist organisations. Some have been included in the UN list of terrorists, but some key figures have not been because of China’s obstructionism. China, which never condemned the 2008 Mumbai attacks, protects Pakistan on the issue of terrorism by lauding its combat against it and incurring costs as a result.

Through the Financial Action Task Force (FATF), which sets standards and seeks to promote effective implementation of legal, regulatory and operational measures for combating money laundering, terrorist financing etc, Pakistan has been subjected to pressure by its inclusion in the grey list of countries that do not adequately comply with these standards and measures. In its precarious financial situation when it needs IMF financing etc, it has been compelled to satisfy the FATF on several parameters for meriting removal from the grey list. It has jailed Hafiz Saeed and some others for terror financing but not for 26/11, which means that he and others have escaped trial for master minding the Mumbai attacks, a trial that would have revealed the identity of all those in the Pakistan establishment involved in them. Pakistan has thus escaped real accountability.

In October, Pakistan was removed form the grey list. India reminded the global community that it was in its interest that Pakistan continued to take credible, verifiable, irreversible and sustained action against terrorism and terror financing emanating from territories under its control. Pakistan has been on the FATF’s grey list twice before and was removed despite maintaining its terrorist infrastructure. With the radicalisation that has occurred in Pakistan, visible in the street power of the Islamist groups that the political establishment has not been able to handle without compromises, and which is now being mobilised by Imran Khan, it would be a leap of faith to believe that the extremist groups well integrated with the society at large in Pakistan would give up their vocation for jihad and not raise funds for that purpose.

"…As a result of FATF scrutiny, Pakistan has been forced to take some action against well-known terrorists, including those involved in attacks against the entire international community in Mumbai on 26/11..," Ministry of External Affairs (MEA) spokesperson Arindam Bagchi says. pic.twitter.com/VwWv7EobxZ

With India still serving its term on it, the UN Security Council held a Special Meeting of its Counter Terrorism Committee in India on October 28/29. India did well to expose the Committee to the 26/11 attacks in a programme in Mumbai, including exchanges with those that lived through that horror. It reminded the Committee members  of the need to bring to justice the perpetrators who remain protected and unpunished (a reference to Pakistan), as well as the inability of the UN to act in some cases because of political considerations ( a reference to China). India conveyed a message on issues that still need addressing: terrorism still gets the necessary financial resources to thrive, UN efforts need to be coordinated with the FATF and the Egmont Group, the Security Council sanctions regime should function transparently and effectively on the listing of terrorist groups etc.

The iconic horseshoe in Mumbai.

A rare occasion when the UN Security Council meets outside New York.

Informal Briefing of the Counter-Terrorism Committee gets underway. pic.twitter.com/56S9QHYj8p

India rightly drew attention to the misuse of the emerging technologies by non-state actors and “lone wolf attackers” for terrorism purposes. These have thrown up new challenges for the governments and regulatory bodies. The internet and social media platforms have become potent instruments in the toolkit of terrorist groups along with the use of unmanned aerial systems against strategic infrastructure and commercial assets. In Punjab we have seen Pakistan using drones to drop weapons and drugs across the border. The Delhi Declaration of October 29 expresses these concerns in the context of the need to counter the use of new and emerging technologies for terrorist purposes.

A historic and successful Special Meeting of the UN Security Council’s Counter-Terrorism Committee over 2 days in Mumbai and Delhi comes to a close.

This was the first time the UNSC convened in India in any format. pic.twitter.com/A7EidoX7o1

The cause of justice in the case of 26/11 was not served by India itself by resuming our dialogue with Pakistan despite those abominable attacks, the conspiracy theories that sections of our political class in India built around what happened, the equivocation of the West on taking Pakistan to task for its own geopolitical interests and the fact that India itself seemed reconciled to what it suffered by re-engaging Pakistan, and China’s double dealing on terrorism issues in support of Pakistan.

India is doing well, however, to keep drawing the attention of the international community to the threat of terrorism, even as Pakistan seems off the hook on the issue with its changed ties with the US, outreach to it by Russia and support of China, and with the “war on terror” now off the US agenda. India remains vulnerable with Pakistan and a Talibanised Afghanistan next door, not to mention the emergence of the Islamic State elements there. By maintaining the focus on terrorism India is indirectly maintaining pressure on Pakistan to contain its terrorist proclivities.