Why did Xi meet PLA Generals? 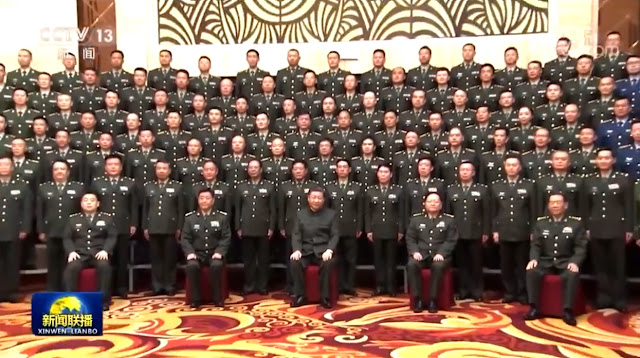 On June 22 and 23, Xi Jinping, General Secretary of the Communist Party of China (CPC) visited Lhasa after a gap of ten years. A day before, the Chinese president went to Nyingchi City (previously called Prefecture), near the Indian border of Arunachal Pradesh.

The China Daily reported: “he was warmly welcomed by local people and officials of various ethnic groups. …He then visited the Nyang River Bridge, to inspect the ecological preservation in the basin of the Yarlung Tsangpo River [Brahmaputra] and its tributary Nyang River.”

This is an important part of the two-day visit (June 21 to 23) as far as India is concerned.

For China, it has to be seen in the context of the CPC’s 100th anniversary and the 70 anniversary of the so-called Liberation of Tibet (read ‘invasion’). The ‘Op Bakhor’, as we shall see, was certainly part of the ‘celebrations’, even if fully stage-managed.

Later The People’s Daily stated the objectives of the visit: “to implement the party’s strategy for governing Tibet in the new era and write a new chapter in long-term stability and high-quality development of the snow-covered plateau.” This refers to the 7th Work Forum held in August 2020 which defined the development policies for Tibet for the five next years, particularly the sinicization of Tibetan Buddhism.

When I heard about Xi’s tour of Tibet, the ‘best’ visit of a Secretary General in Tibet immediately comes to mind.

From May 22 to May 31, 1980; Hu Yaobang went on an in-depth and honest inspection tour of Central Tibet. A Chinese report later explained: “it can be said that this event marked the beginning of a new era for the CPC’s Tibet policy. In the ten years that followed that visit history marched on with its strong steps, leaving behind impressive footprints: amongst them, indisputably, the open door, a revitalised economy, changes in the social structure and an improvement in people’s lives.”

Unfortunately, it did not to last.

Wan Li, member of the Central Committee and Vice-Premier of the State Council, thus described Hu’s tour: “The choice of date pointed out that the Central Government was willing to settle matters through consultation with the local people. …it aimed to show the Central Government’s wish to restore the harmonious atmosphere of cooperation which had prevailed in the early 1950s.”

On May 29, Hu Yaobang made a ‘passionate’ political speech at a gathering of 5,000 cadres in Lhasa; the slogan put forward in the speech was ‘Strive to build a united, prosperous and civilised new Tibet.”

In the speech Hu listed six tasks facing Tibet, the first point was that Tibet should “exercise nationality autonomy in the region fully – that is to say, to let Tibetans really be the masters of their own lives.”

Unfortunately, this would never be followed, as the hard-liners soon prevailed.

Post-Tiananmen massacre, Jiang Zemin became the General Secretary and towards the end of July 1990, Jiang, accompanied by the PLA Chief of General Staff, Gen Chi Haotian, paid the ‘highest-level visit to the Tibet Autonomous Region (TAR) in a decade’ (incidentally, Gen Chi was responsible for the repression on the Tiananmen Square in June 1989).

They promised new economic incentives for Tibetans and urged continued vigilance against pro-independence activities. However, Jiang Zemin did not echo Hu Yaobang’s views in 1990: “It is necessary to strengthen education in patriotism and socialism in the light of conditions in China and Tibet, so as to make the students know from childhood that Tibet is an inalienable sacred part of the big family of the motherland, and that there will be no socialist new Tibet if there is no CCP.”

It appears that during Jiang Zemin’s visit to Tibet, a close relationship was established between the general secretary and his future protégé, Hu Jintao.

From the end of the 1980s, Hu Jintao, the future General Secretary has been serving as Party boss in Lhasa, though he did not like Tibet at all.

There was a well known anecdote about Hu amongst Tibetan cadres: ‘Where is Hu?’ The answer was: ‘Hu is in Beijing Hospital.’ ‘Why?’ Because, Hu would report sick each time he had to go to Lhasa!

Xi Jinping, who succeeded Hu (Junior) in 2012, had visited Tibet as Vice-President in 2011; the present tour was therefore his first in Central Tibet in nearly a decade.

However less than two months ago, the Chinese President went to Gangcha County in Haibei Tibetan Autonomous Prefecture in Qinghai Province. The area is mainly inhabited by Tibetans and Mongols.

According to Xinhua: “Xi was briefed about the environmental protection efforts in the Qilian Mountains and Qinghai (Kokonor) Lake. At the lake, he inspected achievements made in comprehensively addressing environmental problems and protecting biodiversity.”

Later, Xi visited a Tibetan settlement in Shaliuhe Township “to learn about the lives of local Tibetan residents.” It was mainly a promotion tour for him; one could even hear Xi saying ‘Tashi Delek’ (‘namaste’ in Tibetan).

The Visit in Central Tibet

The present visit is therefore the second tour of Tibetan-inhabited area in the last two months. I list below some important implications of the Lhasa-Nyingchi visit:

It was certainly an important visit, and the policies/decisions taken in August during the 7th Work Forum will be implemented with more vigor after Xi’s visit. It does not augur well for the Tibetans …and India.