Where is Lobsang Gyaltsen? 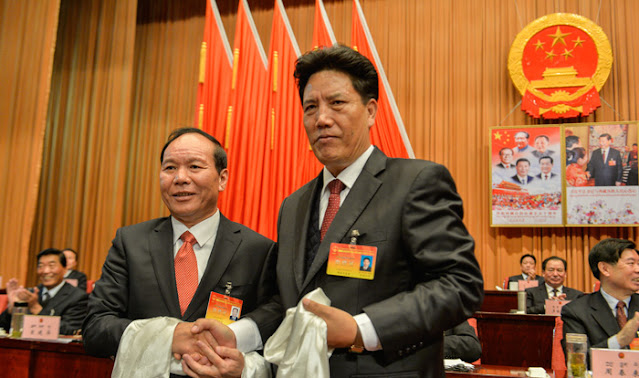 The Ninth Plenary Session of the Ninth Committee of the Tibet Autonomous Region (TAR) of the Communist Party of China and the Economic Work Conference of the District Party Committee were held in Lhasa from December 25th to 27th.

The Chinese media mentioned the importance of the conference held ‘at a historic moment’ when the 13th Five-Year Plan ended ‘successfully’ (with hundreds of new villages on India’s borders, among other achievements!!).

Xinhua added: “The building of a moderately prosperous society in all respects was achieved, and the new journey for the comprehensive construction of a socialist modern Tibet, which is about to begin, is self-evident.”

A communiqué spoke of 2020 as ‘extraordinary year’ for the TAR which made “every effort to control the epidemic and resume work and production. It is expected that the annual growth rate of regional GDP will remain the first in the country [read China]. In the post-epidemic era, [the question is] how should Tibet’s economic work will coordinate epidemic prevention and control and economic and social development?”

Some official websites recently spoke of 30 or 40 million tourists on the plateau in 2020 when the rest of the planet remains confined or semi-confined!

During the meeting, Wu Yingjie, secretary of the TAR Party Committee, said that “after careful consideration and careful research, the main expected goals for the economic and social development of the TAR in 2020 are: economic growth at more than 9%, per capita disposable income for urban and rural residents at 10% and 13% respectively. And the urban survey unemployment rate remains at 5.5%, while the consumer price rises at around 3%.”

Wu concluded that “Tibet needs to build a new development pattern and expand the industries needed in the Region, so as to provide strong support for farmers and herdsmen to continue to increase their income and improve their happiness index.”

Che Dalha, deputy secretary of the Party Committee and Chairman of the TAR government, noted that “the expected economic growth target of 2021 is over 9%. The main consideration is the GDP growth rate of Tibet in the first four years of the 13th Five-Year Plan reached 9.3%, which is 2.6 higher than the national average.”

Che pointed out that the fixed asset investment of the entire society will increase by more than 5% while investment will be more than 60 billion yuan: “The TAR has set-up a strong epidemic prevention and control, and tourism is expected to rebound significantly in 2021; the current consumption rebound is obvious… Many factors cooperate with each other to form a strong impetus and drive at a 9% economic growth rate.”

He stated: “It is therefore necessary to continue building the seven major industries of plateau: biology, cultural tourism, clean energy, green industry, modern services, high-tech digital, border trade and logistics, and ensure that the output of highland barley is stable at 800,000 tons, and the output of meat, eggs, milk, and vegetables are also stable.”

Incidentally, he spoke about the upgrade the G219 highway cutting across the Aksai Chin in Northern Ladakh (of course, he did not mention this); but he said that it will be a channel to promote the development of rural tourism (in Western Tibet and Xinjiang!).

He finally mentioned the implementation of the ‘two-mountain theory’, i.e. strengthening ecological environment protection, and ensuring that the percentage of days with good ambient air quality remains above 98%.

Where was Lobsang Gyaltsen?

This was indeed an important gathering, but the real news was not about the Happiness Index, it was about the absence of Lobsang Gyaltsen, the Chairman/Director of the TAR Regional Congress and senior most Tibetan cadre (he is a full member of the all-powerful Central Committee).

Gyasltsen was nowhere to be seen.

It is too early to speculate, but that there not many explanations as of now; either he caught a bad cold or more (the delegates were seen respecting social distancing during the Plenum, with only alternate chairs occupied by the participants) or Lobsang Gyaltsen is under ‘investigation’.

It would be the senior most Tibetan to go through this discipline process.

In 2015, it was reported that Le Dake, a former top Chinese security official in Tibet had being investigated ‘for suspected graft’. It was announced by the Central Commission for Discipline Inspection, the Communist Party’s anti-graft watchdog, then headed by Wang Qishan. Reuters commented that it is “a rare example of corruption busters going into the restive and remote region.”

In December 2019, a Chinese court sentenced one of China’s most senior Uygur officials to life in prison for taking bribes. Shenyang Intermediate People’s Court in the northeastern province of Liaoning handed down the sentence to Nur Bekri, a former director of the National Energy Administration and ordered the confiscation of all of his personal properties. According to Xinhua, Bekri admitted accepting more than 79 million yuan (US$ 11.2 million) in bribes between 1998 and 2018. He earlier served as Governor of the Xinjiang Uyghur Autonomous Region.

Who is Lobsang Gyaltsen?

Lobsang Gyaltsen is a Tibetan born in Drayab in Chamdo City in July 1957.

He joined the Communist Party of China in December 1978 and later graduated from the Central Party School.