When China takes Tibet for a ride! 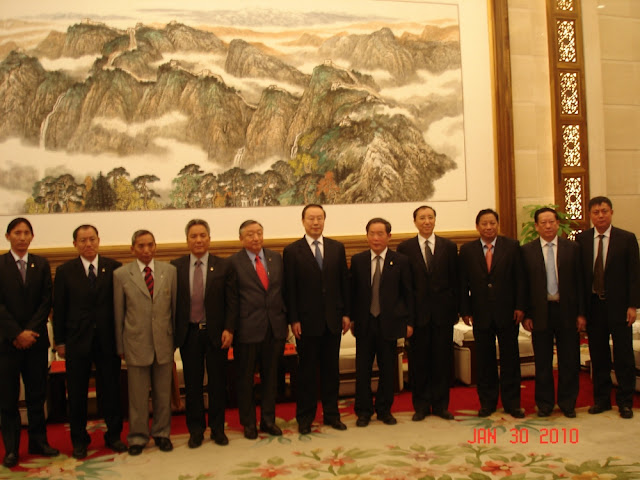 Zhu Weiqun is a well-known hawk, at least as far as Tibet and ‘religion’ are concerned.

A few years ago, he retired as Executive Deputy Director of the United Front Work Department (UFWD) of the Communist Party of China (CPC).

Born in Jianhu County, Jiangsu Province, Zhu graduated from the department of journalism of the school of the Chinese Academy of Social Sciences; he joined the CPC as early as July 1970.

In February 1999, he became the UFWD’s Executive Deputy Head and as such he was responsible for the negotiations with Dharamsala (2002-2010).

In January 2006, he was promoted to minister rank.

Zhu was supposed to have retired from active politics in 2013; but he took an ornamental job as Chairman of the Ethnic and Religious Affairs Committee of the Chinese People’s Political Consultative Conference (CPPCC).

As such Zhu is close to Wang Yang, the CPPCC’s boss, who looks over the Tibetan issue as well as religious and minorities’ affairs and Hong Kong and Taiwan …and the United Front Work.

From time to time, Zhu still writes a nasty article in The Global Times.

On June 9, in one these articles, he commented on the visit of Terry Branstad, the US Ambassador to China, to Tibet.

Speaking about the ambassador, he remarked: “It is hard to figure out his true feelings about Tibet. On the one hand, he spoke positively of Tibet’s economic and social development, (which disproved the Dalai Lama group’s lie about the destruction of Tibet’s environment by the Qinghai-Tibet Railway). On the other, he repeated the hackneyed remarks of the US government.”

Zhu strongly criticized Branstad, who dared, according to him, to encourage Beijing “to engage in substantive dialogue with the Dalai Lama or his representatives, without preconditions, to seek a settlement that resolves differences.”

This was not appreciated by Zhu. Why?

Zhu said it is blatant interference in China’s internal affairs.

He also questioned the meaning of ‘seeking a settlement without preconditions’ as well as the definition of a ‘substantive dialogue’.

Though time and again the Dalai Lama has said that he wanted an association with China; Zhu considers the Dalai Lama as a splittist. The ‘retired’ Communist leader also said (does he really believes it?) that the Dalai Lama’s clique has only one objective, to split China.

At the same time, Zhu gave the assurance that the CPC’s Central Committee had not closed the “door to contacts and negotiation with the Dalai Lama.”

Showing his hard-line stance, he added that “the proposed negotiation cannot come without preconditions.”

One remembers the preconditions given by Hu Yaobang, the CCP General Secretary to Gyalo Thondup in 1981; it was called the “Five-Point Policy towards the Dalai Lama”.

Please note, these five points are not related to Tibet, but only to the Dalai Lama’s status.

Zhu Weiqun and his clique have often asserted that there was nothing to discuss about Tibet, the ‘negotiations’ could only be about the condition of the Dalai Lama’s returns to the Motherland and his status …in Beijing.

The five Points were:

In his recent article in The Global Times, Zhu explained: “First, it must be made clear that in nature, contact and consultation are not talks between China’s central government and the Tibetan government-in-exile or ‘Central Tibetan Administration’, nor are ‘Tibetan-Han Talks’ or ‘Tibetan-China Talks’. The Dalai separatist political group is illegitimate and ineligible to have a ‘dialogue’ with representatives of the CPC Central Committee.”

Beijing wants only to talk to the Dalai Lama’s personal envoys.

In my book The Negotiations that Never Were, I argued that with such conditions the ‘talks’ could go anywhere and they indeed went nowhere during the Lodi Gyari’s days (nine rounds between 2002 and 2010).

It has never been clear why Beijing wants to link Taiwan to Tibet.

Regarding the other point, China has been insisting that the Dalai Lama agreed that historically Tibet has always been a part of China.

Tibet is part of China only since 1951

When a senior Tibetan exiled Lama went to China a couple of years ago, the Chinese said that they wanted the Dalai Lama to sign a statement acknowledging that Tibet has been part of China since ancient times. This is obviously not acceptable to the Dalai Lama and the People of Tibet, as it was a falsification of history.

Taking a hard stand, Zhu affirmed that in these two preconditions “there is no so-called Tibet issue, but just the problem of the Dalai Lama. The Dalai group, whose existence is against the Chinese Constitution, is not at all eligible to discuss Tibetan affairs with the CPC Central Committee.”

It means that today, the Chinese stand has not changed; Beijing is ready to discuss the Dalai Lama’s status, not the status of Tibet.

The former UFWD official does not like the word ‘substantive’.

He listed the ‘substantive’ issues presented by Lodi Gyari and his team during the ‘negotiations that never were’, it included “denying that Tibet has been a part of China since ancient times; defining Tibet as a ‘State’ occupied by China; demanding the Dalai Lama’s rule to be extended to the whole of ethnic Tibet, (i.e.) Qinghai, as well as two autonomous prefectures in Sichuan, one in Yunnan and one in Gansu (an area equal to one fourth of China’s territory); requiring the People’s Liberation Army (PLA) to withdraw from Tibetan areas and make it a so-called international zone of peace under the control of Western countries; requiring all the Han people who settled down in Tibet return to where they came from – in other words, to implement ethnic cleansing in all Tibetan areas.”

It is travesty of the demands of Lodi Gyari; how could the Special Envoy ask for a Zone of Peace under Western control?

Incidentally, the Seventeen Point Agreement signed ‘under duress’ by Tibetan delegates in May 1951 admitted the invasion of Tibet; Article I said: “The Tibetan people shall unite and drive out imperialist aggressive forces from Tibet; the Tibetan people shall return to the family of the Motherland the People’s Republic of China (PRC).”

Article III stated: “In accordance with the policy towards nationalities laid down in the Common Programme of the Chinese People’s Political Consultative Conference (CPPCC), the Tibetan people have the right of exercising national regional autonomy under the unified leadership of the Central People’s Government (CPG) of the PRC.”

Zhu may have not read the Agreement. This nevertheless raises the question, how and when was the right to autonomy dropped?

To come back to Zhu’s article, he affirmed: “If the US government insists that ‘substantive’ dialogue means meeting all the aforementioned requests of the Dalai Lama, then its hopes would be dashed.”

My question is: what the point to discuss, if what China promised in 1951 cannot even be brought today on the negotiating table.

Zhu Weiqun observed that during his visit to Tibet, Branstad had met with the Communist leaders, that he visited “local communities, educational and cultural institutions and religious sites, which at least improved his understanding of Tibet.”

Zhu’s conclusion was that “the knowledge he gained from the trip will help him in his career.”

The Ambassador’s career should not be the concern of the Chinese …or the Tibetans.

Zhu added that “Since the peaceful liberation [the Chinese term for occupation], especially since the reform and opening-up [the massacre of thousands of Tibetans in 1959], Tibet has witnessed rapid economic and social development, with people’s livelihood improving and the environment getting better and better. From my point of view, China could and should create conditions for more foreigners to visit Tibet and encourage them to draw their own conclusions based on what they see.”

It is not the case today, though the Chairman of the CPPCC’s Ethnic and Religious Affairs Committee affirmed that “Tibet’s door has always been open to foreigners.”

At the end, he again puts the blame on the ‘Dalai clique’ who creates disturbance in Tibet, forcing Beijing to take ‘administrative measures’ to regularly close down Tibet to visitors.

All this will not help to bring a rapprochement between Dharamsala and Beijing (probably China is not interested).

The time has perhaps come for the Tibetan Administration to set aside the idea to find a negotiated agreement with Beijing and wait for a new leadership to emerge in the Middle Kingdom.

Remember when the Chinese forces invaded Tibet in 1910, the Thirteenth Dalai Lama took refuge in India, and returned to Tibet in 1912 to proclaim the Independence of Tibet.

He wrote in his Testament:

“As a result of our meritorious Karma, and the numerous prayers and services that were conducted in Tibet, internal strife took place in China. It was no problem therefore to completely drive out the Chinese from Tibet.”

This shows the importance given by the Tibetans to the power of prayers and rituals.

Zhu Weiqun final conclusion is: “We must start from the needs of stability and development in Tibet.”

We should not forget that ‘stability’ has serious implications for the Indian borders and schemes such the Xiaogang villages, often mentioned on this blog, and the fast building of infrastructure on the plateau is truly worrisome.