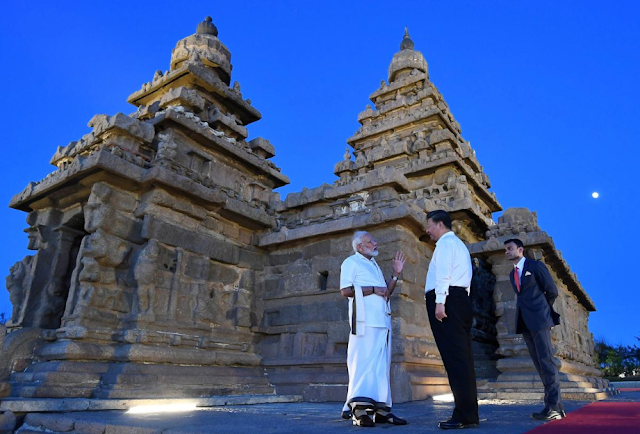 Indian commentators have always been fond of the word ‘civilisational’, it was already so during the Nehruvian days, it continues today; it must be something anchored in Indian genes.

As I never really understood the meaning of the term, I finally looked it up in the dictionary: it is “the act or process of civilizing, as by bringing out of a savage, uneducated, or unrefined state, or of being civilized.”

Well this does not help much.

The two-day meeting between Prime Minister Narendra Modi and President Xi Jinping at a resort in Mamallapuram was another occasion to talk ‘civilizational’. A famous columnist recalled: “The Pallava prince from Kanchipuram renounced the throne, became a Buddhist monk, known as Bodhi Dharma in India and DaMo in China, almost like how prince Siddhartha became Buddha. His guru asked him to go to Zhen Dan – today’s China. Bodhi Dharma, who became India’s first spiritual ambassador to China, also emerged as its chief mentor. Regarded as Buddhaabdara (Buddha’s Avatar), he expounded Zen Buddhism and founded the famous Shaolin Temple in China’s Henan province,” and added “Modi is now reviving memories of Bodhi Dharma to position him as the icon of India’s civilisational outreach to China, which is integral to his overarching strategic civilisational diplomacy.”

My own take is completely different; I believe that when nations start speaking about their past, it is often because they prefer to avoid talking about the present. It may be what happened between India and China during the two-day encounter in Mamallapuram?

According to Xinhua News Agency, Prime Minister Narendra Modi and President Xi Jinping “in a friendly and relaxed atmosphere, held a candid and in-depth exchange of views on bilateral relations and major international and regional issues of common concern,” (interestingly, I came across a Chinese report speaking of a ‘relatively relaxed atmosphere’).

Without denying the great past of the Chinese nation, one question was certainly not discussed at the sea resort: which type of civilization can China boast of today?

The day after his meeting with Modi, Xi Jinping, then in Nepal, warned that those not respecting the One China policy would be crushed: “Anyone attempting to split China in any part of the country will end in crushed bodies and shattered bones. And any external forces backing such attempts at dividing China will be deemed by the Chinese people as pipe-dreaming.”

According to China’s state media, Xi said this to the Nepali Prime Minister during his stay in Kathmandu; to state it mildly, it is rather unusual for a Head of State to use such words. One can imagine what would have happened to the Indian Prime Minister if he had uttered such statements, the Western media would have gone wild. But it is the prerogative of the Chinese president to be able to say such a thing, without being shot down.

The South China Morning Post commented: “While the immediate context would have been the Tibet issue, in light of the Nepal government’s crackdown on Tibetan independence activists protesting against Xi’s visit, China-watchers also saw it as a wider warning that applied to Hong Kong as well after more than four months of civil unrest and street violence.”

The Chinese proverb, ‘kill the chicken to warn the monkeys’ immediately comes to mind.

The Chinese ‘influence’ in India was experienced on a small scale by the Tibetan refugees who tried during Xi’s visit in Tamil Nadu, to protest against the happenings on the Roof of the World; many young refugees ended in police custody (mercifully the local police did not crush their bones). At the same time, the Dalai Lama declared in Una (Himachal Pradesh): “We enjoy freedom living in India, in one way I am a refugee, but I enjoy India’s freedom”. Everything is relative would have said the Buddha.

During the Mamallapuram summit, termed by the Indian Government as the ‘Chennai Connect’, the Chinese President observed: “Maintaining and developing good relations between the two countries is China’s unwavering policy.”

Probably influenced by the cultural tour given by the Indian Prime Minister on the first day, Xi spoke of ‘national rejuvenation’ for India and China.

The reference is also ‘civilisational’ as the concept is linked to the Chinese Dream to see the Middle Kingdom becoming the most powerful nation in the world.

Though it is not known what went on for two and half hours during the one-to-one dinner composed of delicious dishes, very few concrete decisions seem to have been taken. The Indian communiqué from the PMO said that the two leaders “evaluated the direction of bilateral relations in a positive light.”

The leaders agreed that the international situation is witnessing significant readjustment: “India and China share the common objective of working for a peaceful, secure and prosperous world in which all countries can pursue their development within a rules-based international order.”

But is China following ‘rules-based’ policies, whether it is the South China Sea, Tibet or Xinjiang? The great fear of the people of Hong Kong and Taiwan is that Beijing-based rules will soon prevail.

The difficulty with ‘unofficial’ meets is that the talks are not minuted, no joint statement is issued and no joint press conference is held.

Everything remains ‘informal’; and the parties are not bound to the decisions taken (if any) as there is no signature on any agreements or minutes.

Can the age-old “commercial linkages and people-to-people contacts in the past two millennia,” in other words the civilisational links solve the current contentious issues such as Chinese claims over Ladakh? Certainly not; though it helped to relax the atmosphere which had been vitiated by Pakistan Prime Minister’s visit to China a few days earlier.

The Indian Foreign Secretary said that the K word was not pronounced, it is regrettable; it was an occasion to clarify the Indian position.

Xinhua said that President Xi made some proposals such as the dragon and the elephant dancing together being “the only correct choice for the two countries” or the two countries should “correctly view their differences, and never let the differences dim the overall situation of bilateral cooperation.”

One positive outcome is the decision to establish a High-Level Economic and Trade Dialogue mechanism “with the objective of achieving enhanced trade and commercial relations, as well as to better balance the trade between the two countries.” This could hopefully help to rebalance the trade deficit, today in India’s disfavour.

Regarding the border dispute, both parties reiterated that efforts should be made to arrive at a mutually-agreed framework for a fair, reasonable and mutually acceptable settlement; similar words have been used since 1960. However, the PMO communiqué speaks of the Political Parameters and Guiding Principles agreed by the two counties in 2005 and later rejected by China. Article VII stated that in reaching a boundary settlement, the two sides shall safeguard due interests of their settled populations in the border areas,” which meant that areas like Tawang would no longer be claimed by China. We should know if China really agreed to this when, hopefully in a not too distant future, the Special Representatives meet; otherwise the Meet would have been ‘civilisational’ only (though one very positive outcome was the cleaning up of the area around the resort).

This article Was Modi-Xi Chennai meet a ‘civilisational’ encounter? appeared in the Asian Age/Deccan Chronicle.

One thought on “Was Modi-Xi Chennai meet a ‘civilisational’ encounter?”