US ties pegged on Indian appetite for technology 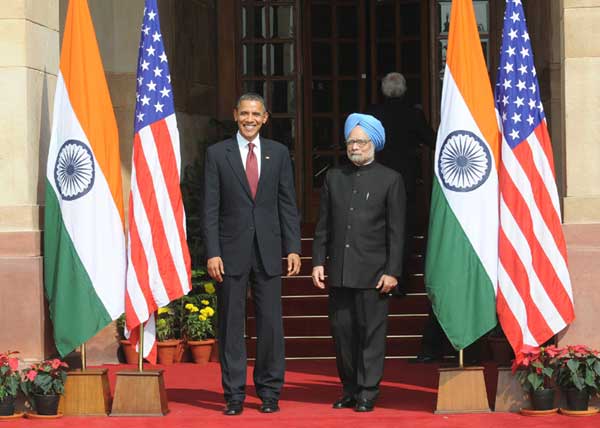 The aim of India-US dialogue is that as India rises and seeks an adaptation of existing rules, it does so in a concerted manner with the US.

Our ties with the US have improved remarkably. The number of dialogues that the two countries are holding — on energy, education, agriculture, health, development, science and technology, environment, trade, defence, counter-terrorism, non-proliferation and high technology — far exceed those with any other country.

The US position on India’s permanent membership of the UN has evolved positively, indicating that the US is inclined to open the strategic space that India claims for itself.

The objective is to build Indian sectoral capacities with US technology and know-how, a process that would help India grow and provide the US greater opportunities in an expanding Indian economy.

The US position on India’s permanent membership of the UN has evolved positively, indicating that the US is inclined to open the strategic space that India claims for itself. The US has also committed itself to promoting India’s membership of the existing four non-proliferation regimes.

The US attaches importance to bilateral dialogue on global commons — air, space, sea and cyberspace. The aim is that as India rises and seeks an adaptation of existing rules, it does so in a concerted manner with the US. Freedom of navigation and securing the sea lanes of communication are areas where the US has particular interest in partnering India, given India’s dominating position in the Indian Ocean and the steady expansion of its navy.

Cybersecurity is a matter of urgent international attention and India’s emergence as a major IT power, along with the vast expansion of its telecommunications network, makes it a partner of choice to establish new rules of the game.

India’s defence ties with the US in the last decade signify greater mutual trust. In the last few years, the US has bagged orders worth about $9 billion, but it expects a greater share of defence procurements.

India is holding numerous joint military exercises with the US, especially elaborate naval exercises in the Indian Ocean area. These convey an important strategic message in view of massive trade and energy flows through these waters.

India’s defence ties with the US in the last decade signify greater mutual trust. In the last few years, the US has bagged orders worth about $9 billion, but it expects a greater share of defence procurements.

The US has described India as a lynchpin of its rebalancing towards Asia. China’s growing muscle-flexing requires the US to strengthen its presence in Asia to give confidence to its allies who may otherwise seek accommodation with China. Because of its attributes, the US clearly sees India as a vital partner in the years ahead.

India, however, is wary of this re-balancing strategy as it doubts the capacity and inclination of the US to contain China beyond a certain point because of the huge economic and financial interdependence between the two countries.

On the issues of terrorism and religious extremism, while bilateral cooperation in the area of counter-terrorism has progressed, the ambivalence of US policies undermines Indian interests.

The US decision to talk to the Taliban disregards India’s strong objection to any political accommodation with it without insisting on the red lines laid down by the international community. The US decision to leave Afghanistan in 2014 in conditions permitting an orderly withdrawal with the help of the Pakistani military creates a potential security problem for India.

The Iranian issue has created wrinkles in our bilateral relationship as US sanctions have interfered with India’s energy security, forcing India to reduce its oil intake from Iran quite drastically and blocking Indian investments in attractive long-term projects in the hydrocarbon sector in Iran.

The last decade has also seen a significant expansion of India-US economic ties, with trade in goods standing at $62 billion and the total exchanges amounting to over $100 billion, making the US India’s largest economic partner.

The prospects of nuclear cooperation with the US have dimmed because of our nuclear liability act. The US is pressing for signing a “small works agreement” between Westinghouse and NPCIL to register some progress to fulfil India’s commitment to order 10,000 MW of nuclear power from US reactors at two sites.

Other issues have contributed to a distinct lowering of enthusiasm for the India relationship in the US, such as perceived Indian protectionism exemplified by our Preferential Market Access decision to force foreign companies to set up manufacturing facilities in the telecom sector; Supreme Court judgment on the patents issue which has exacerbated concerns about IPRs; and retroactive application of tax legislation as in the Vodafone case. The US corporate mood towards India has soured, and this needs to be reversed.

The US is pushing for a Bilateral Investment Treaty. On climate change and WTO issues, India and the US have differences.

On the Indian side, we have problems with the new Comprehensive Immigration Bill that will put more restrictions on the movement of personnel from India to the US in the IT sector, the increased cost of H1B and L1 visas that will impose sizeable costs on the Indian IT sector.

The general view is that the relationship is now suffering from the fatigue factor.

Prime Minister Manmohan Singh and President Barack Obama will be grappling with these issues when they meet shortly.

3 thoughts on “US ties pegged on Indian appetite for technology”