US-India ties in the age of Xi Jinping: Why is China so central? 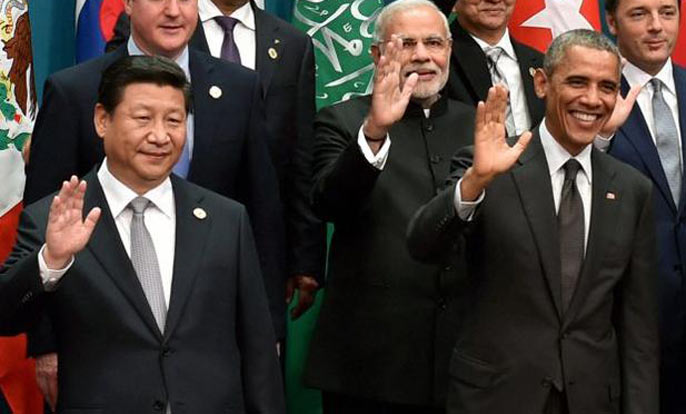 When Chinese President Xi Jinping visits Washington in late September, the United States and India will have an opportunity to assess—and then bolster—their nascent cooperation in Asia.

The fact is, this triangular relationship matters. It has often been argued that the US and India don’t “need” China as a rationale for cooperation. Two continental-sized countries, with deep maritime traditions and a diverse array of energy, economic, and security interests, have numerous reasons to cooperate and coordinate. But there can be no denying that China bulks large in the strategic calculations of both countries.

For one thing, China’s growing strength confronts Washington and New Delhi with sometimes distinct, but increasingly shared, strategic and economic challenges. So too does the prospect of Chinese weakness—for example, if Beijing fails to shift toward a new economic model as its current approach runs out of steam.

The good news is that the US and India have recognized the potential for cooperation in Asia—partly, it should be acknowledged, because they share interests and concerns about what kind of power China might become.

Much has been made of the joint statement on cooperation in the Asia-Pacific issued during President Obama’s January visit to India. But that emphasis on the Pacific is not new. It dates back over a decade, so there is depth and longevity to the issues and concerns that have fostered a growing alignment of interests.

As early as November 2001, US-India joint statements emphasized “common goals in Asia.” A landmark 2002 speech by then-Ambassador to India Robert Blackwill positioned Asian geopolitics squarely at the center of the argument for strengthened partnership: “Peace within Asia—a peace that helps perpetuate Asian prosperity—remains an objective that a transformed US-India relationship will help advance.”

Why is China so central?

Start with economics. Asia’s relationship to the world economy has changed dramatically since the mid-2000s. For decades, G-7 countries beat a path to Asia’s door. But the other foot now wears the shoe as many economies, including Western economies, increasingly rely on Asian industrial and household consumers. Asian countries have become much more than traders. They are investors, builders, lenders, and, in some areas, a growth engine.

China is a central player in this Asian drama. Indeed, for all its challenges, including a pronounced economic slowdown, China is the top trading partner of more than sixty countries, many of them in Asia.

Overcapacity and slackening Chinese demand have rocked numerous economies, especially commodity producers. But If China succeeds in rebalancing its economy toward a new model, it will foster some new demand drivers, for example through the accelerated growth of household consumption.

Nor is China’s slowdown, or its recent stock market turbulence, likely to alter its increasingly central role as an investor and builder of infrastructure. These could ultimately change Asia’s economic face, not least in South Asia, as Beijing’s “One Belt, One Road” infrastructure initiative converges with other efforts, including a $40 billion Silk Road Fund and the new Asian Infrastructure Investment Bank and BRICS Bank, both of which India has joined as a founding member.

China’s foreign and economic policies are converging in unprecedented ways. Beijing burned a sizeable chunk of its $4 trillion in foreign exchange reserves amid the summer’s market turbulence. But it retains reserves—some now being recycled into investments offshore—larger than the nominal GDPs of India, South Korea, and Thailand combined, and equivalent in size to the world’s fourth-largest economy. China’s abundance of capital is an extension of Beijing’s foreign policy: it will continue to leverage state-backed financial vehicles for economic and strategic ends.

Now, take security. From the maritime commons to the cyber domain, US-China security competition has become increasingly intense. But India, along with some others in Asia, shares elements of these American concerns. Washington and Beijing have some clashing security concepts in Asia, not least in the South China Sea. So too do New Delhi and Beijing in Southeast Asia and the Indian Ocean.

These are just some of the issues on the agenda for Xi’s state visit to Washington. But here’s the catch: some issues on that agenda could bring Washington and New Delhi closer, but others could drive them apart as American coordination with Beijing risks creating wedges between the US and India.

One example of the former involves domestic investment rules in China. Beijing has deployed regulations and standards as a non-tariff barrier—to the detriment of US and Indian investment alike. But an example of the latter involves intensifying climate change coordination in the run-up to December’s multilateral negotiations in Paris: the US and China are moving into alignment on climate, even as New Delhi stands apart and flirts with seeking exceptional treatment.

One problem is political. It is difficult to imagine a major East Asian security contingency—Taiwan, Korea, the South or East China Seas—to which US-India operational coordination would be relevant. India would almost certainly keep itself aloof, influenced by many of the same Indian voices that helped to scuttle refueling support of the US in the 1991 Persian Gulf War.

Another problem involves Indian perceptions of American ambivalence about India-China security tensions. The United States, for its part, would likely try to remain aloof from a blowup on the India-China border, not wishing to be caught in the middle. That would, predictably, raise hackles in New Delhi about US “unreliability,” further fueling Indian skepticism of America’s China policy.

Washington encountered precisely this suspicion full force in 2009, when it issued a US-China joint statement that included references to South Asia. Many in India choked on this statement—first, because they suspected a US-China condominium on New Delhi’s security equities; second, because few, if any, in India regard Beijing as a neutral party in South Asia; and third, because many fret that Washington could sideline New Delhi, working against Indian interests in pursuit of expanded US-China cooperation.

Ultimately, neither country will benefit if the other’s relationship with China fails. So the US and India face a test, especially after the Xi-Obama summit: Can they work jointly to capture the opportunities of China’s emergence, while planning for adverse contingencies?

One such opportunity involves cross-border investment. The US is now pursuing a bilateral investment treaty with China that could benefit India by opening more sectors to foreign competition—for instance in services, where both American and Indian firms excel.

Likewise with inbound Chinese investment, which now exceeds $54 billion in the United States. Especially at the state and municipal levels, many in the US seek to leverage Chinese capital, particularly via greenfield projects that have created thousands of American jobs. Prime Minister Narendra Modi’s agenda meshes well with this: he aims to harness Chinese capital to support India’s domestic growth and development needs.

Security challenges may prove tougher. For all their shared concerns about Chinese behavior in places like the South China Sea, the US and India have yet to make coordination more relevant to real-world East Asian contingencies. Joint planning remains elusive, so the 2004 US-India-Japan-Australia tsunami core group offers a useful model on which to build. Such outreach to Asian partners in trilaterals, quadrilaterals, or larger ad hoc groups could help, especially if organized informally and around functional issues, rather than in ritualized groupings.

Xi’s Washington visit won’t reshape the geopolitical landscape. But it reinforces, once again, that the US and India ignore at their peril the many ways that China affects their respective and shared futures. Xi’s visit offers an opportunity to reflect, coordinate, and build.