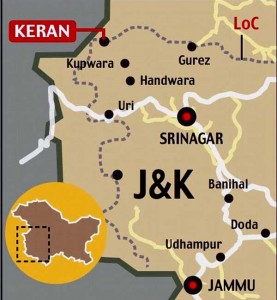 The failed BAT action of Sep 26, happened to be the third such strike in just two months, in the same area.

This not only highlights the vulnerability of our posts located there, but also displays the brave, swift and coordinated action of Sikh Light Infantry troops guarding the LoC. 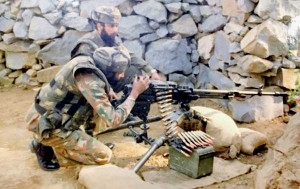 Pakistani SSG troops teamed up with terrorists of Lashkar-e-Taiba were launched from their launch pad in Rauta area opposite our Abad Guthur post.

They carried out BAT raid, on this isolated forward post of ours in Farkiyan sub sector in broad day light, taking advantage of dense cover and folds in the ground.

Our alert troops not only thwarted the raid. But they also were successful in isolating the Pakistanis thus preventing their escape.

Trapped and nowhere to go, Pakistan army resorted to heavy firing to help their beleaguered comrades under eminent threat of annihilation. 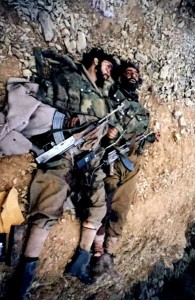 Indian troops retaliated with heavy CounterMortar fire. Scanning of the Pakistani radio transmissions with the scared SSG troops exposed panic and utter sense of despair in their ranks and files.

A similar attempt was foiled, by the mighty Gurkhas co-located on Sep 19, 2017. In that counter BAT action, we however lost one soldier.

This treacherous stretch of Shamshabari range being guarded in Keran sector, the posts are located over 12000 feet above the sea level.

Guarded by the fearless Khalsas of one of the finest regiments of the Indian Army. It is proving nightmarish for the enemy in his nefarious designs.

The brigade commander of this toughest and the most challenging Brigade is a paratrooper himself with extensive experience in specialized operations.

He understands the psyche of the Pakistani commandos well and this lends to high degree of leadership necessary in dealing with such BAT misadventures.

Shamshabad Ridge in the months of Aug-Sep

Our forward posts jutting out towards the enemy by almost 1.5 km from our main defenses. They are located on spurs emanating from the Shamshabari ridgeline.

Lying way ahead of the counter infiltration fence, literally adds to their vulnerability manifolds.

All these vulnerable posts are however well stocked with adequate rations and ammunition. This makes them self-contained for 14 days, in event of being cut off due to vagaries of weather or Pakistani action.

These, officer led posts have troops with very high level of motivation and physical fitness. This being necessary to face up the challenges thrown up by the terrain and deployment.

The action by our troops of Sep 26, comes within 24 hours of warning to Pakistan by General Bipin Rawat, on the increased infiltration attempts from their side.

Army Chief General Bipin Rawat warned that a new round of surgical strikes could be used to eliminate staging areas for terrorists located across the border in Kashmir.

The chief warned that his troops are ready to force infiltrators into their graves. “Terrorists will keep coming because the (terror) camps are operational there (across the LoC). Even we are ready. We will keep receiving them (infiltrators) to dispatch them two-and-a-half feet below the ground”.

It was last year on the night of Sep 29-30, the Indian Army carried surgical strikes on seven Pakistani launchpads along the wide frontage of 700 km plus across the LoC.

During these counter terrorist operations, significant casualties were caused to terrorists and those providing support to them.

These surgical strikes were carried out in retaliation to the dastardly attack by Pakistani terrorists in Uri on Sep 18, 2016 that had killed 19 Indian soldiers.