lives with his wife, in Southern California and enjoys quiet days, sunsets, beaches,  and watching the world go by.  In addition to 44th IMA, he has degrees in business, international trade, and finance, and held senior energy advisory positions involving the Eastern bloc and Central Asia.  He enjoyed extensive travels for work and pleasure and observing countries and cultures in transition. 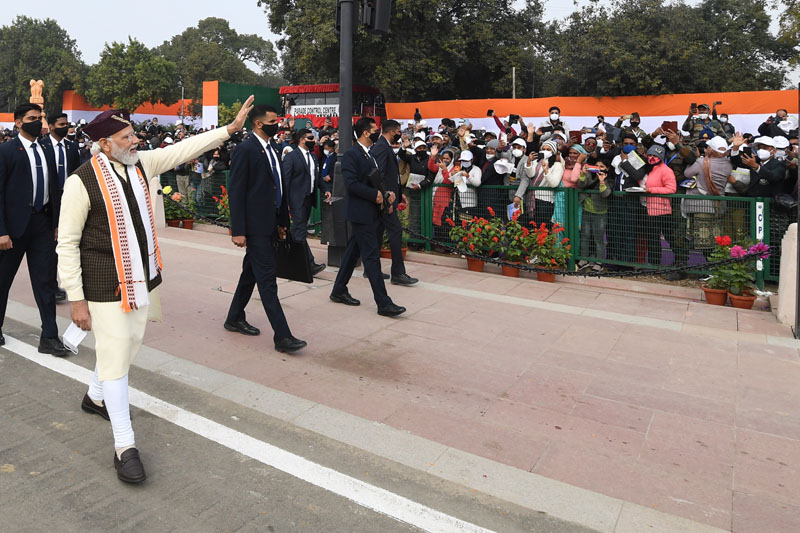 PM at Rajpath, during the 73rd Republic Day Celebrations, in New Delhi on January 26, 2022.

The landmark 73 years of the Republic have brought India at the forefront of nations that matter, and its armed forces from the shadows to their rightful place, in a large and open democracy, into the mainstream, as it should. In a free, open, and more confident country, which has shaken the post-colonial past, the military is an equal partner, in everyday life and its celebrations — celebrating the vast diversity, advancing national unity, spurring cutting-edgescience, research, technology, aviation industry, and hi-tech manufacturing,in addition to meeting internal and external challenges, and guaranteeing peace, stability and freedom – basic building blocks for economic prosperity, the life and nationhood.

Only in recent years, the citizenry, Aam Aadmi, has come to see the military, as a brother, sister, son and daughter, friend and neighbor, and more comfortingly, even as grand-mother or grand-father, who they rub shoulders with, everyday. As free citizens, they don’t fear their armed forces’ lethality — big guns, rumbling tanks, Apache gunships or deadly MiGs, menacing Mirages or rough Rafale, BrahMos, or Agni missiles.  The glittering uniforms of marching columns of men and women in the Republic Day parade with colorful military bands, pomp, and show are enjoyed by one and all– a source of pride, joy, and inspiration for the youth.

This coming-out of the Indian Military from its old mantle on the national center stage is truly remarkable and heartwarming for many like me, who answered the call from 1962-debacle,a half-century back, to the IMA (with a small cameo role in 1971). Joining Forces at barely 20, of an equally young nation in post-colonial shock, the political-civil leaders in their infinite wisdom felt confining the Army to barracks, a safe-bet.  Not to be heard or listened to on larger public discourse, or matters of strategy, or tactics played on naivete, insecurities, and inexperience. “Not to be trusted after dark, and kept in the dark”, paid a heavy price in inadequate-weak policy and strategic framework, in dealing with a post-conflict world of 1971 and earlier, in sub-par political and diplomatic outcomes!

So, what has changed this picture? And, what is there to celebrate?

Today’s Indian Military has earned and enjoys the admiration, accolades, and trust of a vast swath of the citizens – across the political divisions, bureaucracy, farmers and industry, businesses, entrepreneurs, and most everyday common citizens.

First, with the recent Galwan-standoff and Kargil battles in the backdrop, the Aam-Aadmi, can closely relate to the Forces, as one of their own – in some measure helped by media – Bolly-Tollywood, YouTube, Josh, and TedTalk, where many former, 3, 4 and no-stars have provided yeoman service to demystify military matters and filled a huge civil-military chasm, of fear and mistrust.

More importantly, the Forces have delivered on a long stellar record with professionalism, code of conduct, selfless service, and sacrifice, and coming through, time and again.  Most recently, the legacy of CDS General Rawat in projecting a cohesive national power has cemented this trust for the Forces in the national psyche, alongwith the political-civil systems* of the Government.

On a lighter but serious note, the Indian Navy’s Bollywood song and dance routine were phenomenally awesome and apropos, representing pop culture, celebration, authentic India, and IN’s home town!  Not sure why the Navy brass had last-minute jitters! Bollywood music is a phenomenal success, celebrated around the world!! It is time to jettison the solemn ‘Auld Sang Lang’ and the Indian Military bands need to get on with home-grown major hits – vibrant, lively, and the World loves them……and be the brand- ambassadors!!

BTW, the Russian honor guard in Moscow, played “merajootahai japani…” more than 30 years back, without causing a major diplomatic snafu or uproar, just as Xi did, playing an other hit for Modi, in Wuhan!!

NOTE:  *By contrast,the current US Senate and House have 18 and 79 ex-military, each, who exercise significant influence on all aspects of government.