Trouble Brewing over the Middle Kingdom 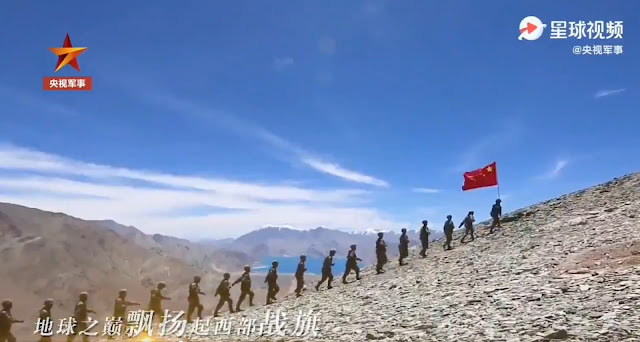 The Ladakh Misadventure for Chairman Xi

The Fifth Plenum of the 19th Central Committee of the Chinese Communist Party (CCP) was held between October 26 and 29 at Beijing’s Jingxi Hotel; if one is to believe the Xinhua statement, China is doing very well.

A message the CCP wanted to convey: the 360 or so attendees wore no masks, an indication of confidence to show that the Middle Kingdom has tamed the homemade Covid-19.

One of the outcomes of the Plenum is that Xi Jinping vowed to build a fully modern army by 2027: “The four-day plenum in Beijing wraps up with a statement that says it has entered a period of ‘strategic opportunity’ for development” said the South China Morning Post, while plans for next 15 years “highlight key role for technological development and importance of boosting domestic markets.”

Despite the usual rhetoric, mainly directed to the internal audience, one could asked what has President Xi Jinping achieved by hiding for weeks the spread of the deadly virus which originated in Wuhan and later by sending the People’s Liberation Army (PLA) to grab Indian land in Ladakh.

To understand better, let us answer a few questions, including about the logic of the Chinese armed intervention in Ladakh.

Will India’s strategic road Darbuk–Shyok–DBO Road, which seems to have greatly bothered the generals in the Western Theater Command in Chengdu, be stopped? The answer is ‘no’; it will soon be completed allowing the Indian Army to bring reinforcement in a much shorter time to these remote areas.

Has the Chinese attack forced Delhi to drop its claim on Gilgit-Baltistan being India’s territory? No.

Will Gen Zhao Zongqi, the big PLA boss who already was responsible for the Doklam episode in 2017, be rewarded by a seat in the over-powerful Central Military Commission? It is now extremely doubtful as Zhao has not achieved anything militarily, especially after the Tibetan/Indian commandos occupied the ridges South of the Pangong tso (lake).

Has the PLA gained any meaningful strategic advantages in Ladakh since May? Perhaps minimally in Depsang and in the Fingers area, but it is balanced by losses in South Pangong tso.

India has been the taget of an intense Information Warfare’s firing by the specialized agencies in China, particularly the United Front Work Department; this has worked to some extent, with some Indian publications faithfully reporting the Communist version of the events, in exchange for some advertisements in their newspapers, but over-all it is limited and the Indian public has not been intimidated, on the contrary; President Tsai Ing-wen of Taiwan, has now become one the favorite Heads of State of the Indian public, due to China’s aggressive tactics.

Has Chairman Xi’s prestige been enhanced in India and elsewhere in the world? Not at all, once again on the contrary; in India, Xi has lost the goodwill earned after his encounters with Prime Minister Modi, i.e. the Wuhan Consensus and the Chennai Connect. There will be no such meetings for years to come.

Has the prestige of PLA, as a fighting Army, grown? Certainly not; despite its might (on paper at least), the PLA was unable to grab significant Indian territory.

Recently the Pew Research Center, a nonpartisan think-tank working on issues and trends shaping the world, conducted a public opinion on China with 14 countries. It found that unfavorable views of China reach historic highs in most of the countries surveyed: “a majority in each of the surveyed countries has an unfavorable opinion of China. And in Australia, the United Kingdom, Germany, the Netherlands, Sweden, the United States, South Korea, Spain and Canada, negative views have reached their highest points since the Center began polling on this topic more than a decade ago.”

One can only conclude that the trend will continue with the belligerent attitude shown during the Fifth Plenum prevailing.

Has China made economic gains during the last one year? Again no; many flagship companies such as Huawei, the giant telecom company, are in difficulties in most Western countries; it is a question of time that its 5G services will also be banned in India. It is clear that Xi Jinping has lost face all-over, with the exception of ‘sponsored’ nations like Pakistan.

The situation is so bad that Beijing does have much alternative to come out the self-created imbroglio; the Party is caught in a vicious circle, with the only way out being more repression towards Hong Kong, Taiwan, the Uyghurs or the Tibetans, or sponsoring rogue States.

Interestingly, for many Taiwan has become a model of a Chinese democratic system, which everyone hopes will one day be adopted in the Mainland.

Further, Xi Jinping’s main achievement has been to unite many nations against China.

After the last meeting of the Quad which took place on October 7 in Tokyo, Principal Deputy Spokesperson Cale Brown stated that the foreign ministers of US, Japan, Australia and India had reaffirmed their collective efforts towards a free, open, and inclusive Indo-Pacific: “they pledged to continue regular consultations to implement their vision of a peaceful, secure, and prosperous Indo-Pacific.” Nations like France have already shown their interest to join.

Dr Jaishankar, the Indian Foreign Minister observed: “the performance of our relationship in the last few years has been exceptionally positive. Political consultations and cooperation have grown, defence exchanges and trade too, economic interactions and commerce are up, the partnership in science, technology and innovation is stronger and our energy security clearly enhanced.”

There are more examples of positive developments triggered by China’s hegemonic attitude.

According to a report of the Yomiuri Shimbun, it was announced on October 30 that “the Japanese Ground Self-Defense Force was planning to hold a large-scale exercise of 140,000 people next year; almost all Japanese troops will participate in response to the ‘Taiwan affair’ (Beijing’s attitude towards Taiwan). The last time such a large-scale exercise was conducted in Hokkaido against a hypothetical Soviet invasion in 1985.”

After promising to ‘stand with’ India in its confrontation against China in Ladakh, US Secretary of State Mike Pompeo used strong words against China during his visit to the Maldives and Sri Lanka; during an encounter with President Ibrahim Mohamed Solih, he announced the opening of an embassy in the archipelago.

It means that India’s neighbours are slowly turning their back on Beijing.

A top Indian diplomatic source told The Print that Pompeo’s visit to Sri Lanka is “obviously going to help in reducing China’s influence in the region,” the source added: “All these countries which Pompeo is visiting — Sri Lanka, Maldives and Indonesia — are key for the success of Indo-Pacific. India is seeking to establish robust and resilient supply chains with them.”

With or without the US, the pro-China equation is progressively changing in the region.

The forthcoming visit of General MM Naravane, the Indian Army Chief (COAS) to Nepal, even if it does not solve the border dispute planted by China, is bound to rekindle the ancient kinship and deep cultural, religious and economic closeness between India and Nepal.

There is no doubt that Xi Jinping’s reckless and arrogant attitude has not helped China to achieve anything towards Beijing’s declared objectives to work for the Community of Nations, on the contrary.

One thought on “Trouble Brewing over the Middle Kingdom”