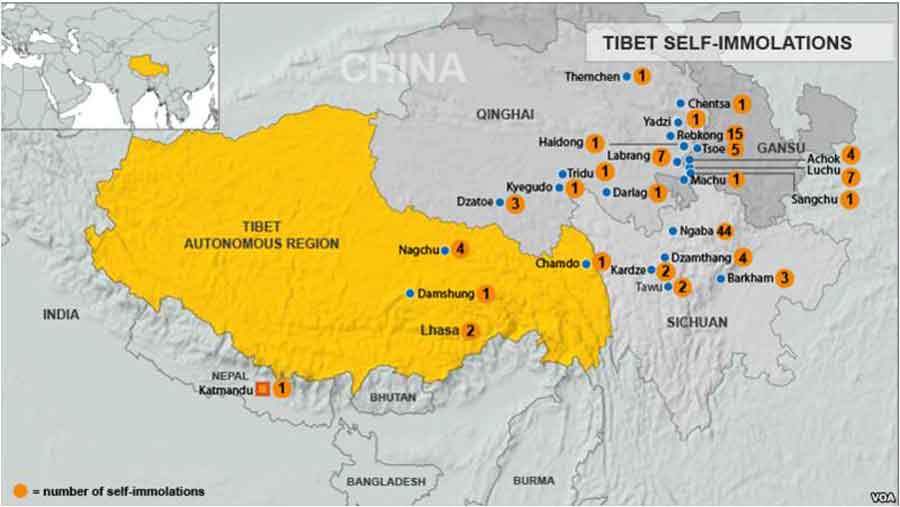 India has a border of 4057 Kms with China of which more than 90% is bordering Tibet and less than 10% borders the Xinjiang Province of China.  In the State of Jammu and Kashmir 78,000 Sq Kms is under illegal occupation of Pakistan and 35,500 Sq Kms are under the illegal occupation of China.  Even the Strategic Western Highway linking Sinkiang and Tibet goes through the Indian claimed area of Aksai Chin.   Further Pakistan has given Shaksgam Valley covering 5200 Sq Kms to China from the illegally occupied portion of Jammu & Kashmir.

China in the past has modernised her infrastructure in Tibet…these improvement are basically to improve her offensive posture in Tibet against India.

In the Eastern Sector the entire Indian State of Arunachal Pradesh covering an area of 90,000 Sq Kms has been claimed by China.  The area is presently defended by our Armed Forces against Chinese, whose intent is to capture it.  The world has seen the belligerence of China both in South China Sea and East China Sea. Even in the recent past China has waged war against UN Forces in Korea early 1950s, against Soviet Union in 1969, India in 1962 and Vietnam in 1979.   It is just a matter of time for China to focus her attention towards India.  She is already carrying out intrusions across the Line of Actual Control (LAC) between China and India.

China in the past has modernised her infrastructure in Tibet.  She has constructed the Qinghai-Tibet Railway over the permafrost areas of Tibet, crossing the Kunlun Mountain at a height of over 5000 meters.  She has increased the road capacity of her Central, Eastern and Western Highway connecting Tibet with the mainland China. She has constructed five airfields in Tibet and also established a highly developed optic fibre communication network in Tibet.  All these improvement are basically to improve her offensive posture in Tibet against India.   All these infrastructural developments enable her to move her offensive forces from elsewhere in China to Tibet.  She has also stationed her Second Artillery (her nuclear and missile force) poised against India in Tibet.

Tibet is a delicate ecosphere and contains the third largest ice reserve. The other two are North and South Poles.  Area of Tibet is 2.5 million Sq Kms that is almost one fourths of China.  In 1965 China formed TAR (Tibet Autonomous Region) and assimilated Inner Tibet as four provinces of China i.e. Gansu, Qinghai, Sichuan and Yunnan.  It was a clever move which enabled them to split Tibetans living in China.  Now TAR is just one eighth of the whole of China.  Tibet has a rainfall of 12 to 20 inches annually.  From Tibet many great rivers originate i.e. Indus, Sutlej, tributaries of Ganges; Karnali and Kosi, Dangeme Chu in Bhutan, Brahmaputra, Irrawaddy, Salween, Mekong, Yangtse and Hwang Ho.  These rivers sustain Pakistan, parts of India, Nepal, Bhutan, Bangladesh, Myanmar, Thailand, Cambodia, Laos, Vietnam and China itself. Hence Tibet supports overone billion of the world’s population.

…after Independence India did not secure her borders and only when China had finished constructing the road linking Tibet with Xinjiang through India’s claimed territory, did we realise the existence of the road and the incursions by Chinese.

Tibet also is a storehouse of minerals.  It has more than 126 minerals such as gold, silver, chromium, iron, coal, oil, gas, magnesium and many rear earth minerals that are essential for electronics industry.  Uranium an important source of nuclear energy is abundantly available in Tibet.  China is plundering these resources and using it as an engine of economic and industrial growth of China.  More than 40% of China’s natural resources are found in Tibet.  Tibet is also being used by China to dump her nuclear waste, despoiling the fragile ecology of this world famous biosphere.

From the time of British, the Indo-Tibetan Borders have been well defined.  Shimla Accord of 1914 between British-India, China and Tibet defines and lays down the boundary of Eastern Sector of India (now Arunachal Pradesh) and Tibet.  However China did not sign the Agreement hence the boundary was formalised between Tibet and British-India.  Also to note after the end of Qing Dynasty in 1911, Tibet was independent.  His Holiness 13th Dalai Lama had signed the Proclamation of Independence on 13 Feb 1913 and Tibet remained a sovereign Country till invaded by China in Oct 1950.  It was a brutal invasion that subjugated an Independent Country.  It was sad though India deplored the invasion; literally did nothing to assist Tibet.   Further India along with Britain blocked a resolution in UN General Assembly in Dec 1950, to discuss the Chinese invasion of Tibet.  Again in 1954 India accepted Tibet as a part of China in Trade and Protocol Agreement and surrendered India’s special rights and privileges in Tibet. After accepting China’s takeover of Tibet; naturally the Indo-Tibetan Boundary became Sino- Indian Boundary.  China obviously had neither accepted nor signed the Shimla Accord of 1914.  India’s strategic naivety ensured that the resolved Boundary issue with Tibet became Unresolved Boundary Problem with China.  It has remained unresolved to this day.

In Western Sector (Ladakh Sector) there are different lines that have been the boundary between Tibet and British-India.  It was during the time of Sikhs under Maharaja Ranjit Singh, Gen Zorawar Singh, his General captured Ladakh and went on an expedition to Mount Kailash and reached Taklakot in Tibet.  During his time Ladakh and Leh were incorporated in Sikh Kingdom in mid 19th Century.

However after Independence India did not secure her borders and only when China had finished constructing the road linking Tibet with Xinjiang through India’s claimed territory, did we realise the existence of the road and the incursions by Chinese.  Even this issue has not been resolved to this day.

Currently the Sino-Indian Border Problem has intertwined with the Tibetan Issue.  Till the time Tibetan issue is settled the border differences would remain.

In the Middle Sector where Tibet borders with Himachal Pradesh and Uttarkhand there are minor differences on border issues between the two countries.

The border negotiations between India and China have continued for the past 35 years however it is unbelievable but true that the Chinese have still not given their claimed lines in the Western and Eastern Sectors.  It is only in the Middle Sector they have given their claimed lines.  Don’t we then have real doubts as to without knowing each-others claimed areas in two major sectors what tangible discussions are really taking place? Is our county fooling the general public? With all the so called chemistry between PM, Modi and President Xi Jinping, where they have exhibited bear-hugging and back-slapping bonhomie, there has been no breakthrough on the hard issue of getting China to put forward her claim lines?

Currently the Sino-Indian Border Problem has intertwined with the Tibetan Issue.  Till the time Tibetan issue is settled the border differences would remain.  It would be in India’s interest to have an independent Tibet as it was during 1913 to 1950.  Once Tibet becomes independent the Indo – Tibetan Border would be a Zone of Peace and India’s threat perceived from China would reduce.  The British were wise strategist, when they played the ‘Great Game’ with the Russians.  Fearing Russian Communist Expansion to India they earmarked Persia, Afghanistan and Tibet as buffer between them and Russia.  Had India taken a page from the British, we could have had Tibet as buffer between India and China.

It is our duty to educate our countrymen so that they understand the Tibetan issue and have the knowledge to support the cause.

Indian leaders were indeed naïve and only Sardar Patel can be credited of having strategic vision among the leader of independent India.  It is interesting to read the letter written by Sardar Patel to Nehru on 07 Nov 1950 laying out his perception on China.  Unfortunately the letter went unheeded and India had to face a humiliating defeat at the hands of China in 1962.

Currently India has more than 1,00,000 Tibetan exiles in our  country.  It is in our interest that we provide them with aid and nurture their individual entity.  Their spark of freedom should be fanned by our encouragement and empowering them with spirit and desire to free their country from foreign yolk.  India is already hosting ‘Tibetan Government in Exile’ (TGIE).  They need to be properly funded and Tibetan population should be allowed to grow without assimilating them.  Their distinct cultural, religious and national identity should be protected.  India along with TGIE needs to plan how to smoothly transcend post Dalai Lama Phase.  HH Dalai Lama is a charismatic figure and has a world-wide following and plans to be made to ensure that the Tibetan Freedom Movement does not lose its steam.

It is our duty to educate our countrymen so that they understand the Tibetan issue and have the knowledge to support the cause.  The Jews waited for 2000 years to get their homeland.  Their resolve and struggle should be a guiding beacon for the Tibetans to earn their freedom from Chinese Occupation.

One thought on “Tibet : Strategic Frontier of India”