The Yarlung Tsangpo HPP: Mega Tragedy in the Making 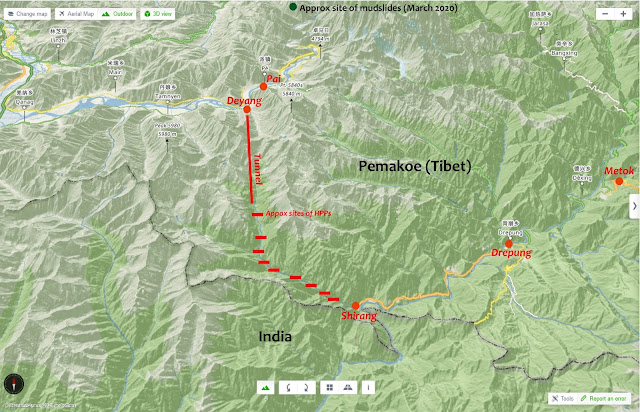 Dave Petley, Pro-Vice-Chancellor (Research and Innovation) at the University of Sheffield in the UK has a blog which provides scientific information on landslides or mudslides occurring worldwide.

He elaborated: “I received an email from Göran Ekstrom of Columbia University making a small group of us aware that he had detected, using seismic instruments, a probable large-scale landslide in the vicinity of the Yarlung Tsangpo in Tibet. As always, the seismic data gives an indication of location, but not a precise grid reference, and an idea of the mass (in this case about 100 million tonnes – a very large one indeed).”

Whether it was triggered by an earthquake in this highly seismic area, is still not clear.

As we shall see, it could also be due to torrential rain.

The British scholar continued: “Fastest out of the blocks was Marten Geertsema, who used partially cloudy Planet Labs satellite imagery to identify a possible site. Yesterday [March 28], Planet Labs data with low levels of cloud became available. Dan Shugar from the University of Calgary was able to identify that the location was correct, and that a large landslide had occurred.”

Shugar said: “Planet Labs’ images of the Tsangpo Landslide from Mar 13 and 28 show failure of some small hanging glaciers (similar to Chamoli in Uttrakhand) and likely rock material, which dropped 3900m (!!) from ~6600m to 2700m to Yarlung Tsangpo valley bottom, causing partial blockage (but some water flowing).”

Pethley commented: “Dan and I slightly disagree with how this (and Chamoli) should be described (which is fine of course). Dan describes this event as the collapse of hanging glaciers, whereas I consider it to be a rockslide that has taken some ice with it. Researchers love semantics!”

Pethley further explained: “Either way, at Yarlung Tsangpo it is clear that a large amount of rock and ice have detached from the east side of the tributary valley, moving westwards and then to the south. Once again this has formed a catastrophic channelised flow that has travelled down the channel to deposit a large volume in the main channel. This was probably blocked briefly, but as the image above shows water is now flowing freely.”

He mentioned a huge increase in turbidity of the water downstream of the blockage on the Yarlung Tsangpo.

Stuart Dunning of Newcastle University noticed another aspect in his response to Dan Shugar: “This must be one of the most dynamic landslide locations on Earth. I have previously written about another landslide at exactly the same site. That event looks broadly similar to this one.”

I have written on this blog three years ago about another landslide in the same area.

The Location of the Mudslide

The slide is about 50 km downstream of projected giga hydropower plant (HPP) on the Yarlung Tsangpo and it is not presently directly connected with the forthcoming project.

According to The People’s Daily, the Tibet Autonomous Region Meteorological Bureau announced on March 7 that during the week between March 8 to March 14, the temperature in most parts of Tibet would be high for the season, and it would be raining: “in the eastern part will receive rain and snow, and high-altitude road sections are prone to snow and ice.”

The meteorological department reminded the public “to pay attention to traffic safety and prevent secondary disasters such as mudslides. Relevant departments need to continue to strengthen fire prevention in grasslands, forests and cities.”

It spoke of possible ‘mudslides’.

The point is that the area around the proposed HPP is environmentally extremely fragile, but Beijing does not seem to care much about that.

In November 2017, an earthquake shook the area around Mt Namcha Barwa, also near the Great Bend; as a result, the Siang/Brahmaputra suddenly became black.

An excellent article (‘Muddy Siang is sign of danger ahead, wake up call for Indian authorities’) described the developments on the Yarlung Tsangpo/Siang/ Brahmaputra. It was published by the South Asia Network on Dams, Rivers and People (SANDRP).

It said: “The current ongoing episode of Muddy Siang River water in Arunachal Pradesh is due to landslides in the upstream Tibet, triggered by the earthquakes starting on Nov 17, 2017 or possibly earlier. This is revealed by the satellite pictures and work of two researchers, first published in Arunachal Times on Dec 21, 2017. These landslides are partly blocking the Siang flow and could lead to massive floods in the downstream Arunachal Pradesh and Assam any day.”

Why the Chinese officials kept quiet for weeks, if it was ‘only’ a simple earthquake and why India remained ‘unaware’, when it was not too difficult to ‘know’ the facts with remote satellite imagery.

SANDRP questioned the role of the Indian officials in this.

According to the report quoted by SANDRP, a huge amount of debris accumulated and blocked three locations, forming natural dams on the river across a 12-kilometre stretch in Tibet. It was cause by a 6.4 (or 6.9) earthquake in the Great Bend region. It darkened the waters of the Yarlung Tsangpo.

Due to Heavy Rains?

Unlike in 2017, the present mudslides are probably due to heavy rains.

It is however extremely worrying when one think that China is planning a HPP thrice the size (or at least the capacity) of the Three Gorges Dam. See my previous post about this.

The area is definitively fragile and earthquake-prone.

The areas were the 2017 and 2021 mishaps occurred is of course located upstream the proposed giga project, but in the future mudslides/landslides could trigger heavy sedimentation, as well as the other possible problems.

For example, if mega mudslides happen in the area of the proposed giga HPP, the reservoirs could well quickly fill up with dirt and the turbines and tunnels/pipes would need to be closed and cleaned, forcing China to temporarily divert the waters of the Yarlung Tsangpo/Brahmaputa.

India should be concerned by the happenings upstream the McMahon Line/LAC.

On November 30, 2020, The Global Times had announced China’s plan to build a large hydropower project on the Yarlung Tsangpo; the Communist tabloid admitted that it could raise concerns in India “over potential political and ecological threats as the river passes through Southwest China, India and Bangladesh. [But] Chinese experts refuted the claim that Chinese hydropower project have political aims, and said the project could help alleviate power shortage problem in northern India and boost regional economy.”

It is obviously a non-sense.

According to the head of POWERCHINA the planned hydropower station – which is expected to have three times as much generating capacity as the world-leading Three Gorges power station – “aims to maintain water resources and domestic security.”

The Global Times continued: “However, the news raised India’s concerns, with some experts and media worried that Chinese activities in upstream areas may hurt interests downstream. Some are even concerned that China will use the hydroelectric project as a tool to serve its political strategy in the region, along with the border military conflict in Ladakh, or to curb India’s right to explore downstream water resources. … But these energy projects can benefit the entire regional economy, if properly coordinated.”

Coordination will not take place, but even with ‘coordination’ the extreme frailty of the area will remain.

The project during the 14th Five-Year Plan?

During the Two Sessions in Beijing in early March, it was reiterated that “the construction of key projects should be promoted, such as the Sichuan-Tibet Railway and hydropower development on the Yarlung Tsangpo River, according to the 14th Five-Year Plan (2021-25) for National Economic and Social Development and the Long-Range Objectives Through the Year 2035, which was adopted by China’s top legislature and published in full.”

So, is it a fait accompli, the giga HPP will be constructed?

During the Two Sessions, the Chinese media reported that Che Dalha, chairman of the Tibet Autonomous Region and deputy to the 13th National People’s Congress: “urged acceleration of the project and comprehensive planning and environmental impact assessments” for the project.

One can doubt that proper assessment will be conducted? Will the Chinese ‘scientists’ take into account the presence of tens of thousands of truck and GCBs moving earth around and changing the shape of the mountains, north of the Indian borders?

It looks more the question of an aging Emperor wanting to show the world that He has constructed a HPP thrice the capacity of the Three Gorges Dam, than love for environment.