The War in the Valley, Baltistan and Ladakh 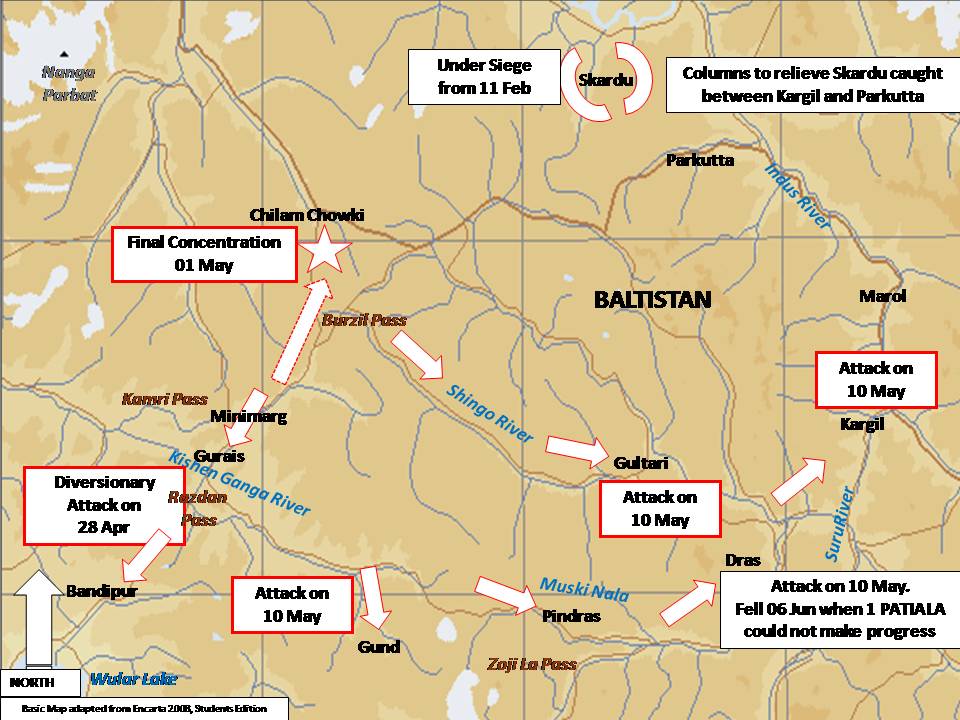 After the link up with Punch, Brigadier Sen firmed in the defences of his brigade around Uri. He deployed 1 SIKH and 4 KUMAON at Uri while 2 DOGRA was deployed for the defence of Baramulla. The enemy did not let the defenders settle down and the first attack came on 22 November against the Nalwar post. Luckily, prior intelligence had been received from the locals and helped the Indians in inflicting heavy casualties. On 24 November, it was the turn of Subhash post and this time the enemy suffered even greater casualties. Notwithstanding, the enemy continued to attack the defences and Nalwar post was subjected to sixteen attacks till 9 December. Brigadier Sen commented that the tactics employed by the enemy had undergone a radical change.[1] From the battle formations, communications and weapons, it was clear that the enemy operating against him were trained soldiers mixed with tribals. This fact was later corroborated by 163 Brigade who apprehended a regular Pakistan Army officer from Trehgam, on 9 February.

Meanwhile, the enemy remained active and occupied Bhatgiran in the south of the Indian post of Ashok and blocked the axis to Haji Pir. Since this was a direct threat to his defences at Uri, Sen decided to dislodge the enemy from his dominating position. 1 SIKH, under Lieutenant Colonel Sampuran Bachan Singh[2] was tasked to clear the enemy. The attack that was put in on 13 December proved disastrous, as disregarding the advice of his seasoned company commanders, the inexperienced CO placed the troops at a disadvantageous position and the enemy managed to catch the Indians in the open. As a result, the battalion had to be pulled back to Srinagar to recoup; command again devolving on Colonel Harbaksh Singh. To fill in the void, 6 RAJRIF under Colonel Kalan was sent post haste from Srinagar.

Subsequent patrols sent by 4 KUMAON to Bhatgiran on 20 December found the defences vacated; whether this was a result of heavy casualties due to artillery shelling or because of the winters was not discernible. Nevertheless, winter became the new enemy and hence the front remained inactive. It was only with the setting in of spring of 1948 when a new threat built up in the rear to Mahura from the side of the Limber Nullah, which joined the Jhelum River from the north. Intelligence reports indicated that an AK Brigade composed of three battalions, supplemented by three thousand tribals were being built up to outflank the Uri defences and cut the road to Srinagar. While the enemy was building up at the Limber Nullah, information was being received by 161 Brigade, as they could listen to the radio transmissions being made by the enemy and he even blundered by giving away his attack date of 10 April. This called for major readjustments, including the bringing up of the battalion from Baramulla and luckily, due to the early opening of the Banihal Pass, 1 MADRAS came as a welcome addition to the formation. Thus, when the attack finally came, the Indians were waiting and though the fighting stretched over seven days, it was a disaster for the enemy.

Operations in the Handwara – Trehgam-Kupwara Sectors

Despite the blistery conditions, reports of large scale incursions across the Shamsha Bari Range were received on 7 February. Trehgam in the northern part of the valley, half way between Tangdhar and Kupwara was reported to be in enemy hands, posing a threat to Sopore and Srinagar. With 161 Brigade deployed in Uri, there was only 1 SIKH under Harbaksh Singh that could be used. However, due to the heavy snow, move was only possible on 4 x 4 vehicles, which were limited, restricting the strength of the force that could be moved in response to the reports.

The first contact took place at 1730 hours on 9 February, when a group of the infiltrators, including a regular Pakistani officer were apprehended. The information gleaned was that an AK battalion, organised and equipped as a regular battalion and commanded by a Pakistani Lieutenant Colonel had intruded in the valley. Despite the hasty cordon put around the Handwara, the enemy managed to sneak out. The chase was then taken up towards Kupwara, but on finding the town deserted, the chase continued and contact was finally made at a village called Guglus, where forty of the enemy were killed. In the meanwhile, on 23 February, the enemy put in a strong attack on a post of 7 SIKH at Kupwara. Though this resulted in heavy losses to the rebels, it highlighted the threat in the rear forcing the operations of 1 SIKH to be called off. With the Indian focus on the summer offensive, the sector was reorganised under Brigadier JC Katoch, who had returned to the valley after recuperating from his wounds and taken over the responsibility of North Kashmir.

The Relief of Leh

Since the situation at Skardu was getting gloomier, it was appreciated that Leh was in danger of being cut off and required urgent reinforcements. 2 DOGRA, then deployed at Baramulla was a Territorial Army (TA) Battalion who had two officers and some troops from the region of Lahaul which had close affinity with Ladakhis. On a suggestion from the CO, Lieutenant Colonel G Bewoor,[3] Captains Prithi Chand and his cousin Khushal Chand volunteered to trek and organise the defence of Leh. These officers with fifty volunteers were entrusted with the challenging task of crossing the blizzard prone Zoji La Pass and make their way to Leh on foot. They carried 100 additional rifles and ammunition for raising a local Militia and braving through the frozen Zoji La Pass. These brave Dogras finally reached Leh on 16 February, 1948, well in time to organise its defence.

The Unsuccessful Relief of Skardu

Since no reinforcements were getting in, the situation in Skardu was getting desperate by the day and by 15 April; Thapa reported that his ammunition reserves were precariously low. ‘Z’ Brigade’ later designated as 163 Brigade, kept trying to send in reinforcements via Kargil, but for some reason or another they were unable to reach Skardu. The first relief party under Brigadier Faqir Singh of the state forces was ambushed on 17 March. Despite the disaster, reinforcements of over a battalion worth of troops pooled in from 5, 6 and 7 KI were hastily organised. This force was divided into two columns – ‘Sugar’ and ‘Biscuit’. Lieutenant Colonel Kirpal Singh was nominated the overall Commander, with Sampuran Bachan Singh, the erstwhile CO of 1 SIKH nominated as his second-in-command. It was an uncomfortable command arrangement since there was friction between the two officers. Kirpal Singh being at the tail of the 160 kms long column could not influence actions in any way, and to compound the situation, he was also out of communication with the columns moving ahead and even with his controlling HQ. To re-establish control, he was constrained to pass orders that all forward movement would only be on his orders. Bachan went over his head to HQ 163 Brigade and the unsavoury situation was temporarily resolved by declaring him as an independent commander, while Kirpal was to take over at Skardu. Since this cosmetic change produced no results, Kirpal was again made the overall commander, and Bachan was ordered to return. At that time, the column stretched from Sonamarg to Parkutta, while Skardu was still thirty kms away. Importantly, the move was under the watchful eyes of the enemy operating under the Ibex and Eskimo Forces, who were waiting for a chance to decimate these columns piecemeal.

The Pakistan Offensive in the North: Op Sledge

The Pakistan offensive plan capitalised on the Indian vulnerability of having the L of C to Ladakh running precariously close to areas from which he could infiltrate and cut off the road in a number of places. The enemy undertook a bold gamble and by accepting weakening of his hold over Skardu, pulled out the bulk of his men to strike at Gurais and threaten Bandipora, aiming to draw the attention of the Indians. Having diverted the Indian attention to Gurais, the Pakistan managed to infiltrate smaller columns along the Nullahs to strike the communication centres falling on the route to Kargil. All columns attacked simultaneously on 10 May, 1948. The plan codenamed Op Sledge is annotated in Map. It was a bold plan and created a major criticality for India as the entire stretch from Pindras to Skardu fell, and Ladakh was totally cut off.

The Loss of Kargil, Dras and Skardu

In view of the well-coordinated attacks on Gund, Pindras, Dras and Kargil, the KI columns were cut off from each other. Though each column had the capability to fight independently, the will and leadership that was required to do so was found lacking. The first to fall was Kargil, while Dras managed to hold on. In view of the situation, 1 PATIALA which had been moved up from the Akhnur sector was rushed to relieve Dras, though they could not go beyond Gumri. With no hope in sight, the Dras garrison of two platoons finally broke out on 6 June. With this, the urgency to advance to Dras receded and 1 PATIALA was tasked to firm in at Gumri and Machhoi.

In the meantime, realising that Skardu could not be reinforced, Thimayya ordered Thapa to break out on 16 May as he was under the impression that once Thapa linked up with the relief forces at Parkutta, he would still have a fighting chance. Unfortunately, his understanding of the situation was incomplete, since the forces of Sampuran Bachan Singh, assumed to be at Parkutta, had since disintegrated and was no longer a coherent fighting force. Thapa rightly recommended against the futility of the break out, and consequently the order to abandon Skardu was rescinded. At the same time, Thapa recommended that Kirpal should attempt to get to Skardu giving the two forces a chance to break out together. Unfortunately, by then, even the force under Kirpal Singh was no longer a fighting force, as he was ambushed and with this the last hope for Skardu faded. Skardu ultimately fell on 14 August, when there was neither ammunition nor food. Thapa had fought against all odds for eight long months and Skardu was the last bastion holding back Pakistan’s advance to Leh. Thapa was made a prisoner and repatriated later. India honoured this gallant officer with a well deserved MVC and he rose to become a brigadier.

Even 1 PATIALA came under threat as the enemy cut off their rear near Kangan, and Zoji La Pass came under threat since Gumri and Machhoi remained under pressure. Despite the precarious situation, reinforcements for the sector were still not available, as Thimayya was constrained to concentrate his forces for the summer offensive. Sensing no other option, on 7 July, he ordered 1 PATIALA to pull back and hold the shoulders of the Zoji La Pass.

Epilogue. The foremost lesson for India was in terms of intelligence. Despite the fall of Gilgit, India had failed to energise an intelligence setup in North Kashmir despite the favourable local population and was completely taken back by Op Sledge. This was not the first time when this important issue had let India down; unfortunately, this reoccurred with regular frequency.

[2] Ibid, p. 148, Bogey Sen has written that Sampuran Bachan Singh, a Territorial Army (TA) officer had unexpectedly found himself in command of 1 SIKH after the death of Colonel Rai. He neither had the experience, nor the training. In the bargain relied heavily on the advice of his Subedar Major; at times even going against the judgment of his company commanders.

[3] Later COAS of the Indian Army.