The Men Who Saved The Kashmir Valley 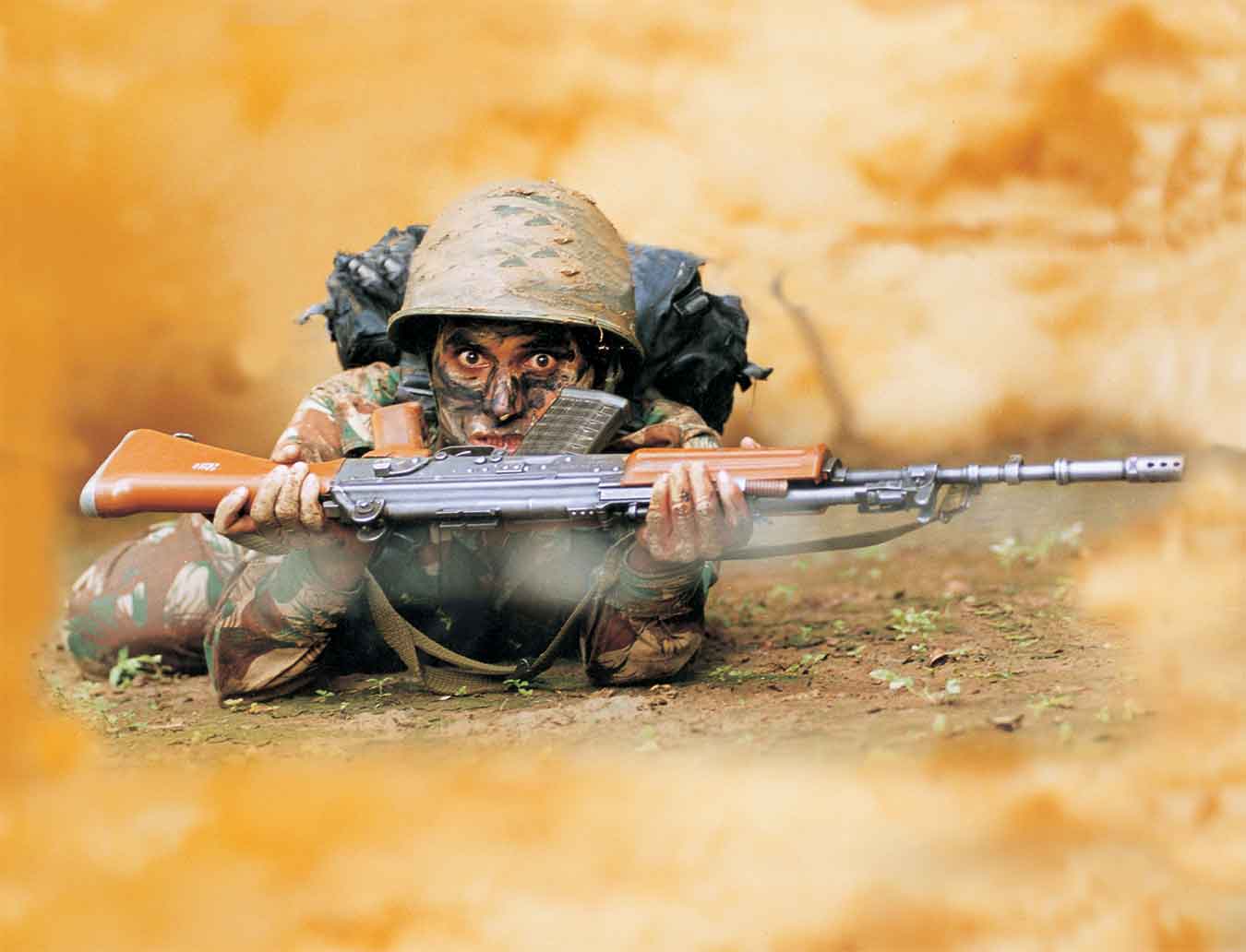 Oct 27 is celebrated as ‘Infantry Day’ in the Indian Army. On this day, Indian troops were air lifted from Delhi and landed at Srinagar to protect the airfield and save the town of Srinagar from falling into the hands of raiders. Pakistan had let loose the tribal hordes along with it’s military personnel to capture the valley and then later the whole of J and K. Indian Government for various reasons delayed the dispatch of troops to J and K and the information regarding the location of raiders was scanty. The status of the airfield at Srinagar was not clear and the possibility of it having already fallen to the raiders was very much on the cards.

In the early hours of 27 October 1947, Lt-Col Ranjit Rai, commanding officer of 1 Sikh along with his C and D companies took off in IAF Dakotas from Delhi on a mission to save the town of Srinagar and it’s airfield from falling into the hands of Tribal Lashkars. This invasion of J and K was under the overall command of Maj-Gen Akbar Khan of Pak army and had been code named, ‘General Tariq.’  No one in Delhi knew that the town of Baramullah, the gateway to the valley had already fallen to the enemy on the evening of 26 Oct. From Baramullah, Srinagar and the airfield were just over an hours drive and there was no opposition en-route.  The task given to Ranjit Rai and his troops of 1 Sikh had all the ingredients of a ‘Mission Impossible. ‘

Who then really saved the valley? Was it brigadier Rajinder Singh whose action in destroying the bridge over Uri Nallah, imposed a delay of two days on the enemy. Or the enemy itself which wasted two days at Baramullah in arson, looting and rape…

Maharaja Hari Singh of J and K had been dreaming of an independent Kashmir, till he was suddenly and unexpectedly jolted out of his reverie on the evening of Oct 22, by the invasion of his state at many points. The state forces though ill equipped and widely dispersed put up a gallant fight everywhere but at each point they were being over-whelmed by sheer numbers. Hari Singh was left with no choice but to seek India’s help. However, India was concerned about the legality of the issue and would not extend any help till Hari Singh signed the Instrument of Accession. He dithered and dilly-dallied and all this while, the raiders were making deep inroads into the state at various entry points. He finally signed the document on 26 Oct.

Had the government of India acted in anticipation, troops and air craft could have been assembled on 24 or 25 Oct and the first unit flown out to Srinagar on the afternoon of 26 Oct itself. Be that as it may, but once the decision to go to the aid of J and K was taken everything moved rather fast. Indian troops were dispersed all over Punjab and UP to quell communal riots. Only 1 Madras was available in Delhi.

However the unit nominated to fly to Srinagar first was 1 Sikh, which was deployed all over Gurgaon district. It was only by late evening of 26 Oct that Battalion HQ and C and D companies could be assembled at Delhi.  Next morning at 5.30 AM, Lt-Col Ranjit Rai with his two companies took-off for Srinagar in IAF Dakotas. Just before take off he was given one set of maps and the operational order from Army HQ. This order did not mention about the fall of Baramullah or the strength of the raiders but noted the chaos and panic in Srinagar. Elsewhere the instructions read that, ‘ If radio communication with the airfield at Srinagar is not established and you are not given permission to land there then you will return to Jammu and disembark.  At Jammu you will requisition civil transport and send reconnaissance party by road to Srinagar………. ‘

Ranjit Rai and his two companies landed at Srinagar at 9.30 am and after getting hold of whatever transport he could lay his hands on, dispatched C company under Capt Kamaljit Singh to Baramullah to defend that town.  D company under Maj Harwant Singh, MC was sent to Srinagar to carry out a flag march to restore order and confidence amongst the population. He himself decided to stay on at the airfield and await the arrival of his remaining two companies and take them to Baramullah. Capt Kamaljit on approaching Baramullah, saw smoke columns rising from the town and realised that it had fallen to the invaders. He, therefore, decided to take up defences at Mile 32; a few miles short of Baramullah. There were no mines or defence stores and digging tools were few but the defenders were stout of heart.

Maj Harwant Singh after the flag march in Srinagar, left one platoon for the protection of the bridge over Jhelum at Sopore ( 7 miles East of Srinagar ) and another platoon for the defence of the airfield and himself, with one platoon, joined Kamaljit at mile 32 at 4.30am on 28 Oct. Thus the total strength at Mile 32 was two company HQs, four platoons, section 3 inch mortars and few personnel of state forces horse cavalry, in all about 140 to 150 men. That is all there was between thousands of raiders and Srinagar.

Lt Col Ranjit Rai  was free India’s first officer to lay down his life for the country and also became the first to win the MVC (posthumous).

Unknown to many and not even recorded in the official history of J and K operations, is the destruction of the steel bridge, over Uri Nalla, under the direct supervision of Brigadier Rajinder Singh, C-in-C of J and K forces in the face of advancing enemy. This officer of the J and K state forces, not withstanding his high rank, had joined the forward troops. He was killed in this action and was awarded MVC. (posthumous) The destruction of the steel bridge over Uri nala proved crucial, because the enemy spent two days to make an improvised crossing thereby delaying its march on Srinagar.

Ranjit Rai, the commanding officer of 1 Sikh, had no communications with his troops because the aircraft carrying the communication equipment had developed a snag and had en-route force landed at Jammu. When his two other companies did not arrive on the morning of Oct 28, he decided to move forward and join his troops at mile 32 leaving instructions with the adjutant that as soon as the remaining two companies land these be sent forward without delay. Around 11.30 AM, the enemy, a few thousand in number, supported by heavy machine guns and 3 inch mortars attacked the position at mile 32.

This attack was held in check and when the enemy found that it could not dislodge the Sikhs, it started moving around the position with a view to cut them off from the rear. When the remaining two companies did not arrive and the situation at mile 32 had become untenable, Ranjit Rai decided to withdraw troops from mile 32. By now the withdrawal route was nearly cut off by the enemy. It was during this very difficult task of extricating his troops from the enemy cordon that Lt-Col Ranjit Rai fell to an enemy bullet. He was free India’s first officer to lay down his life for the country and also became the first to win the MVC (posthumous)

Troops fell back to, ‘spill channel’ a few kms outside Srinagar. Here  the remaining two companies of 1 Sikh and Patiala field battery in infantry role joined this position.

The enemy mounted a series of full blooded attacks to the beat of drums, as is the wont of tribals from the NWFP, but they found it impossible to dislodge troops of 1 Sikh. After all Indian army had dispatched one of its finest battalion to defend the Kashmir valley and there was no way the tribals and Pak army personnel, not withstanding their overwhelming numbers, could get the better of these men.

Who then really saved the valley? Was it brigadier Rajinder Singh whose action in destroying the bridge over Uri Nallah, imposed a delay of two days on the enemy. Or the enemy itself which wasted two days at Baramullah in arson, looting and rape or was it Lt-Col Ranjit Rai whose bold decision to push forward his troops towards Baramullah and himself joining them to keep the enemy at bay, rather than merely defend the airfield, as was the task given to him. Perhaps it were those handful of plucky and resolute lads of 1 Sikh as they held the tribal hordes at bay and are not known, who really saved the Kashmir valley.

7 thoughts on “The Men Who Saved The Kashmir Valley”