The Indecent Exposure - Lessons from the OROP Imbroglio 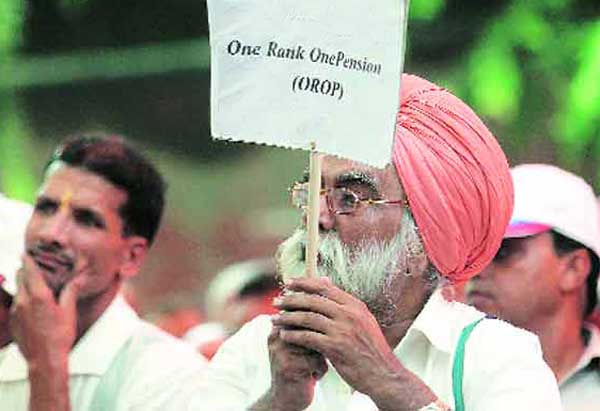 “Defeat is not the worst of failures. Not to have tried is the true failure” – George Edward Woodberry

Rejoice my friends – my countrymen, we have collectively achieved the impossible; something that other nations would have spent a fortune and invaluable time and effort to unearth what simmers below the surface.

Despite Mr. Modi’s success in unlocking the decades’ long logjam, the fact is that that by demanding ‘uniform pay for the same rank’ (other things being equal), the uniformed fraternity has been led up a garden path.

Despite Mr. Modi’s success in unlocking the decades’ long logjam, the fact is that that by demanding ‘uniform pay for the same rank’ (other things being equal), the uniformed fraternity has been led up a garden path. When they should have been demanding ‘parity’ with their civilian counterparts, including Non Functional Upgradation (NFU) – an (irrational) allowance promoting inefficiency but maintaining ‘pay parity,’ they have only been asking for equality amongst themselves – a colonel’s pay/pension against a latest retired colonel and so on. Issues of uniform grade pays etc., which are the barometer of inter-service seniority, have been conveniently left out of the narrative. Having said that, even after the momentous OROP decision, the government’s sincerity is questionable as red herrings like VRS and appointment of a Judicial Committee has muddied the waters. These need to be seen as clever ploys detracting from the main OROP issue: after all, how can pensions adjusted every five or even two years qualify as ‘One Rank–One Pay,’ this would translate as One Rank – Five/Two Pays. This that remains the nub of the question and goes against the grain of the well-meaning Koshyari Commission’s definition of OROP. Surely, in this age of smart computing, yearly increments can be done without human intervention – if we can’t manage even this level of computing, the Prime Minister’s plank of development through technology would sound hollow.

That having been said, the aim is not to discuss OROP perse, but to cull lessons and learn from this painful episode in our recent Indian history. No amount of Fact Finding Committees, Inquiries etc. could have exposed the black-hole of India’s (dysfunctional) civil-military relations; something that is serious and something for the government to address. If as a Nation, we choose to learn from this, we can evolve a better India, an India with (civilised) Civil-Military relations. However, if we refuse to learn, it would be fair to surmise that India needs no external enemies – she has enough internally. It may suffice to reiterate some fundamentals that have been lost sight of in this ‘high profile,’ emotional, but totally unnecessary campaign, there are some home truths that both sides must realise, and where possible, correct.

The military is advised to remain apolitical, something that is not only desirable in any democracy, but something that remains admirable even after decades of deteriorating civil-military relations in post independent India…

The military is advised to remain apolitical, something that is not only desirable in any democracy, but something that remains admirable even after decades of deteriorating civil-military relations in post independent India – this is a value that ‘cannot’ and ‘should not’ be allowed to be compromised.

Unlike this practice followed in military institutions, there is no such training that emphasises ‘Values’ and ‘Ethics’ in Civil Training Institutes like the IAS Academy, and the like. On the other hand, since the operating environment after their training is expected to be complex (read corrupt), the trainees, develop their own set of values and ethics – the result of their upbringing, experiences and knowledge, in order to ‘adjust’ and later ‘manage’ the real world. Those who don’t fit in become outcasts.

The third actor in the Civil-Military equation is the political leader, someone who parachutes directly into administration and gets placed at the highest level. He/she requires no training, qualifications or even codes and values – they come as they have been trained – most being street fighters and therefore savvy in wheeling-dealing –they are the true arbitrators and it is their absolute power wielded at the ground level that corrupts the maximum.

The fact that despite the emotive crusade staged at Jantar Mantar and other parts of the country, there has been no real support from the general public.

Be that as it may, is there a thing or two that can be learnt from the military system to improve on the quality of the civil and even political leadership? Can values and ethics somehow be incorporated into the civil administration and polity?

Indifferences of the General Public

The fact that despite the emotive crusade staged at Jantar Mantar and other parts of the country, there has been no real support from the general public. In fact, the people were bemused by seemingly well-off officer fraternity who are seen to be leading the agitation, pleading the case for a few hundred more. On the other hand, the uniformed lot, especially the officers, have not done any ground work towards building up their case in the general public and herein lies a lesson by itself.

Let’s try to explain what the officer lot is fighting for. The military leader is taught early in life that his mission is to strive for the welfare of his men before seeking his own comfort. This is enshrined in the Chetwoode Motto of placing the ‘Nation’ and ‘Your Men’ first. Therefore, the present crusade is not for the officers – it’s primarily for seeking justice the men – men who join in the prime of their youth (pre twenties) and are forced to retire at an average age of 35 or so. To illustrate the case: a sepoy who retired before 1996 gets 82 percent less pension than a sepoy who retired after 2006. Is this justice?[i] That’s what the OROP is about.

OROP is a corrective measure to compensate for the disadvantage of retiring earlier – nothing more, nothing else.

It is a fight for these lakhs of men who have offered their services when the nation wanted them to fight or stand vigil in unhospitable weather and terrain conditions. It is these men who between 35 to 37 years of life find themselves with no technical or social skill for a second innings for life out of uniform. Most land up as Security guards outside plush homes or malls, some plying rickshaws – the fight is for them. At the same time, it’s pertinent to interject that their counter-parts in the armed police forces serve till the age of sixty and now through the good offices of the court, are entitled to NFU. Thus, there is no real comparison. OROP is a corrective measure to compensate for the disadvantage of retiring earlier – nothing more, nothing else.

The officer lot seeks dignity, more than money, though it cannot be denied that also counts as they too are compulsorily retired much before their civil counter-parts. The average officer simply asks why he/she should be denied something like the NFU of his civil counter-parts, as when he joined, he/she was placed senior in protocol and hence started with a higher grade pay than them. He also questions the injustice of granting OROP through the backdoor through the craftily worded ‘Apex Scale’ to his Generals/Admirals and Marshalls. In the run-up of the OROP campaign, they stand exposed of accepting ‘official’ gratification for keeping the lid on similar demands from their juniors.

14 thoughts on “The Indecent Exposure – Lessons from the OROP Imbroglio”