The Girl he left behind... 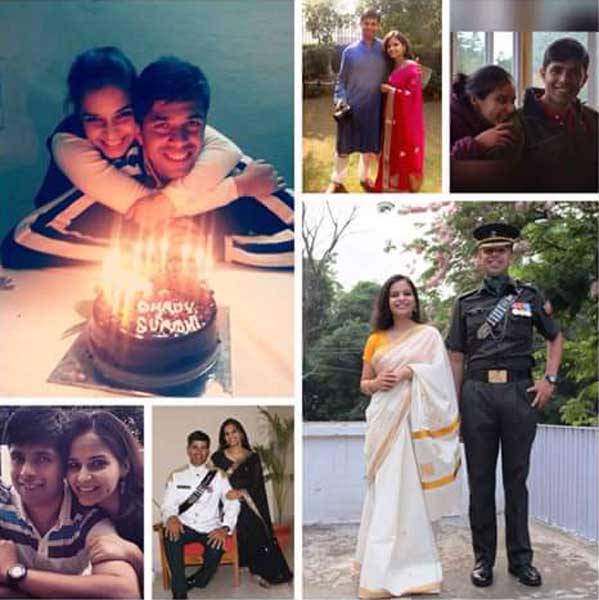 I remember the first time I met Surbhi. Dehradun, Jan 2013. This new couple had joined the battalion, and we met each other at an informal party. They were an extremely good looking couple to say the least! I also clearly remember the beautiful jacket that Surbhi was wearing, that was our conversation starter. On our very first meeting itself she promised she’d get me a similar jacket when she goes to Jaipur next. That’s Surbhi – warm, friendly and absolutely selfless. There’s, of course, a lot more to her character. To start with, she’s tiny (yes short) and absolutely stunning, and always, (and I mean ALWAYS) so well turned out. Even in her pjs she’d look so smart and cute. Maj Dhruv was also this tall and handsome officer, a little too fair may be, which would go red after a few drinks (that we found out later). The two of them complimented each other perfectly!

We kept meeting at the fauji formal dos, till one Feb evening, at a party I got really sick. Food poisoning of some sort and I had to be rushed to the hospital next morning. And guess who didn’t leave my side all day till I got back home – it was Surbhi.

On day 1, I knew Surbhi would be a great friend, but I had to wait. I couldn’t possibly force my friendship on her. We kept meeting at the fauji formal dos, till one Feb evening, at a party I got really sick. Food poisoning of some sort and I had to be rushed to the hospital next morning. And guess who didn’t leave my side all day till I got back home – it was Surbhi. That day I knew this friendship would last a lifetime.

And then started our adventures – the endless parties, the mindless giggles, the random coffee and shopping dates, the sleep overs, the movie nights, the social evenings where we danced till our feet hurt and a little more, the army ladies meets, the welfare meets, and a lot more embarrassing adventures which cannot be told here. We were making memories for a lifetime. Out of all the memories, we have our favourite ones too, and that was every time we went to Landour.

Once we went biking up there with our respective husbands. Maj Dhruv had this really really vintage bullet, he lovingly called ‘Buddhi’. It had its vintage value no doubt, but taking it up there was really courageous of him, and Surbhi of course! I don’t exactly remember how many times their bike stopped that day, and every time it did, Surbhi would spring down from the back seat, help Dhruv with the little push Buddhi needed and sprang back on the seat. It was like a drill the two of them were probably used to.

Landour was magical for all of us. And Surbhi especially loved that place. The free spirited soul that she is, every time I saw her there, it felt like she belonged there! We may have gone to Landour together a couple of times, but the two of them went over quite frequently.

While I gave my husband a tough time about not spending much time with me and playing golf on Sunday mornings, I wondered how Surbhi would be so cool and sweet about Maj Dhruv doing the same!

And another thing about Surbhi and Dhruv – while the rest of us chose popular holiday destinations like Goa and Thailand, the two always chose to go to quaint little places. They picked beautiful charming hamlets and the quaintest of homestays for their holidays. And all they needed was each other and a couple of books.

Surbhi was always grounded. She was my rock. I was eccentric and immature. And she, unknowingly brought balance in my life. I always looked up to her, and learnt from her. She had a child in her as well – as playful and carefree as ever; but she was grounded. She knew how to hold things together, be it her home or relationships. If you ever went to her place, you’d know how perfect she was aesthetically. Everything so pretty and dainty, sitting perfectly where it should be. She had a collection of things from all over the country – cushion covers from Kashmir, blue pottery from Jaipur, linen from parts of Rajasthan and Delhi, and a lot many pretty things. Her home was as perfect as her!

Our parties always happened there. I remember Diwali 2013. What a crazy crazy night that was. We literally brought the house down. Their poor neighbours probably wanted to kill us that day. And the only person to blame for all the madness was the host himself, Maj Dhruv. He was the bartender for the evening and only he knows what he did with our drinks! But you know the best part – while the rest of us had a tough time dealing with our hangover the next morning, Surbhi and Dhruv’s home was back to looking picture perfect!

Surbhi also had this thing about taking too much care of her friends. Any time I was sick, she’d make me the yummiest of khichdi and go out of her way to make me feel comfortable. She was like my mother away from home, and my best friend who always stood by my side. We had so many fun things to do and talk about, that we never really had any time for any kind of negativity, like the usual bitching thing and the likes. She was always so full of positivity – laughing, smiling and taking things easy. I always thought Maj Dhruv had the perfect partner. She was understanding beyond words. They understood each other so well, and why wouldn’t they? After all they’ve known each other ever since they’ve known the world. They were just meant to be together!

…she hadn’t met Dhruv for about 3 months due to fauji commitments. And though she rarely ever complained, she once said she was missing him way too much now.

While I gave my husband a tough time about not spending much time with me and playing golf on Sunday mornings, I wondered how Surbhi would be so cool and sweet about Maj Dhruv doing the same! I had a lot to learn from her. And out of the zillion things I did, the most important thing was to never focus on the negative things in life.

And while we continued to make happy memories, I was also counting days till our posting out. It was Nov 18, 2013. Surbhi and Dhruv’s second anniversary. Actually the night of 17th, we went over at midnight. Other friends joined in as well and we celebrated the two. While on our anniversary, most of us would like to get clicked together, I remember Surbhi sneakily clicking Maj Dhruv and his expressions. Even on their second anniversary she was like a 13 year old teenager, with a huge crush on a school senior, gushing relentlessly with butterflies fluttering around in her tummy! We finally managed to get the two of them together in one frame while Surbhi continued to blush.

I think that was the last of our parties at their place, apart from our farewell dinner which was rather short, sweet and emotional.

It was a pain for me to leave Doon and settle down in a new place. And while I struggled, I kept Surbhi well updated about my daily rants. She listened patently and always came up with a solution. And in case she couldn’t, she’d just send me a virtual hug. In the army, changing stations is a regular affair and we all promise to keep in touch. But that rarely happens, apart from the occasional wishes and likes on Facebook. But with Surbhi, I talked regularly. ‘Bambi’ she’d call me lovingly. I thought it was cute. She was my best girl. She still is. In March 2014, she came all the way to Bombay from Doon, to meet me. We had a ball of a time painting the town red. We had also been making plans for a girls’ Euro trip. Our plans got stronger and more pronounced. We knew it had to wait, but we were determined to make it happen.

Surbhi went back to Doon and spent the last few months of their Doon tenure happily strutting around with her Prince Charming, making those endless trips to Landour.

His smile, people say, was infectious – sweet, naughty, wicked; you’d never know what he’s thinking. And along with that smile of his, came “Saala”!  Never in a bad way though…always fondly.

And then, in early 2015, she gave me the best news of her life. She was going to be a mother! Their happiness knew no bounds… Maj Dhruv and her always wanted to be parents, and this was it! With love, care and happiness they were counting down the days. The child would be born in Nov, round about their fourth anniversary.

She was in her seventh month and we were getting super excited discussing the baby’s name and planning a maternity shoot. She complained she was putting on too much weight and I always told her she was glowing and looking prettier than ever! And I was also secretly making plans to give her a surprise visit when the baby arrives.

Meanwhile she hadn’t met Dhruv for about 3 months due to fauji commitments. And though she rarely ever complained, she once said she was missing him way too much now.

Maj Dhruv was in Jaisalmer with an unit exercise in the firing ranges of Pokhran. He was a fierce tankman, true to his arm, bashing on regardless.

4 thoughts on “The Girl he left behind…”