The Butterfly Effect in Ladakh 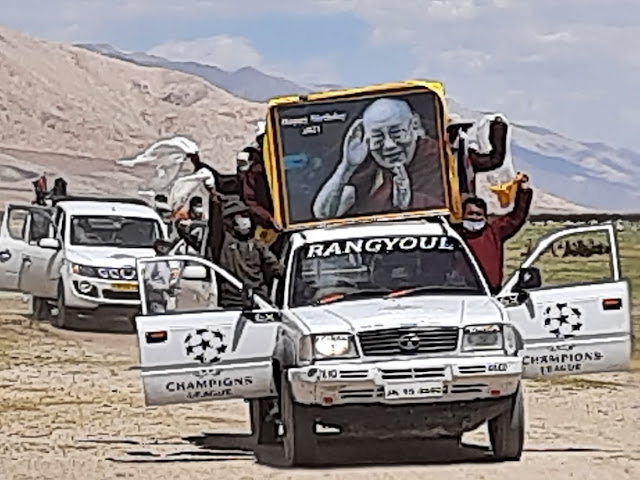 For years, China and the US, the world’s two superpowers, have been competing to win the battle of supremacy, then the Covid-19 arrived, as insignificant as the flutter of a butterfly’s wings; it has, however, triggered immense changes in the world.

The term Butterfly Effect is usually associated with the ‘chaos theory’. Mathematician and meteorologist Edward Lorenz’s discovery of the metaphorical term ‘Butterfly Effect’ is derived from his research on a tornado: Tthe time of its formation and the path it takes is often influenced by “minor perturbations such as a distant butterfly flapping its wings several weeks earlier.”

Wikipedia explained that Lorenz discovered the effect “when he observed runs of his weather model with initial condition data that were rounded in a seemingly inconsequential manner… A very small change in initial conditions had created a significantly different outcome.”

When future scholars will write the history of modern China, a landmark will certainly be the day Mao Zedong founded the People’s Republic of China from the rostrum on Tiananmen Square in October 1949; but perhaps an even more important event will be the appearance of the Covid-19 virus in Wuhan in December 2019.

In early 2020, Moustapha Dahleb, a Chadian doctor and poet, provided a great description of Covid-19, the pandemic that has been plaguing the planet, killing more than 4 million humans and affecting some 220 millions. He wrote, “Humanity Shaken by a Small Thing (Un Petit Machin).” He argued, “A small microscopic thing called coronavirus is upsetting the planet. Something invisible has come to make its law. It questions everything and upsets the established order. Everything is put back in place, otherwise, differently.”

For years, China and the US, the world’s two superpowers, have been competing to win the battle of supremacy, then the ‘petit machin’ arrived, as insignificant as the flutter of a butterfly’s wings; it has however triggered immense changes in the world, that we have started witnessing.

At the end of 2019, China was triumphant; Beijing could get any country (small or big) to obey its diktats— who could afford to lose the lucrative business opportunities ‘offered’ by the Middle Kingdom?

Countries like France were even ready to provide Beijing with a P4 Lab, with the most sophisticated technology (and its inherent dangers), despite wise voices to the contrary in Paris: “The future of our economy depends on the Middle Kingdom”, kept repeating the politicians, forgetting in the process that the Communist regime in Beijing was totalitarian and mistreated those who were not ready to follow the Party line.

In India too, the ‘trust’ with China reached such levels in February 2018 that Foreign Secretary Vijay Gokhale asked the Cabinet Secretary to issue a classified advisory note addressed to all Ministries and Departments of the Central as well as state governments not to meet the Dalai Lama.

Long ago, Napoleon Bonaparte is said to have remarked, “Let China sleep. For when she wakes, the world will tremble.”

But since one year, the planet has begun waking up to the Dragon’s belligerent behaviour and it is now the Communist regime in Beijing that has started trembling.

As often depicted in Indian epics, it is the ‘villain’ who helped Delhi to come out of its torpor; in May 2020, at a time when India was struggling with the Wuhan virus, widely acknowledged to have originated in the megacity which had ironically witnessed the ‘Consensus’ between Modi and Xi less than two years earlier, the People’s Liberation Army (PLA) advanced into several areas in Ladakh. India decided to resist the Chinese bully, something which in turn upset the Dragon further (‘How could such a small ‘non-violent’ chaotic country like India resist it for a few kilometers of territory on a desolate plateau?’).

Since then, especially after the deadly clash in Galwan in June 2020, the situation has drastically changed; apart from some hardcore ‘experts’ whose business still depends on the old relation with China, the Indian nation is today aware that business cannot continue as before …Even External Affairs Minister Dr. Jaishankar recently admitted: “…for the last one year, there has been a lot of concern about the relationship because China has not observed agreements it had signed up for when it came to our border.”

Then another flap of wing: on 6 July, the Prime Minister tweeted: “Spoke on phone to His Holiness the @DalaiLama to convey greetings on his 86th birthday. We wish him a long and healthy life.”

This simple phone call is significant for many reasons; first and foremost it shows that the Indian government is behind the Dalai Lama in his succession dispute with Beijing; it will also be noted by Beijing at a time the PLA is trying to recruit more Tibetans in its ranks, to one day raise a Tibetan unit to match the Indian Special Frontier Force (SFF), composed of Tibetan refugees in India.

It further sends a clear message to the other side of the frontier in Ladakh. Not only did the populations in Rutok county adjoining India get to know about the PM’s phone call, but this year, large crowds were allowed to celebrate the 86th anniversary of their leader in the vicinity of the LAC; some 200 Ladakhis and Tibetan refugees gathered in U Bend area of the Indus (where the river takes a turn westwards in direction of Nyoma). A car cavalcade, carrying photos of the Dalai Lama, drove around a Mani (a pile of stones with sacred mantras such as Om Mani Padme Hum), while chanting prayers for the Dalai Lama’s long and healthy life.

Obviously, the PLA ‘border guards’ posted near Dumchele, on the opposite side of the Indus, were not happy and a few soldiers in mufti displayed a red banner, protesting the event; eyewitnesses said the banner was poorly made and barely readable, showing that China had probably not anticipated the ‘special’ phone call from Delhi to Dharamsala as well as the size of the celebrations in Ladakh, which ended with a prayer and the traditional bara khana.

But that is not all, festivities also took place at Hanle, on the western side of the Ladakh range, where some 600 people assembled; it was the largest ever gathering for the Dalai Lama’s birthday; men and women dressed in their colouful attires, performed ‘happiness’ dances and played games. Similar scenes were seen near the LAC in Ladakhi villages of Koyul, Dungti, and Nyoma.

That such functions took place at a time the COVID pandemic is not fully over is a great change, especially when the border remains extremely tense, with the 12th round of talks between the 14 Corps Commander and his Chinese counterpart still to take place. The close coordination between the local sarpanchs, the civil administration, the gompas, and the defence forces made the events a great local success.

Apart from the ‘Bharat Mata ki Jai’ which reverberated on the banks of the Indus and Hanle rivers, the event remained apolitical, a première in Ladakh.

A few flaps of butterfly wings more and tectonic changes could happen in India’s China policy; it is certainly in India’s interests.