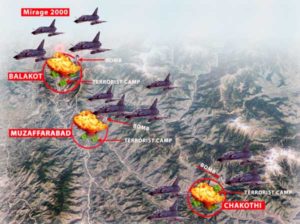 26 February 2019 marked a turning point in India’s fight against terrorism. The events of that day signified a strategic shift in the Indian approach from ‘Counter Terrorism’ operations inside own territory to ‘Counter Proxy War’ inside Pakistan. This change from a defensive to an offensive approach manifested itself in the form of the pre-emptive strike by Indian Air Force (IAF) fighter aircraft against a Jaish-e- Mohammed (JeM) training camp at Balakot in Khyber Pakhtoon Khwa, a non-military target across the International Border (IB). India’s actions against Pakistan sponsored terrorist groups has until then been confined to the Line of Control (LoC), primarily by way of fire assaults.

According to Ashley Tellis, Pakistan’s nuclear weapons serve multiple purposes against India: licence for open ended terrorism, deterrence against conventional retaliation, and catalytic device to seek international intervention to restrain Indian retribution. Pakistan’s grand strategy has been based on the assumption that there are only two steps in the escalatory ladder, ‘sub conventional war’ and ‘nuclear war’, with no space for conventional operations in between. But the IAF strike at Balakot has shaken Pakistan out of this assumption, and in the process shattered two myths. First, Islamabad’s sense of impunity in perpetrating cross border terrorism, given New Delhi’s long practised policy of strategic restraint. And second, its nuclear arsenal acting as a protection against India’s conventional retaliation.

Over the past seven decades, the corner stone of Pakistan’s national policy has been its obsession with India as an existential threat. To deal with this illusory challenge, Islamabad persistently sought strategic parity vis-a-vis New Delhi. Having repeatedly failed to achieve its grand objectives through conventional war, the Pakistan Army changed its strategy in the early 1980s. The fuelling of militancy in Punjab marked the beginning of Pakistan’s ‘Low Intensity Conflict’ (LIC) warfare against India. Around this time, President Zia’s policy of Islamization including of the military redefined its motto; Iman (faith), Taqwa (abstinence) and Jihad (war in name of god). In pursuit of its ‘bleed India strategy’, the Pakistan Army unleashed a ‘Proxy War’ in Kashmir towards the late 1980’s. The mainstay of this new game was Pakistani jihadi terrorist outfits, Lashkar-e-Taiba (LeT) and later Jaish-e-Mohammed (JeM), complemented by Hizbul Mujahidin (HM) cadres.

Ironically, India’s approach of dealing with the Pakistan sponsored ‘Proxy War’ as ‘cross border terrorism’ was a strategic blunder. What this resulted in was a tactical response: the adoption of a counter infiltration posture astride the LoC and establishment of a ‘Counter Insurgency’ grid in the hinterland. There was no action plan to take on the jihadi breeding grounds inside Pakistan or raise the costs for the Pakistan Army – the real perpetrators of the new form of warfare. This ‘low cost-high return’ option served Rawalpindi well, evident from the fact that, during the last three decades, the Indian security forces suffered over 5000 fatalities. Despite eliminating some 21000 terrorists during this period, the security situation in the Kashmir Valley remains volatile.

In response to the deadly terrorists attack carried out by JeM cadre on the Indian Army base camp in Uri on 18 September 2016, a retaliatory surgical strike was conducted by the Special Forces, targeting the terrorist launch pads across the LoC. The action was intended to give a clear political message to Pakistan, defining India’s threshold. Pakistan, following its traditional ‘policy of denial’, dismissed India’s claim of surgical strikes and chose not to react; thus remaining undeterred and continuing with the proxy war.

JeM owned up responsibility for the dastardly suicide attack on the CRPF convoy at Pulwama on 14 February 2019 which claimed more than 40 lives. However, Pakistan authorities as usual sought proof to act against the outfit. Given India’s past response to major terrorist strikes, be it on Parliament in 2001 and Mumbai in 2008, Pakistan felt assured that India’s response will be muted, at best a repeat of the 2016 type surgical operation, for which its forces were well prepared. Hence, the 26 February aerial strike at Balakot came as a shook for the Pakistani political and military leadership.

Making a departure from its ‘denial strategy’, Islamabad confirmed that the IAF aerial strike did take place but declared that there was no damage. However, the prompt retaliation by the Pakistan Air Force (PAF) employing a package of some 20 fighter aircraft the next very day vindicated India’s claims of the effectiveness of the Balakot strike. In the ensuing dog fight, Wing Commander Abhinandan piloting a MIG 21 (Bison) brought down a PAF F-16.

As a politico-military action, the Balakot operation was an astounding success. It achieved the strategic aim of conveying a clear message to Pakistan that, here on, the proxy war will be fought on its soil. The Pakistan military also felt the heat. The international community stood by India and even Pakistan’s closest allies, China and Saudi Arabia, were rather tight lipped in their response, advocating restraint. The PAF’s employment of F 16 jets, in violation of the purchase condition that they would be used only for defence and counter insurgency operations within own territory, came under close scrutiny.

Due to intense international pressure and the fear of being black listed, Pakistan has commenced action against some terrorist organizations by banning the Jamat-ud-Dawa (JuD) and Fallah-e-Insaniyat (FeF). JeM Headquarters at Bahawalpur has been reportedly taken over by the local administration. Some 144 terrorist have been arrested including the son and brother of JeM chief Masood Azhar. These actions are of cosmetic value as such measures have been taken earlier too.

In the prevailing environment, Pakistan’s effort is to somehow wriggle out of the log jam it finds itself in. Its likely strategy in the near future would be to scale down the intensity of terrorist activities to small actions by local militants. After the situation de-escalates, Pakistan is expected to be back at its game, may be with greater vigour, as spare Taliban hands from Afghanistan could well be diverted to the Kashmir Valley.

China, Pakistan’s all-weather ally, has used Pakistan as a low cost option to checkmate India. To demonstrate solidarity with Islamabad, Beijing blocked for the fourth time the move at the UN Security Council to declare Masood Azhar a global terrorist, showing utter disregard for international opinion.

Pakistan as a State is a combustible mix of religion and politics. Its Army runs the nation’s foreign and defence policies, with nuclear weapons and terrorists serving as strategic assets. Therefore, the odd aerial strike by India is not going to change Pakistan’s basic strategy of ‘proxy war’. Until Pakistan takes irreversible actions to dismantle the terrorist infrastructure and provides verifiable proof, India must not let Islamabad off the hook. This implies making cross border terrorism a cost prohibitive option for Rawalpindi.

In tune with Joseph Nye’s conception of ‘Smart Power’, India needs to combine its resources into a successful strategy through the intelligent integration and networking of diplomacy, defence, development and other tools of hard and soft power. In other words, defeating Pakistan’s Proxy War is a national effort demanding the employment of all components of ‘National Comprehensive Power’.

There is an urgent need to formulate a ‘Counter Proxy War Doctrine’ that is multi-pronged and all-encompassing. There has to be a ‘zero tolerance policy’ against Pakistan providing safe haven to terrorists. A relentless diplomatic offensive to isolate Islamabad must be sustained and cooperation with nations like Iran, Afghanistan and Bangladesh, which too are victims of Pakistan sponsored terrorism, must be scaled up. On the economic front, a concerted effort is required to tighten the noose around Pakistan through international bodies like the IMF and FATF. Militarily, all options must be on the table including covert ones, to punish Islamabad if it continues with its misadventure. Simultaneously, internal fault lines need to be addressed on priority.