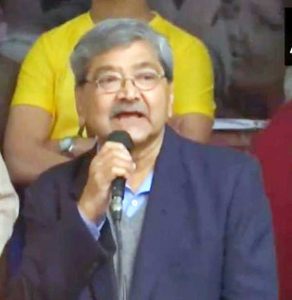 “Pakistan is not an enemy country, our armies are alike too, their army kills their people and our army kills our people, there is no difference between them.” These words were spoken by Tapan Bose, an activist and film maker from West Bengal.  For good measure he added that “the ruling class of India and Pakistan is alike.”

The statement is best ignored as being made by an ignorant person attempting to gain media limelight with sensational verbosity. However, it would compel a soldier to pause and wonder – is this person actually convinced about what he is saying? How many more in the nation think the same way?

This is not about Tapan Bose alone; it is about the proclivity among petty, media limelight hungry elements that have no compunction in sucking the Army into political debates…

This is not about Tapan Bose alone; it is about the proclivity among petty, media limelight hungry elements that have no compunction in sucking the Army into political debates even when the matter at hand does not concern the latter at all, as in this case. Tapan Bose had come to address an anti-CAA rally that has no connect with the Armed Forces, but he knew that the best way to gain publicity would be to hound the Army and that is what he did. Lo Behold! He was in the news throughout the day; objective achieved.

Do these people even pause for a moment to think what effect their loose words and utterances have on the soldiers deployed in the front? The innocent soldier who is braving great odds, challenges, deprivation and even death is left wondering about the reason that causes him to be subject to such abuse from his fellow countrymen whom he is sworn to protect. Young officers who command platoons and companies suffer pangs of guilt when their work is criticised and condemned in this manner. What face do they have to show to their soldiers whom they have to lead in combat?

A soldier would wonder whether this person (Tapan Bose) and others like him, have actually seen a border, the very volatile Line of Control.  A soldier would also wonder if such persons have somebody from their family, a friend or acquaintance serving in the forces. If they had, they would not be speaking in this manner.

If Tapan Bose is so pained about the conduct of his country’s Armed Forces surely he could have spoken to some among the thousands of Bengalis who serve the force proudly in all ranks from a Sepoy to a General. The best person in West Bengal to clear his doubts would be General Shankar Roychowdhury, who steered the Indian Army as Chief of Army Staff from November 1994 to September 1997, at a time when Pakistan sponsored terrorism was at its peak in Jammu and Kashmir. The General he has enough experience to clear all queries that Tapan Bose may have.

A soldier would wonder whether this person (Tapan Bose) and others like him, have actually seen a border, the very volatile Line of Control.

One wonders as to what kind of people from Pakistan Tapan Bose and his ilk have interacted with, apart from the many artists who throng to India to earn a living with song and dance? What has been their interaction with radicalised Pakistani hardliners, highly trained Islamic mercenary militants, war lords or designated terrorists? Are they even aware that such persons exist? Do they realise that the artists from Pakistan come to India to earn their bread and butter and have no option but to speak of their country’s yearning for peace?

The Indian Army has to bear the cross of an emotional engagement with the people of the country. On the one hand, affection touching the sky is expressed in an exhibition of national pride, on the other hand is the rock bottom in the case of people like Tapan Bose. Subjecting the performance of the army to a national debate is a welcome development in a democracy.  The debate, however, needs to be orchestrated on the basis of the traditions that drive the force.  The army is a one million strong organisation comprising of normal citizens who hail from diverse social segments from across the country. They are well trained, balanced professionals who like to stay in the shadows while performing their duty.  They are embarrassed by the adulation and perturbed by the brick bats.

The Army is a highly traditional organisation that has not changed the basic ethos and culture that it inherited from the British. This is a wise step since the system is time tested and has absorbed the collective wisdom to more than 200 years of a highly successful existence.

The flip side is that the Army cannot understand the fatuous behaviour of the internet generation of today; it does not have the capacity to ignore the raving and ranting that passes off as discussion and discourse in the modern times. It fails to comprehend that Independent India is very different from imperialist British India.

If the likes of Tapan Bose start looking at them as murdering pariahs what would be the end result? It is time to introspect; it is time to give some breathing space to the Army before it becomes too late.

If matters are not taken in hand then the force may be compelled to initiate a process of psychologically hardening the soldier against such vicious attacks, but would that be good for the nation? Do we wish to change sensitive soldiers into hardened professionals akin to mercenaries? Can the likes of Tapan Bose withstand a reaction from a soldier?

The emerging society comprises of the young and the restless who are forever in search of new challenges and greener pastures. There is no dearth in the choice of professions or careers. Under these circumstances, finding a person who is ready to sacrifice all for the sake of the country has become a herculean task. If the gratitude of the nation for the sacrifices made by the soldier becomes questionable, who will join the forces?

The army prepares every soldier to become a national asset, by and large army personnel perform well not only within the Army but outside of it in the civil stream also. If the likes of Tapan Bose start looking at them as murdering pariahs what would be the end result? It is time to introspect; it is time to give some breathing space to the Army before it becomes too late.